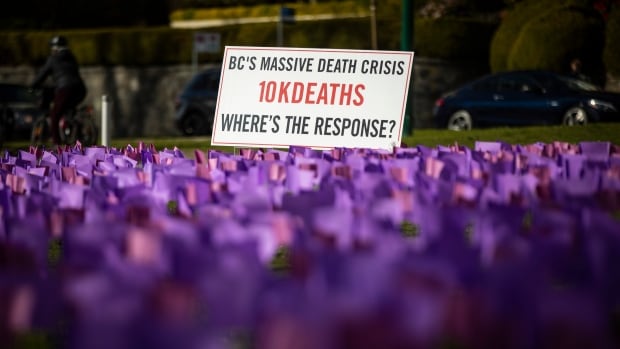 
More than 140 people died from illicit drug toxicity across B.C. during the month of June, the provincial coroners’ service says, pushing the total number of fatalities this year past 1,000.

The number of drug toxicity deaths in the first six months of 2022 is the highest ever recorded in that period of a calendar year, according to preliminary data released by the B.C. Coroners Service on Tuesday.

The tally also means more than 10,000 people have now died as a result of toxic drugs in B.C. since a public health emergency was declared in April 2016.

“These were men, women and youth from all walks of life. They lived in our neighbourhoods, worked in our workplaces and played on our sports teams. Some lived ordinary lives, while others faced enormous challenges,” Chief Coroner Lisa Lapointe wrote in a statement.

“All of them fell prey to the lethal supply of illicit drugs that is omnipresent.”

The co-founder of Moms Stop the Harm said Tuesday it’s difficult to see the sheer number of deaths continue, month after month, more than six years into a public health emergency.

After so long, she said, it’s challenging to hold the wider public’s attention.

“Each individual who dies leaves behind just a trail of grief. I just want people to understand that this tragedy, this dynamic that we’re going through, is focused on actual individuals,” said Leslie McBain, who lost her son to a prescription drug overdose in 2014.

“Every month when these numbers come out … it gets to be sort of, ‘Oh, yeah, here comes the coroner’s report. There’s going to be a bunch of deaths.’ And I don’t blame people. It’s difficult to keep focused on that.

“It does become sort of just commonplace — not to me. Not to all our members at Moms Stop the Harm and all the people who have lost a loved one.”

The data released Tuesday said 146 people died in June, down from 197 in May — a decrease of more than 26 per cent. The number of deaths was also down 17 per cent from the same month last year.

Sixteen of the people who have died this year were under the age of 19. Another 140 were between 19 and 29 years old, the report said.

“It’s an enormous and persistent issue that we see come up repeatedly — in fact, daily — in my office,” said Jennifer Charlesworth, B.C.’s representative for children and youth.

“The stats are consistently alarming.”

Charlesworth said some children survived being poisoned by toxic drugs, but suffered “questionable impact to their well-being” and lasting trauma. She said others end up in government care after losing their parents or guardians as a result of the drug supply.

Lapointe has repeated the need for a safer drug supply, as many advocates, academics and health experts have been doing since the health emergency declaration in 2016.

“We are recognizing drug use as a symptom and realizing that punishment and stigmatizing only causes further harm,” Lapointe said at a news conference Tuesday.

“Encouraging compassionate treatment and support is the only way to move British Columbians out of harm’s way and out of this public health crisis.”

According to preliminary post-mortem toxicology tests, the illicit drug supply remains extremely volatile. Fentanyl has been found in higher and higher concentrations, according to the coroners’ service.

Etizolam was detected in 39 per cent of expedited testing between July 2020 and June 2022. An analogue of benzodiazepine, etizolam is a strong sedative whose effects cannot be reversed by naloxone, which challenges first responders trying to save lives.

The coroner noted the rate of deaths in the Northern Health region rose in June, despite dropping in every other health authority.

Most people continue to die indoors, the report said.

No deaths have been reported at supervised consumption or drug overdose prevention sites. There is no indication that prescribed safe supply contributes to overdose deaths, it added.

LISTEN | Co-founder of Moms Stop The Harm speaks about the need to humanize data:

The Early Edition9:17BC Coroner will reveal the number of people that have died from toxic illicit drugs over the past six months

The BC Coroner will give an update today on the drug toxicity crisis in this province. We break down what to expect with someone speaking at the press conference. The Co-founder of Moms Stop The Harm joins us, for more.