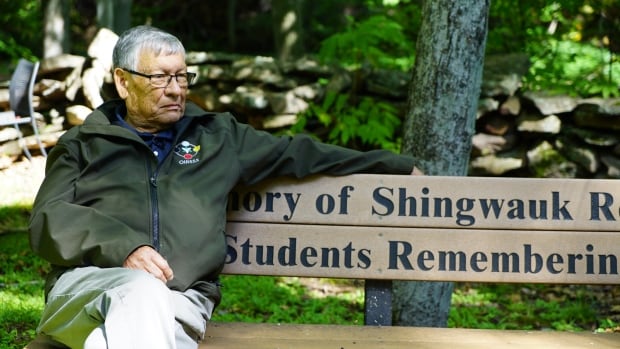 
The discovery this summer of suspected unmarked graves on the grounds of former residential schools across Canada was a stark reminder that the actual number of child deaths at these institutions is a dark unknown.

The historical record of the schools remains fragmented and incomplete — the names of thousands of students and how they died have been pulped and erased.

That’s why the federal government needs to allow the Indian status register to be used to locate the lost names of First Nation children, he says.

“If you’ve got the ways and means to move this issue along and open it up so that we as Indigenous people can … get closure on this whole aspect of these children that never came home, then do it,” said Cachagee, who attended Shingwauk residential school near Sault Ste. Marie, Ont., during his last four years in the system.

‘Then do it’: Survivor calls on government to help identify children who died

Mike Cachagee urges the government to open up the Indian status register to help search for the identities of children who died at residential schools and whose names are still unknown. 0:37

The Indian status register is used to determine who qualifies as a status First Nation person. It was established in 1951 and centralized identifying information about every individual deemed by the government to have status under the Indian Act.

It contains genealogical information on First Nations people dating back to the 1800s.

Thousands of children still to be identified

According to a 2003 internal federal government document outlining the workings of an early compensation system for residential school survivors, the federal government considered the status register — along with treaty paylists — as potential primary sources in determining who attended which schools.

“The Registered Indian Record contains information about the claimant if they are registered as a status Indian. It gives information about their name, band, and band number when they were a child,” says the document, which was provided to CBC News by researcher Edward Sadowski, who has worked with Shingwauk survivors over the past 30 years.

“When the Registered Indian Record is not available to confirm attendance at a school, treaty pay lists can be reviewed to confirm the identity of the claimant and their family members. Treaty pay lists… sometimes show when a child attended a school.”

The Truth and Reconciliation Commission (TRC), which ended its work compiling the history of the system in 2015, identified about 3,200 children who died in residential schools.

The National Centre for Truth and Reconciliation, which was created to maintain and build on the TRC’s work, raised the number to 4,117.

Murray Sinclair, the former chair of the TRC, said the number of children who never came home from the institutions may in fact range between 15,000 and 20,000.

Sadowski said the federal government destroyed files that were key to identifying those who died at the institutions — for example, Shingwauk student lists between 1907 and 1939.

Like Cachagee, Sadowski says the status register should be searched.

He said the reason it is so valuable is that it drew from files such as treaty annuity and treaty paylists — yearly payments to First Nations covered by treaties — that date back to the 1850s.

“The annuity and treaty paylists are a bit of a mess,” said Sadowski. “That’s why the government of Canada decided in 1951 to create the Indian register, which consolidated all of the records and that database has all the information about almost every First Nation person that was covered by the Indian Act.”

However, a researcher can’t just go in and comb through the status register, which is governed by Privacy Act restrictions because it contains personal information.

Individuals can only access records specific to their own families, making it difficult to use the register to identify nameless children.

“They have to open the Indian register, open it to all researchers, not just family members who are trying to look for them,” said Irene Barbeau, 77, who is president of the Children of Shingwauk Alumni Association and worked for Indian Affairs, including in its adoption research branch, until retiring in 1997.

“Wouldn’t you think that part of reconciliation is to open all your records, regardless of what it is? Then if you don’t, you might as well forget about reconciliation with Native people.”

The Shingwauk alumni association has so far identified 72 children who died at the residential school, but there are four kids whose names they are still trying to find.

For example, a 1913 report section from Indian Affairs on Shingwauk devotes four sentences to the death from illness of two girls from Garden River First Nation. The report doesn’t include their names, but describes one girl as “always frail” and the other as “a poor little paralytic.”

About two years later, two boys from Shingwauk drowned in a pond known as the “Little Lake.” No notation of their death or their names survives in the existing school record.

The only evidence of their deaths comes from a 1981 Shingwauk reunion video that includes testimony of former staff member Margaret Mclean, who said her father tried and failed to retrieve the boys’ bodies using a long pole.

WATCH | Irene Barbeau says ‘the government has to co-operate’:

Irene Barbeau says government should help researchers identity the unnamed children who died at residential schools across the country 0:35

The boys now lie buried beneath a park built atop the pond, which was filled in by the city of Sault Ste. Marie in 1960.

“My own personal hope is that we do find the [missing] children and their names and give them a proper burial ceremony,” said Barbeau.

The Crown-Indigenous Relations department sent an emailed statement to CBC News saying the federal government would be open to providing “access to information and records to help support reconciliation,” but that it is subject to the restrictions of the Privacy Act.

“We have heard from First Nations, Inuit and Métis leaders and we will continue to ensure the approaches moving forward will be Indigenous-led, survivor-centric and culturally sensitive,” said the statement.

Due to the recent election, no minister has yet been appointed to Crown-Indigenous Relations or Indigenous Services.

Suzanne Lyon retired from the public service this past January, having spent her last 10 years with Indigenous Services. She worked in stakeholder relations and was manager of new bands and band amalgamations.

In her role, she managed correspondence that came to the Indian Registrar on registration and status issues.

“There are records going back decades and to Confederation and before with respect to band membership and status and registration,” said Lyon.

She said the Indigenous Services department also has a separate database that specifically manages treaty annuity payments, which continue to this day.

The department has other databases that could help in the search for missing children, she said, including in the wills and estates sector and the genealogy research group.

“There’s a variety of databases that could be used to pull together information that could be helpful in identifying some of the children who never came home from residential school,” said Lyon.