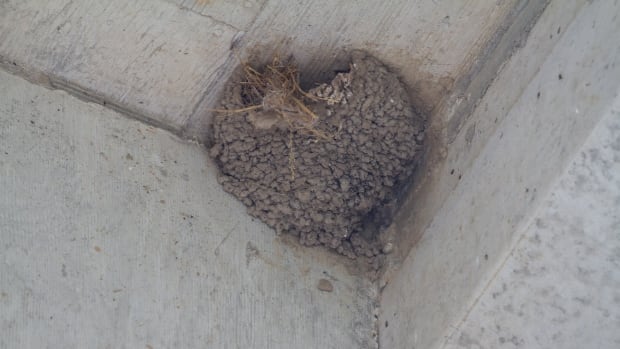 
A colony of cliff swallows that nests under the Argyle Street Bridge in Caledonia faces an uncertain future as the bridge is set to be destroyed, making way for a new one in 2023.

And Caledonia resident George Naylor says he’s been on a mission for more than a year to save the colony, believed to be the largest in southern Ontario.

At issue, Naylor says, is the fact that swallows build mud nests on concrete, but can’t build on steel — the material that the new bridge will be made of.

“I started looking into the design of it and everything I knew got worse from there,” Naylor told CBC Hamilton.

“Everything I find out about the bridge design, it’s not going to allow these cliff swallows to recolonize.”

Naylor has launched an online petition to urge the Ministry of Transportation Ontario’s (MTO) bridge replacement team to find a solution to save the colony. As of Friday, the petition has garnered more than 5,000 signatures.

Naylor said cliff swallows will build nests on concrete under a bridge or any building.

“The mud that they build their nest from will stick to concrete but it won’t stick to steel, and they need a concrete surface with a 90 degree angle like a vertical and a horizontal. So a wall and a ceiling basically,” he said.

Naylor pointed to a study published in the Arkansas Journal of Science done by Henderson University, which looked at the effects of bridge design on cliff swallow nesting success.

“That study is unequivocal. They do not nest on steel,” Naylor said.

Naylor cited the new Cayuga Bridge, downriver from the Argyle Street Bridge, as a good example of what will happen if the province goes ahead with the new steel bridge.

“There was also a large colony downstream at the bridge in Cayuga until the bridge was replaced,” he told CBC News.

“I went down and I looked at the bridge, exactly what the Caledonia bridge looks like it’s going to be, and there are no cliff swallows.

“The cliff swallow isn’t endangered. It’s not in that class of problem, but they are experiencing habitat loss.”

As part of the bridge replacement project, the province carried out a mussel relocation program.

Naylor said more than $1 million was spent to relocated the mussels, while it appears no consideration is being given to the cliff swallows.

“Last summer they had a whole bunch of workers in the river removing mussels, obviously because of the construction turmoil. They’re spending $2 million on that,” he said.

“If you’re going to spend $2 million on mussels in the river, and I’m not going to say that’s a bad idea, but at least the mussels will have a river to come back to when the bridge is finished. But the swallows, with the steel bridge, the same can’t be said.”

Preventative nesting measures will be implemented

Meanwhile, the MTO says plans are moving ahead for the replacement of the Argyle Street Bridge.

In an email to CBC News, Paola Ponilla, MTO west’s communications coordinator, said that as part of the design and environmental assessment for the Argyle Street Bridge replacement, the ministry undertook environmental field work and studies.

Those studies were to help understand, among other issues, the impacts and needed mitigation measures to protect species including cliff swallows, which are protected under the Migratory Birds Convention Act.

“The work done informed the design, and we have included specific measures in the contract to allow work to proceed while mitigating the potential impacts to migratory birds,” Ponilla wrote in the email.

“Prior to work starting and the demolition of the bridge, preventative nesting measures will be implemented.”

Protected species are regulated by the governing provincial and federal authorities.

No changes to design planned

Ponilla said the project team was aware of the swallows when the design of the Argyle Street Bridge was completed.

“No changes to the design are planned,” Ponilla wrote in the email.

According to Naylor, there are coatings that can be applied to the steel to make it more usable for the swallows to build their nests.

“Swallows are under threat everywhere around the world,” Naylor said.

“They are in trouble. And here you have a large colony that the MTO doesn’t want to include in the design of the bridge.”