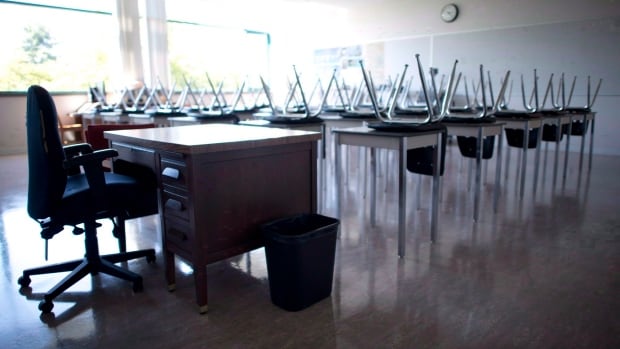 
Ontario education workers such as early childhood educators, custodians and school administration staff have voted 96.5 per cent in favour of a strike, the Canadian Union of Public Employees announced Monday.

Laura Walton, the president of CUPE’s Ontario School Board Council of Unions, says the bargaining team can now go back to the table with a clear indication of the level of support members have for CUPE’s proposals.

“[The message is that] education cuts are not acceptable, that more front-line education staff is urgently needed for students to succeed and it’s time for a meaningful wage increase for us, the lowest paid education workers who earn on average $39,000 a year,” she said at a news conference Monday.

“No one wants to strike, especially not the lowest-paid education workers in Ontario but education workers have said very clearly, if this government will not budge we are willing to strike for a contract that is good for students, for families and for workers.”

CUPE has bargaining dates scheduled with the government on Thursday, Friday, and Oct. 17 and 18.

Before a strike could happen, the union would have to ask the conciliator to issue a “no board” report, meaning a deal can’t be reached. Once that report is issued, the union would be in a legal strike position 17 days later, and it also has to give five days’ notice of any job action.

Education Minister Stephen Lecce said the results are not surprising, given education unions’ history of voting in favour of strikes, but he is nevertheless “disappointed.”

“As CUPE moves ahead towards a strike that hurts kids and disrupts families — leaving behind a reasonable offer that also protects the most generous benefits and pension plan in the country — we will continue to remain at the table to make sure kids stay in class without interruption right through to June,” Lecce said in a statement to CBC Toronto.

The government has offered raises of two per cent a year for workers making less than $40,000 and 1.25 per cent for all other workers, while CUPE is looking for annual increases of 11.7 per cent.

Walton has said the government’s offer amounts to an extra $800 a year for the average worker.

She suggested that workers can’t afford to strike and lose those wages, but they also can’t afford not to, after years of wage freezes and one per cent increases to low pay.

“We can’t afford not to fight any longer. We are literally on the brink of poverty,” Walton said.

“At this point workers cannot afford for us to come down [on our wage proposal]. We are losing workers daily. People have come to me and said, ‘I can no longer afford to keep doing the work I love.”‘

The government has noted that CUPE is also asking for five additional paid days before the start of the school year, 30 minutes of paid preparation time each day, and increasing overtime pay from a multiplier of 1.5 to 2.

Ontario’s opposition parties placed the blame for the possible strike at the feet of the government they say is refusing to ensure proper services in schools.

“This Conservative government has dragged our children to the brink of more school disruption,” NDP education critic Chandra Pasma said in a statement.

“Premier Doug Ford and Minister Stephen Lecce have been using our children’s school year as a bargaining chip, to bully the lowest-paid education workers.”

All five major education unions are in the midst of bargaining with the government after their contracts expired Aug. 31.