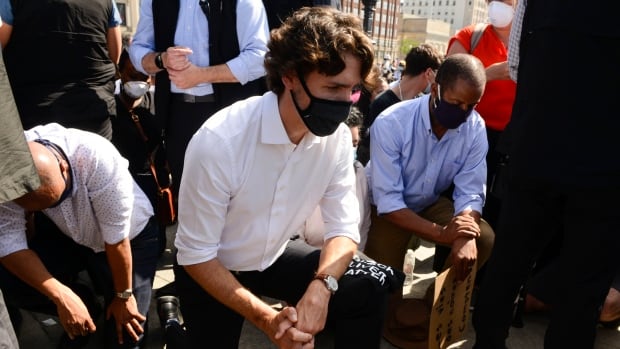 One year after Trudeau took a knee, is his government living up to its anti-racism promises?


Prime Minister Justin Trudeau took a knee at a Black Lives Matter rally on Parliament Hill over a year ago, after the murder of George Floyd sparked worldwide protests. Some welcomed the action as a commitment to fight anti-Black racism, while others dismissed it as a hollow gesture.

Shortly after that rally, the MPs and senators who make up the Parliamentary Black Caucus issued a letter listing more than 40 calls to action to confront racism. They called on the Trudeau government to go beyond mere “words and symbolic gestures” to tackle the “crisis” Black Canadians face.

“We urge all governments to act immediately. This is not a time for further discussion,” said the letter.

Several cabinet ministers, Liberal MPs and other parliamentarians endorsed the letter’s recommendations. Trudeau himself welcomed the recommendations — and while he didn’t specifically commit to implementing each one, he did say he would work with the Parliamentary Black Caucus on a path forward.

So, how much progress has the federal government made since then?

CBC News analyzed the 44 calls to action that fall within federal jurisdiction. As of Aug. 1, the government has made progress, budgeted money or proposed a bill to address 24 out of 44 calls to action. But the outcome of a widely anticipated September federal election could unravel many of those plans.

And some critics say the proposed measures still won’t be enough to bring in substantive change.

The calls to action

The directives from the parliamentary group fall under five broad categories:

How is the federal government doing so far?

Members of the Parliamentary Black Caucus said they could not provide an itemized breakdown showing where Ottawa and other levels of government are on implementing their recommendations one year later.

Liberal MP Greg Fergus (Hull-Aylmer), chair of the caucus, said the group lacks the resources to track government progress on its calls to action.

“We’re all doing this, you know, as best we can. We’re not a professional public service with all the resources that … they have available to them,” said Fergus.

CBC News has reached out to the federal departments most likely to be responsible for implementing the caucus’s recommendations. The CBC News analysis shows that there has been progress on most of the calls to action — either through budget allocations, the announcement of new programs or planned bills.

For example, the government has committed to spending $172 million over five years to collect more detailed data on women, Indigenous people and racialized communities. The government also invested $400 million in its Black Entrepreneurship Program, which is meant to provide loans up to $250,000 to Black business owners and entrepreneurs across the country.

The government proposed legislation — Bill C-22 — to amend the Criminal Code and the Controlled Drugs and Substances Act to address the overrepresentation of Indigenous, Black and other marginalized Canadians in the justice system by repealing mandatory minimum sentences for 20 offences.

But the bill is still stuck in the House of Commons and if a federal election is called soon — as many expect — it will die.

It’s not clear how much the budgeted money has actually been spent to date. Also with a potential election looming some of the programs may not see the light of day.

Rosemary Moodie is an Independent senator from Toronto and a member of the Black Caucus. She said the Liberals should be careful about boasting of progress made on criminal justice reforms when Bill C-22 still hasn’t been passed through the Senate.

Even if the bill escapes dying with an election call, she said, it still won’t go nearly far enough in addressing disproportionate incarceration rates for Black and Indigenous people.

“When you actually look at the fine, fine print on C- 22,” Moodie said, “a third of 72 mandatory minimums were addressed in that bill, leaving behind a number of mandatory minimum penalties that we felt needed to have been eliminated …”

“It’s not the progress that I think is going to materially improve the living conditions of working-class Black Canadians across the country, many of whom are still subjected to police brutality, to racial profiling in their work, in our health care systems and certainly within policing,” Green said.

Conservative MP Kenny Chiu said his party has been in consultations with Black Canadians and community business leaders and that his leader Erin O’Toole has a plan “to secure the future with higher wages, more jobs, and more economic opportunities.”

“This means jobs and growth in every sector in every part of the country,” he said in a statement.

Fergus told CBC that while he knows there’s more work to be done, the government has made gains.

“Is it at the timeline that some would desire? No, but that doesn’t diminish the fact that progress is still being made,” said Fergus, who serves as a parliamentary secretary to Prime Minister Trudeau and several portfolios in addition to chairing the Black Caucus.

Fergus said the government still needs to make progress on supporting Black artists and cultural workers. A spokesperson for Heritage Canada could not point to a program the department has rolled out to support those artists.

“Black organizations and communities are eligible for funding from all programs delivered by the Cultural Affairs Sector. However, there are no Black community-specific program subcomponents in the sector,” said Amy Mills, the department’s chief of media relations and issues management.

Several other departments contacted by CBC said they had launched programs or initiatives to target supports to Black Canadians specifically.

Employment and Social Development Canada announced Wednesday a $96 million investment through the Supporting Black Canadian Communities initiative to back 1,300 projects for Black-led organizations.

“We’ve moved in a big way,” said Social Development Minister Ahmed Hussen, a member of the Black caucus. “There’s more work to be done, of course.”