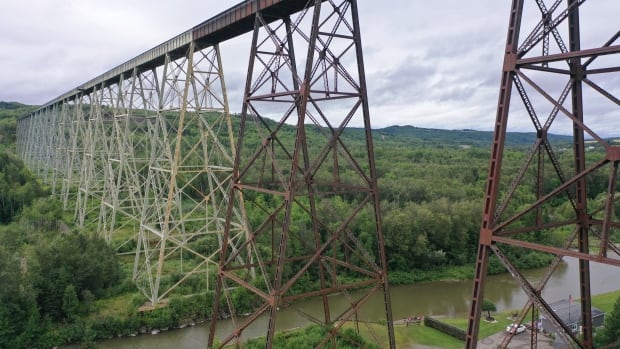 
If you stare at the Salmon River train bridge you might think you’re staring at the single biggest “thing” in New Brunswick.

The bridge towers over the homes below it, and dwarfs the surrounding forest.

When it was built, it was the second-longest train bridge in Canada, a title local people believe still stands.

On Oct. 8, 1910, Charles O. Foss, the district engineer in charge of the New Brunswick section of the National Transcontinental Railway predicted this in a newspaper article as the bridge was being built:.

“The world has seen few of these,” he said. “It has not yet seen this one. Ten years hence it will be famous.”

Today, 112-years later, despite being just 14 kilometres off the Trans–Canada Highway near Grand Falls, the bridge is likely unknown to most New Brunswickers.

WATCH | Trains float across the sky on one of Canada’s largest trestles hidden away in northwestern N.B.

The Salmon River Trestle is a hidden giant

For 112 years, the Salmon River train bridge has spanned a valley in northwestern New Brunswick, but locals say few in the province would know about it.

When the Salmon River Trestle was completed in February 1911, newspapers said it was 4,000 feet (1.22 kilometres) long and 200 feet (61 metres) deep. Its dimensions were second only to the more famous Lethbridge Viaduct in Alberta, which was 1.6 kilometres long.

“It’s monstrous,” said Eudore Michaud, who lives with his wife in a house he built in the shadow of the bridge.

CBC News requested specific details from CN Rail about its length and height, but a spokesperson said the company wouldn’t participate in this article because it didn’t want to encourage people to climb or illegally cross the bridge.

Despite its size, Michaud said, he would free-climb his way to the top in his younger years. The stomach-churning climb was “quicker than going around” the long way to reach the other side of the Salmon River valley in his home community of New Denmark.

“That bridge there, I was born on the other side,” Michaud said. The oldest of 18 children, he says he grew up comforted by the dull but steady roar of the trains passing overhead.

It was a sound he missed for 18 years after moving to Montreal. But he and his wife eventually moved back and live pretty much under the Salmon River Trestle.

By his count, it’s not uncommon to have 10 trains a day pass overhead. Those trains are his alarm clock, with one passing over his home at around 10 o’clock almost every night, letting him know he should be in bed.

“That makes me sleep,” said Michaud. “I love it. There’s no place like here.”

There are more than a dozen homes like Michaud’s under the looming trestle, which articles published at the time of its construction said is made up of more than “7,000 tons of steel.”

But as impressive as it is to have trains 60 metres above your home, watching them float across the skyline is what makes the trestle a centrepiece of New Denmark for those who live nearby.

When Gunnar Pedersen came to Canada with his family from Denmark in 1928, the bridge had already been built. His family spent their lives building a farm with the monstrous bridge on the horizon.

“It’s quite a landmark,” said Pedersen, who describes the bridge as beautiful and special.

He has spent a good chunk of time with his son-in-law building a replica of the Salmon River Trestle that fills much of his family’s farmhouse sun room.

“We tried to make it as accurate as the real bridge,” said Pedersen. “All the pieces are made of wood instead of cast iron or steel.”

It’s complete with an electric model train that crosses the bridge to reach a miniature of the former New Denmark train station that Pedersen also built.

The real trestle that inspired it can be seen just out the window.

“I know there’s a few months on there,” Pedersen said of the time it took to complete the model. “I really never mark down the hours.”

His son-in-law Ray Christensen cut the pieces and Pedersen put them together. He said it gave them both an appreciation for the effort it took to build the connection on the mainline for transporting goods between Moncton and Quebec.

“It’s pretty amazing,” said Ray Christensen. “It is really — it’s a great feat of engineering and building, especially for the time when they built it.”

According to documents provided by the Provincial Archives of New Brunswick, the bridge was one of the last steps  in the $15 million rail line project.

Engineer Foss was quoted in newspapers at the time as saying “The completion of the line in New Brunswick will be delayed by the construction of the steel bridges and aqueducts. The bridge over Salmon River in Victoria County alone will keep a large erection gang busy all summer.”

But despite the claims at the time that the bridge would become world famous, locals say it’s a wonder they get to enjoy it in near solitude.

Michaud, Pedersen, and Christensen all said they occasionally see cars stop suddenly, with people jumping out to snap pictures or just to stare. But for the most part, the Salmon River Trestle is a treasure they get to keep to themselves.

People should “probably be aware of it, of all the beauty that we have here in our own province,” Christensen said. “And, I guess, probably not take it for granted.”

Musk’s stunning declaration for the future