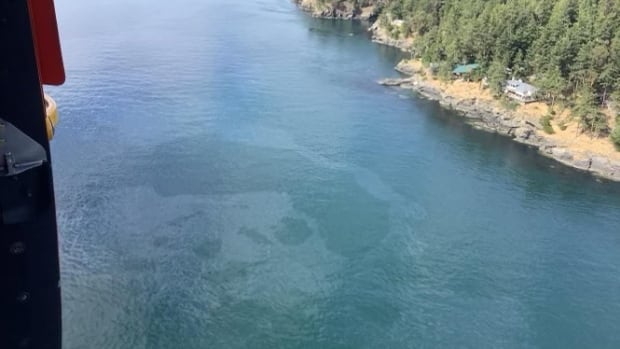 
Crews are assessing the waters off San Juan Island in the Salish Sea near Vancouver Island after a fishing boat sank and leaked fuel on Saturday.

The Aleutian Isle had nearly 9,840 litres of oil and diesel on board when it went down off the west coast of San Juan Island in Washington state.

Gerald Graham, a Victoria-based consultant who specializes in marine oil spill response and prevention, said the diesel fuel flowing from the boat is very light, which means crews can’t use booms or skimmers to clean it up.

“In the open water, there’s virtually nothing you can do because the oil would either splash over a boom or go under it.”

He said the best thing to do would be to try to stem the leak and siphon the remaining oil off the wreck.

Although the spill is technically in U.S. waters, there is potential for it to move into Canada, which means both U.S. and Canadian coast guards are responding. The two groups train together to prepare for such situations.

The Canadian Coast Guard says it will be conducting assessments from the air and on the water Monday to determine the extent the leak has spread. As of Monday morning, no Canadian shorelines had been affected.

On Sunday, a release from the U.S. Coast Guard (USCG) said divers would try to reach the sunken Aleutian Isle on Monday to better assess its condition, plug its vents and begin removing fuel from the vessel.

USCG Petty Officer Michael Clark said investigations are underway to determine whether the boat and its crew were disobeying laws regarding water pollution. If they are found liable, said Clark, they could be fined.

<a href=”https://twitter.com/hashtag/MorningUpdate?src=hash&amp;ref_src=twsrc%5Etfw”>#MorningUpdate</a> – Unified Command crews continued monitoring the spill throughout the evening. A Coast Guard operated drone is planning to launch later this morning to collect additional imagery. As a reminder there is a 1,000 yard safety zone around all responding dive boats. <a href=”https://t.co/0mc5d3bLcX”>pic.twitter.com/0mc5d3bLcX</a>

Graham said orcas were spotted in the area on Saturday afternoon but they turned around and went west up the Strait of Juan de Fuca between Vancouver Island and Washington’s Olympic Peninsula — which he said “is not typical for them.”

“They usually make a beeline for Haro Strait [between Vancouver Island and San Juan Island] and go up the west coast of San Juan Island, hugging the coast. This time they turned around, so it is extremely fortunate,” Graham said.

But he worries killer whales might return to the area. Oil spills can cause skin irritations in orcas and the vapours are toxic.

According to a tweet from the USCG, any sightings of animals with oil on them can be reported to the Washington Department of Fish and Wildlife at 1-800-22-BIRDS.

The Early Edition8:12Update on the sunken vessel off the coast of San Juan Island

A fishing vessel went down on Saturday and reports say it had about 9,800 litres of diesel and oil on board. Gerald Graham is a Victoria-based consultant who specializes in marine oil spill prevention and response planning.