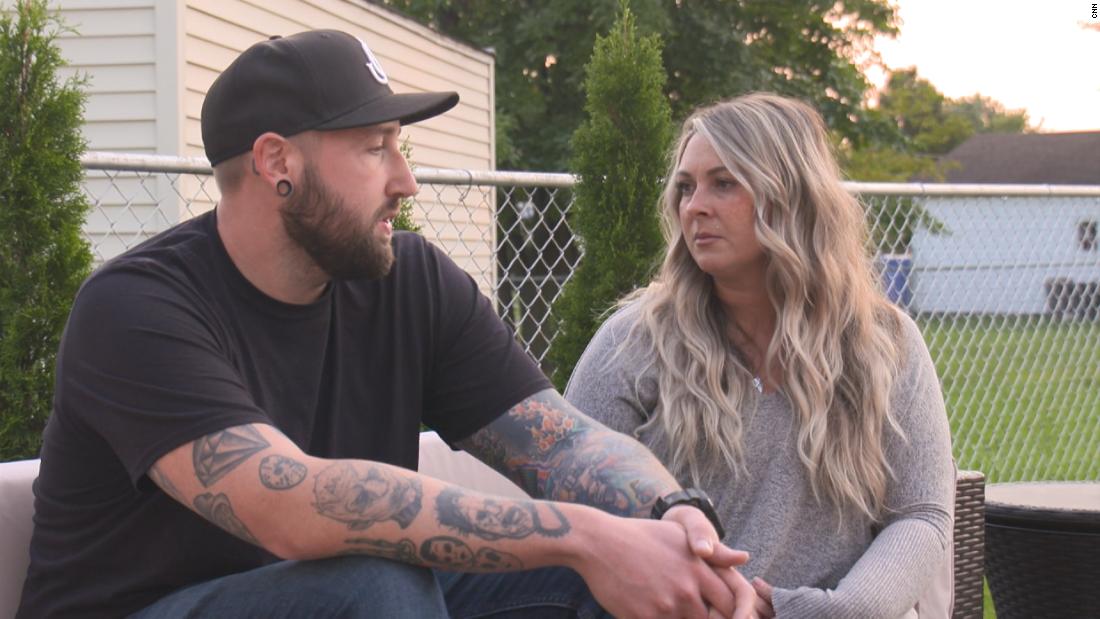 During that July ultrasound, Winchester noticed there was no amniotic fluid around the baby. More tests that day and the next morning indicated the baby was in kidney failure and had multiple heart defects.

Medical records spell it out in cold scientific terms: the baby had “lethal fetal anomalies.”

That harsh reality sent Winchester, Tara, and her husband, Justin, on a fight to get her the right medical care — a fight that would pit them against Ohio’s strict anti-abortion law as well as against the hospital where Winchester works.

In April, Tara, 34, and Justin, 33, had been thrilled to learn she was pregnant. They sent ultrasound photos to friends and family and named their baby Griffyn. Justin, a sports podcaster, bought his son onesies with logos of his beloved Cleveland teams.

“All I could think of was just hanging out watching sports, taking him to games, just having fun, somebody to play with,” Justin said. “Just doing everything a dad would do with his son. We were so excited.”

“We already had picked a date for the baby shower,” Tara said. “We were really looking forward to it.”

When the tests showed the baby was in kidney failure and had heart defects, Tara was 20 weeks pregnant. She and Justin had a painful decision to make.

One option was to carry on with the pregnancy. The baby might be stillborn, but even if he was born alive, he would survive for a few hours at most, Winchester said.

Carrying the baby to term put Tara’s life at risk: She has a blood clotting disorder and an auto-immune condition, which put her at high risk for hemorrhaging, clotting and preeclampsia — all potentially deadly complications.

“When you have a baby that will never make it, a baby that’s going to be faced with a potentially very difficult couple of hours of life, we have to really think hard about if we want to put Tara’s life at risk for that,” Winchester, an assistant professor at Case Western Reserve University School of Medicine, told CNN.

The other option was abortion. After careful consideration, Tara and Justin chose to terminate the pregnancy, both to protect Tara’s life and to prevent Griffyn from suffering.

“I can only imagine being born and not having organs that are functioning like at all — it would be horrible,” Tara told CNN.

A doctor fights for her patient

Winchester told Tara she thought she could get the abortion at home in Ohio, even though just weeks before, in the wake of the Supreme Court’s reversal of Roe v. Wade, a law had taken effect prohibiting abortions as early as six weeks into a pregnancy.

But she says she consulted with a hospital lawyer, who said Tara couldn’t get the abortion because of the new Ohio law.

“When I had to call Tara and tell her that we couldn’t do it – that was really difficult,” Winchester said.

“It was awful because not only were we told no, then the next step was kind of thinking, OK, well who’s going to help us?” Tara said. “Where do we go from here?”

“I literally have never felt more helpless in my life,” Justin added.

Winchester and the Georges asked CNN not to name the hospital. CNN reached out to the hospital, and a spokesperson said they “do not comment on an individual patient’s care.”

After Winchester says the hospital lawyer directed her not to perform the abortion, she reached out to colleagues in nearby states to find a place as close as possible where Tara could get the procedure. That process took several days, partly because abortion laws in neighboring states were in flux.

“She had to wait,” Winchester said. “And if something happened to her in that waiting period, that would make me feel terrible.”

In the midst of their grief, Tara and Justin drove nearly three hours to Michigan, where they spent two days to get the procedure. Justin told jokes and sang songs to keep Tara’s spirits up, but he knew it was no use.

“It was devastating,” he said.

They had to pay for a hotel and lost days of pay from her work as a hair stylist and his work as a quality manager at a steel factory.

But the worst part, Tara said, was how “scary” and “worrisome” it was to be in an unfamiliar hospital with doctors they had never met before.

CNN asked Ohio Sen. Kristina Roegner, the primary sponsor of the state’s anti-abortion law, to comment on Tara’s situation. She did not respond.

A spokesperson for Ohio Right to Life, which lobbied for the Ohio anti-abortion law, did respond to CNN’s request for comment about Tara’s situation.

“Ohio Right to Life offers our sincerest condolences to the couple,” Elizabeth Whitmarsh, the spokesperson, wrote in an email to CNN. “However, the answer to the child’s suffering is never to purposely kill it. We do not kill human beings simply because of a malady they have … It is inhumane to treat an unborn child as though they are a pet to ‘put down’ due to an illness.”

“I don’t think anyone, whether Ohio Right to Life or the government, should be presuming to make these really personal, life-changing decisions for people,” said Jessie Hill, an attorney who has been fighting Ohio’s anti-abortion law in the courts.

In her email, Whitmarsh said protections for the mother are “extremely clear” under Ohio law and that “the life of the mother is protected by the law undeniably.”

Hill, a professor at Case Western Reserve University School of Law and a specialist in reproductive rights, said that’s incorrect.

Ohio law allows for abortion to “prevent the death” of the mother, or when there’s a “serious risk of the substantial and irreversible impairment of a major bodily function.”

But Hill says the law doesn’t explain exactly what qualifies as a “serious risk,” so doctors and hospitals don’t know under what medical circumstances an abortion would be legally permitted.

Since there are such strict penalties for violating the Ohio law — a doctor could face the loss of their medical license, monetary damages and prison time — Hill said doctors and hospitals are reluctant to get even close to violating it.

“Doctors are just not sure how sick is sick enough,” Hill said. “There’s just a lot of uncertainty and a lot of fear around this right now.

For example, Ohio law mentions preeclampsia as a condition that constitutes a serious risk to the mother, but it doesn’t say whether the mother has to have preeclampsia, or just be at high risk for it.

The law “might imply that anything short of full-fledged preeclampsia is not going to be enough for the doctor to feel comfortable proceeding because that’s not what’s named in the statute,” Hill said, adding that “it’s a reasonable reading” that being at high risk is not enough to warrant an abortion “because if the law requires preeclampsia, then that kind of suggests that something falling short of preeclampsia is not enough.”

Other women reveal their abortion experiences

Tara and Justin say they’re telling their story to help women in states like Ohio who might also be experiencing a potentially dangerous pregnancy, but don’t have the resources they have.

“We were lucky enough to where we could miss work, we could afford to get a hotel, to travel out of state. Not everybody can do that,” Justin said. “I’m very fearful for any woman out there who maybe doesn’t have family or support, doesn’t have a vehicle… What is she supposed to do?”

Other women have also come forward to tell their stories.

Last week, model Chrissy Teigen talked about her 2020 pregnancy with her son, Jack.

“It became very clear around halfway through that he would not survive, and that I wouldn’t either without any medical intervention,” Teigen said, according to the Hollywood Reporter. She explained that she then had “an abortion to save my life for a baby that had absolutely no chance.”

In July, Marlena Stell told CNN that she had to walk around for at least two weeks with remains of her dead fetus inside her because of Texas’s strict anti-abortion laws.
Earlier this month, Kailee DeSpain told CNN that she, like Tara, was at high risk for pregnancy complications and was carrying a child who wouldn’t survive for long outside the womb. DeSpain was unable to get an abortion in Texas and had to drive 10 hours to New Mexico to get the procedure.

On September 14, an Ohio judge temporarily blocked the state’s abortion law, restoring for 14 days abortion access in the state up to 20 weeks after fertilization.

Justin and Tara still want to have a family, but Ohio’s changing laws make them “nervous” and “unsure” because they “have no idea what the laws [will] look like,” Tara said.

“All of our family is here, our friends are here, our jobs are here,” she said. “[We’re] just trying to hope that something changes for the better so that we can stay here.”

CNN’s John Bonifield and and Lisa Respers France contributed to this report.