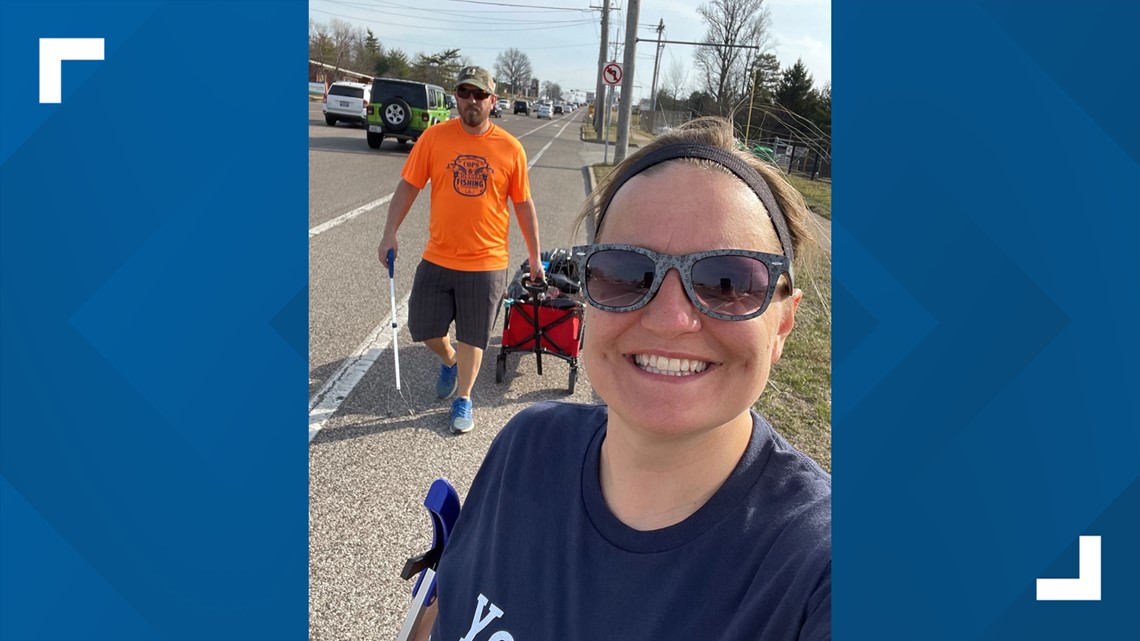 Dave and Jenny Bess got tired of looking at litter on their daily walks, so they started doing something about it

It’s what Dave and Jenny Bess do every season.

“He started walking with me,” explains Jenny, “and it was really nice. We could catch up on our day and catch up on what the kids were doing.  The second or third time, he said I saw some trash up the street. Next time we go for a walk we’re bringing a trash bag with us. I’m like ‘wow, okay do-gooder, whatever.'”

And now it’s become a mission of sorts.

If you’ve driven anywhere in Oakville, Missouri you have likely spotted the “Clean-up Couple” putting trash in its place.

“There’s certain things like you can control, “says Dave. “I can’t control people littering all over the roads, but I can control picking up the trash. So, I thought ‘I’m tired of looking at it, I’m going to do something about it. I’m going to pick it up.'”

During the pandemic, they couldn’t go out to eat so date night became waste night.

“We got tired of bending over so then we eventually bought a couple of these (grabber tools) online,” Jenny said with a laugh.

But this really all began years ago.

Dave still remembers things he learned as a kid from the Missouri Dept. of Conservation.

“Part of their curriculum is teaching people, leave the land in better condition than you used it,” he recalled.

And now they’re just passing on that love of nature to their kids.

“That’s been my mission,” Jenny said. “The last few years instead of going just to the beach or going to Disney,  we’ve been taking our kids and showing them the different national parks across America and how wonderful they are.”

Of course, when you do this as often as they do, sometimes what they find isn’t trash, it’s treasure. The Bess’ say they’ve picked up everything from unused lottery tickets to gold jewelry.  But the real gem is just the thank-you’s.

“I think what’s most rewarding,” said Dave, “is when people go by and they honk their horn and they say thanks. Or we see other people and neighborhood picking up and we wonder, were we motivation for them?”

So, the next time you see Dave and Jenny Bess waste management, remember their hope is that one day Oakville will be a town that’s self-cleaning. Yourself and their self.

“Hopefully they’re inspired to pick up the mess, “Dave says. “So the next time I go out that I’m not lugging back a 50-pound bag of trash. Maybe just a 10-pound bag.”

Dave and Jenny Bess hoping that one day soon that the residents of Oakville will help them make a clean getaway.

“I guess we just hope it inspires other people,” Jenny said.