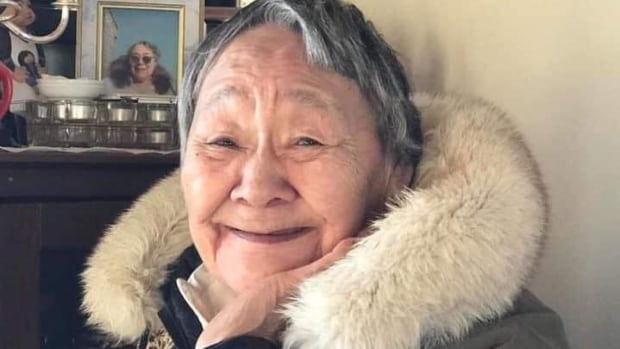 
The daughter of an Igloolik woman who died in Iqaluit’s hospital says nurses tagged and wrapped her mother’s body in plastic in front of her — and then left her body in the morgue for nine days while the family waited to find out when her body would be sent home for burial.

Jeela Palluq-Cloutier, the daughter of Eunice Palluq, is calling for an apology from Nunavut’s health department over the treatment of Palluq’s body.

Eunice, 75, was medevac’d to Iqaluit from Igloolik in August. She died Sept. 13 of lung cancer.

In an Oct. 3 letter to Health Minister John Main, Palluq-Cloutier wrote that the family was grateful for the care she received at the Qikiqtani General Hospital, but “disturbed” by what happened after she died.

Palluq-Cloutier said she and her family dressed Eunice’s body “so she could be taken away with dignity,” only to have the nurses tag her body and wrap her in a plastic bag right in front of Eunice’s children and spouse.

“This was quite unusual and very disturbing,” Palluq-Cloutier wrote to Main.

Family members had to leave the room, she said, because they couldn’t bear the sight.

‘Forgotten’ at the morgue

What happened in the days that followed disturbed them even more.

A brochure from the hospital, provided to CBC by Nunavut’s health department, says it’s the family’s responsibility to call the funeral home to pick up a body. But Palluq-Cloutier says that information was never provided to her, and Qikiqtani Funeral Services says it’s the hospital that usually makes that call, not families.

The brochure also says that transportation for deaths occurring on medical travel — like Eunice’s — can be arranged through the medical travel team. The hospital asks that arrangements be made within four days. Palluq-Cloutier says the medical travel office booked her mother’s medical escorts to return home, but not her body.

Eunice’s body lay in the morgue for nine days before the undertaker happened, by chance, to find her when he came to pick up a different body.

Palluq-Cloutier said after her mother’s death, her family expected her body to be sent home to Igloolik for burial. Days and weeks passed without word.

In an interview with CBC, Palluq-Cloutier said the family trusted hospital staff to take care of Eunice’s body properly and make sure she was sent home.

Eventually, as Palluq-Cloutier tried to find out what had happened to Eunice’s body, she called the coroner, who passed her on to the undertaker.

It was then she found out no one had informed the undertaker there was a body to pick up, and he only learned about it on Sept. 22 when he went to collect a different body.

Even then, Eunice’s body was not sent home until Sept. 28.

“I felt horrified. I felt very disturbed, and I was very sorry to mother and our family, waiting in Igloolik to bury her. I felt even angry at the system, and ourselves, that we had given too much trust in the system,” Palluq-Cloutier said.

“Nobody should be forgotten and just waiting in a morgue.”

She said she isn’t sure whether it’s a normal procedure to wrap a body in plastic in front of family members, but she would like to see that change too.

“I don’t think that should even be happening,” she said.

Jaffar Gebara of Qikiqtani Funeral Services said he wouldn’t have known that Eunice Palluq’s body was waiting to be sent home if he hadn’t gone to the morgue to see about another death. He said he expected one body that day, but found two.

“I was never notified,” he said. “If there weren’t another passing, I would not have gone in.”

Gebara said generally he is called within 24 hours of a patient’s death and is provided with a registration of death to use for booking flights to return a body home.

He added this isn’t the first time communication hasn’t happened.

Gebara said the time it takes to send a body home has also been increased by at least a week, and sometimes more, since Nunavut’s two largest airlines merged in 2019.

In an email to CBC News, Canadian North said it usually flies bodies home within 24 hours of a request, but that isn’t always the case.

The Department of Health declined to comment but acknowledged it had received Palluq-Cloutier’s letter. It said it has directed the matter to patient relations for review.

Palluq-Cloutier said she has not heard from patient services yet or received any response to her letter.