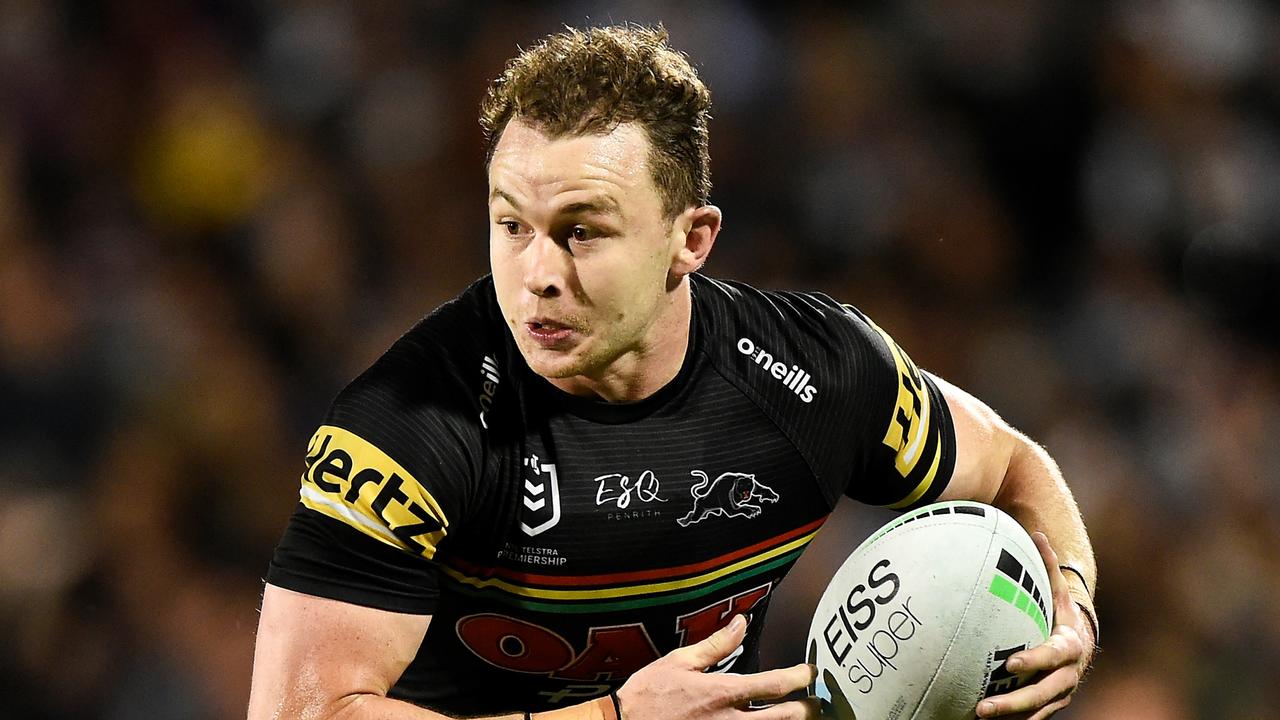 Penrith has confirmed it is taking a risk on star fullback Dylan Edwards just minutes after it was revealed he will need an injection to play.

Welcome to our live coverage of the 2021 NRL Grand Final between the Rabbitohs and Panthers.

South Sydney and Penrith stars have been on fire this finals series, but it is the running war of words between coaches Wayne Bennett and Ivan Cleary that has dominated the build up to the blockbuster in Brisbane.

You can read all the important details for the decider in our ultimate guide and check the exact kick-off time or your state here.

More than 50,000 supporters were initially expected to attend a sold out Grand Final at Suncorp Stadium, but during the week the Covid outbreak meant capacity was slashed to 75 per cent.

Penrith fullback Dylan Edwards has proven his fitness in the pre-game warm-up and has been named in the Panthers’ official team for the Grand Final.

Edwards’ foot injury was the biggest talking point on Sunday after he was spotted at the team’s training walk at Suncorp Stadium on Sunday morning resting on crutches and wearing a moon boot.

Edwards has managed a foot injury in recent weeks and has previously worn the moon boot in the lead up to the Panthers’ earlier games in the finals series.

Former Panthers supremo Phil Gould posted on Twitter Edwards will have received a pain-killing injection in the minutes before the opening kick-off.

“He hasn’t trained for a few weeks. Gets needles to play,” Gould posted on Twitter.

Penrith’s official team sheet showed one surprise with Viliame Kikau moving to the bench and Liam Martin replacing him in the second row.

South Sydney has not made any changes to the 17-player team announced on Tuesday.

“He’s started the week on crutches and a moon boot for the last three weeks – it’s just to take weight off the foot. “He was one of our best last week, he’s very important to our team. I’m sure both teams that are carrying injuries, we certainly have.”

Ivan Cleary is reported to have knocked back a request to be interviewed on game day in a move he hasn’t made all year.

Broncos legend Gorden Tallis on Sunday slammed the Panthers mentor and players for failing to promote the sport in Brisbane this week.

Cleary has exchanged verbal barbs with Bennett in recent weeks but has tried to remain in the shadows this week.

Hooper claimed Cleary had done “himself a disservice” with how he behaved this week.

“I understand it got pretty heated between him and Wayne a month ago and he obviously took some lessons out of that but this is the biggest game of the year,” said Hooper.

“He’s knocked back Triple M today for a pre-game interview. I think he’s done every single one when they have been requested across the course of this season.

Tallis said: “We don’t pay as much as TV but we are still partners,” Tallis said of Triple M. “You’re not talking to me, in the States you can interview Michael Jordan two hours before he plays.

“That’s why all our players wear NBA gear.

“All the players walk the street with their hat backwards with a LeBron James singlet or Kobe Bryant because you watch those guys every week selling their brand.

“It’s not the coach’s fault, nor is it the player’s fault. It’s the game’s fault. We have got to be stronger on it.”

South Sydney has made a decision to award banned star Latrell Mitchell a premiership ring if the club wins on Sunday night.

The fullback has been suspended since Round 24 following a horror high tackle on Roosters centre Joey Manu.

According to The Daily Telegraph, the Rabbitohs plan to purchase 12 more premiership rings — valued at $5000 — to add to the 20 rings the NRL will hand to the club for the 17 players in the Grand Final and other top members of the coaching staff.

The Rabbitohs have made the decision to commission so many more rings in order to honour the players and senior officials that have made sacrifices this year inside the NRL’s biosecurity protocols.

Mahwah crash: Driver killed after gasoline tanker crashes and burns on I-287 in New Jersey