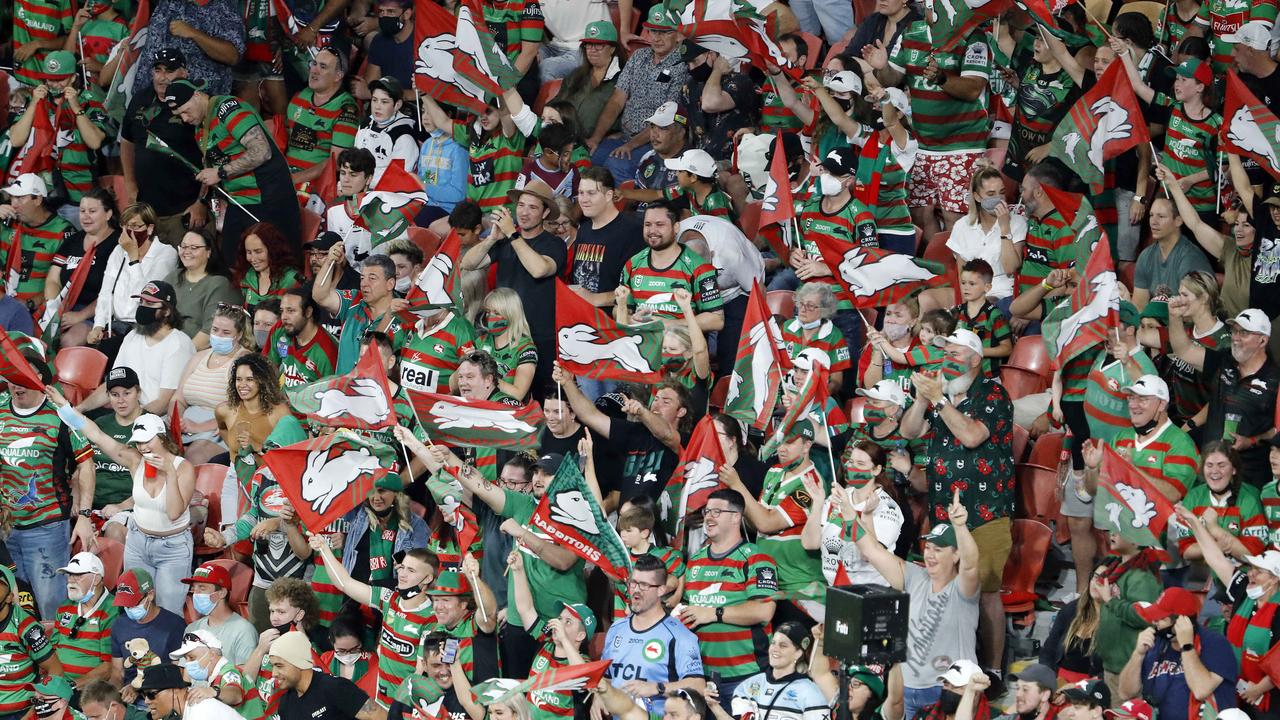 Despite a stern warning to fans to be on their best behaviour, most of the crowd at the NRL grand final blatantly flouted Covid guidelines.

Despite being warned to be on their best behaviour, most of the crowd at the NRL Grand Final appeared to flout Covid-19 guidelines.

As Penrith defeated South Sydney in a thrilling season finale at Brisbane’s Suncorp Stadium — the first time the game has been played outside of Sydney — fans were living it up.

Following concerns earlier in the week the Grand Final venue would be changed due to a Covid outbreak in Brisbane, the crowd capacity was reduced to 75 per cent, with 39,000 fans able to attend the biggest game on the rugby league calendar.

Queensland Premier Annastacia Palaszczuk had a message for footy fans on Sunday, reminding them to adhere to strict Covid-safe protocols when in the stands — particularly when it came to mask-wearing. All spectators were told to keep their mask on unless eating or drinking.

“Can I say to people who are attending, you have to check into the stadium, you have to wear your mask in there and you can only remove your mask when you are seated if you are eating or drinking,” Ms Palaszczuk said.

“That doesn’t mean sitting there with a beer and having the mask off — it’s only when you are drinking.

“We have to do this to keep everyone safe so I am making it very clear that these are the conditions that have been put on by Dr Young and that is what I expect everyone to do.”

But many fans in the crowd at Suncorp Stadium seemed to ignore Ms Palaszczuk’s instructions, as these images show.

Large sections of supporters were spotted not wearing masks at all, even when not eating or drinking, while many were only wearing theirs around their chin.

Infectious disease specialist Dr Nick Coatsworth said “it’s possible” there may be a spike in Covid-19 cases because of the Grand Final.

“I do get a bit nervous when I see large crowds of people without masks,” he told Today.

Viewers were concerned at what seemed to be a lack of adherence to mask wearing, as well as the sight of most of the 39,000 fans packed tightly into the bottom decks of the grandstands.

Pundits questioned the NRL’s decision not to use the upper sections of the stadium to spread out the spectators and exercise social distancing.

“Lucky the Qld government pulled the capacity back to 75 per cent much safer,” reporter Steve Hart joked.

Journalist Eliza Berlage tweeted: “Seen about three people in the crowd wearing a mask correctly let alone at all.”

Sports reporter Mark Gottlieb wasn’t impressed with the lack of social distancing in the crowd.

“This is disgraceful,” he tweeted. “For all their talk of last 25 per cent of each bay losing out it looks like they’ve just punted the cheapest tickets.”

5,000 travellers who defied hotel quarantine rules got big fines, but no sign of fines in Alberta