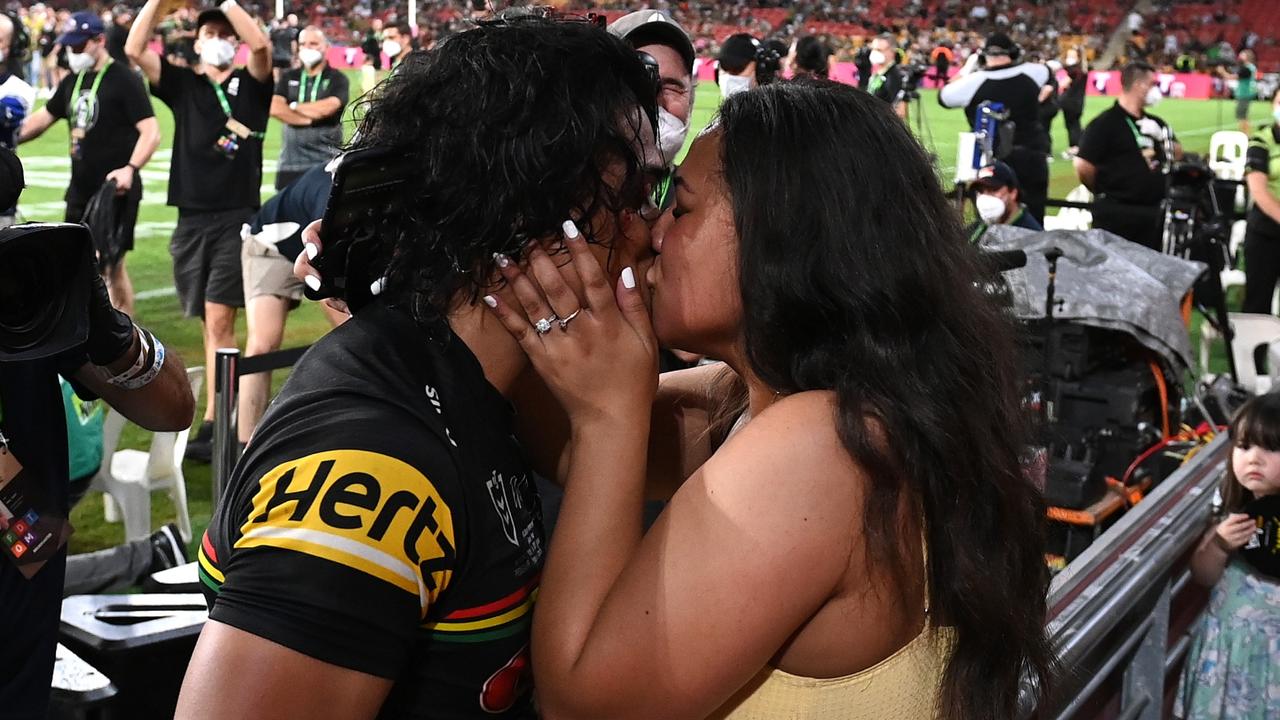 Following a nailbiting 80 minutes of rugby league at Suncorp Stadium, the Panthers were crowned 2021 NRL premiers after securing a 14-12 victory over the South Sydney Rabbitohs.

Amid the celebrations, To’o found his partner Moesha Fuifui in the crowd of 39,000 and proposed with some blood still seeping from a gash in his eyebrow.

Watch Fox League‘s massive line-up of Grand Final week coverage on Kayo including live pre-game, halftime and post-game coverage with full analysis from the best team in the business. New to Kayo? Start your free trial >

The 23-year-old’s girlfriend broke down in tears, with the Channel 9 cameras capturing the beautiful moment they embraced.

To’o was inevitably mobbed by his teammates after she said yes.

“He’ll get a premiership ring tonight, but it looks like he’s brought his own bling as well,” Channel 9 presenter James Bracey said.

Fuifui told Channel 9: “I thought he was just coming to give me a hug, like he usually does. I wasn’t expecting that.”

To’o continued: “I just want to thank my beautiful partner for saying yes.”

The Panthers weapon, named on the wing in the Dally M team of the year on Monday night, re-aggravated an injury to his left ankle during last weekend’s 10-6 preliminary final win over the Melbourne Storm.

It was the same ankle concern that forced To’o to miss the previous week’s finals win over the Parramatta Eels.

Earlier this week, To’o said that before he runs out for the season finale he would draw on some words of wisdom from Fuifui, who was staying with him in camp on the Sunshine Coast.

“She always tells me, ‘Go with God’. Those three words work every time and always gets me through,” To’o said.

“My partner doesn’t like it when I get hurt, but she loves me to death and supports me through everything.

“She always gets worried about the injuries I get, but I just tell her that it comes with the job. I guess that is just the norm for me because I am always getting injured.”

Penrith are champions of the NRL for the first time since 2003 after an iconic Grand Final that was absolutely heartbreaking for Rabbitohs fans and halfback Adam Reynolds.

Reynolds had a late conversion attempt from the sideline to tie the game up, but his kick sailed wide — triggering the Panthers’ celebrations a few minutes later.

It was an absolute thriller.