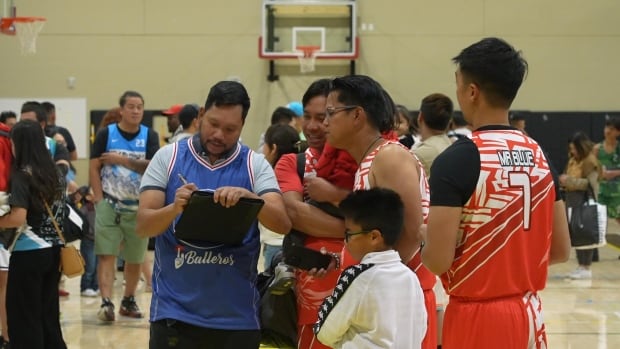 
The referee’s whistle calls a time out and players in the Grande Prairie Filipino Basketball League make their way to the sidelines.

As one team huddles, the coach has a stern look on his face while planning a path to victory.

He gives direction in Tagalog and the young players respond in the same language.

Tagalog, the language of the Tagalog people, is based on Filipino, one of two official languages of the Philippines. The other is English.

As the number of Filipino and Tagalog speakers in Alberta grows, the northwestern city’s Filipino basketball league is one environment where these languages are embraced.

Grande Prairie, 450 kilometres northwest of Edmonton, is part of the upward trend in usage of the languages across the province.

According to the federal census, Grande Prairie had more than 3,700 Tagalog or Filipino speakers in 2021, almost 1,300 more than five years earlier.

As language knowledge has grown, so too has the basketball league, which tipped off for another season on Oct. 15.

League president Placido Macarine says the games are part of connecting with the culture of the country where he was born.

“That’s what we play in the Philippines,” Macarine said.

It’s in my blood to play basketball.– Ervin Lanada

Macarine started playing the game in the Philippines when his family added a hoop to their yard.

“And then I grew up playing basketball in the street and pick-up tournaments,” he said.

He helped start the Grande Prairie league alongside Ervin Lanada.

The men were inspired to start the league following the death in 2012 of another Filipino immigrant, Kendel Tang, who had organized a drop-in basketball program in the city through a multicultural association.

“When I first came to Canada, for me anyway, it was kind of lonely and boring at the same time.” Lanada said. “I looked forward to going to every Friday and playing basketball and I do really owe it to Mr. Kendel Tang.”

The league started for all ages at an outdoor court in Muskoseepi Park over a decade ago. Lanada said the number of players doubled from the initial 10 to 20 and then 40.

This year the league has 14 teams competing in two age divisions.

“We added the 35 and above age division because myself and most of us were getting old,” said Lanada, who is 45.

‘A relief for us’

The league’s opening ceremony at Charles Spencer High School, where most of the games are scheduled this season, was an event for the entire family.

Joyce Baided loves basketball and was there in support of her husband. She said the event was an opportunity to embrace an aspect of her Filipino culture and pass it down to her children.

Player Alex Andalas said the league is also a nice break from work.

“I feel like it’s a relief for us. It’s time to have our family together,” Andalas said.

And the league is more than just a space to speak their language thousands of kilometres from the Philippines.

“It’s in my blood to play basketball,” Lanada said.

“And I just want other kids, or even older ones, when they come to Canada to experience that as well.”