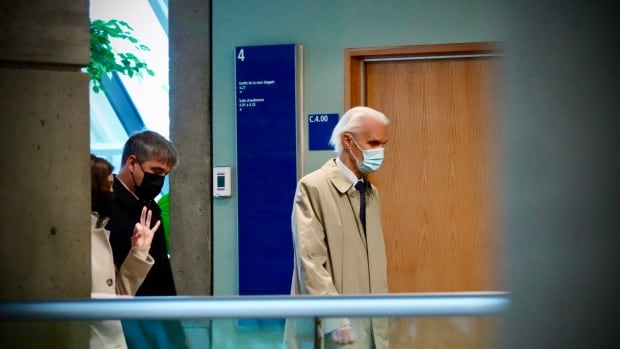 
Former Quebec Court of Appeal judge Jacques Delisle will not be facing a second trial.

The 86-year-old man, who was convicted in the 2009 death of his wife, is now free after Quebec Superior Court Justice Jean-François Émond granted a stay in the legal proceedings against him.

In his lengthy decision, Émond said he agreed with Delisle’s argument that a second trial would not be fair because the Crown’s experts made serious mistakes in the original pathology report that led to his conviction in 2012.

Delisle, who was released from prison in April 2021 to await a new trial, attended the ruling at the Quebec City courthouse with his son and his daughter. The group cheered and embraced upon hearing the ruling.

Former judge Jacques Delisle walks out of a Quebec City courthouse towards ‘peaceful days with his family’ after proceedings were dropped in his 2009 murder case. 0:59

“He just wants to move on and spend the rest of his days peacefully with his family,” Roy said. Delisle turns 87 next month.

Crown prosecutor François Godin said he and his colleagues would take some time to read the 99-page ruling before determining their next step.

While the Crown could decide to appeal, Roy said the ruling is irrefutable and provides little grounds for them to do so. “They don’t stand a chance,” he said.

A matter of a fair trial

In 2012, Delisle was convicted of first-degree murder in the 2009 death of his wife, 71-year-old Marie Nicole Rainville, and was sentenced to life in prison with no chance of parole for 25 years.

The retired judge always maintained his innocence, claiming that this wife of 49 years died by suicide.

In his decision, Émond wrote the 2012 conviction no longer stands because federal Justice Minister David Lametti found “a miscarriage of justice likely occurred” in the case.

Émond wrote that Canada’s justice system can sometimes err, even if that happens rarely.

He pointed to irregularities in the original autopsy report done by pathologist André Bourgault, which was used to incriminate Delisle.

Some evidence uncovered in a 2015 joint Fifth Estate-Radio-Canada investigation suggests there were bullet fragments in Rainville’s skull that were never recorded in the autopsy.

Bourgault also failed to photograph or preserve the brain slices he analyzed.

Émond said the pathologist had been “grossly negligent” for failing to disclose and preserve this evidence, which could have established without any doubt the trajectory of the bullet that entered Rainville’s brain.

That evidence was crucial to determine whether Rainville could have fired the firearm herself. Without it, Émond said, it would be difficult for Delisle to have a fair second trial.

In April 2021, following a six-year investigation, federal Justice Minister David Lametti ordered a retrial. Delisle was released on bail shortly after that decision. By then, he had spent nine years in prison.

At a hearing in November, Delisle’s lawyers argued that mistakes in some of the evidence led to their client’s conviction. They said those errors made by the Crown experts would make it difficult to ensure the fairness of a new trial. They also argued there have been unreasonable delays in the case.

Crown prosecutors argued that a new trial was necessary because of the seriousness of the charges.

This is not the first time Delisle has fought to have his conviction overturned. He appealed to the Supreme Court, which refused to hear his case in December 2013.