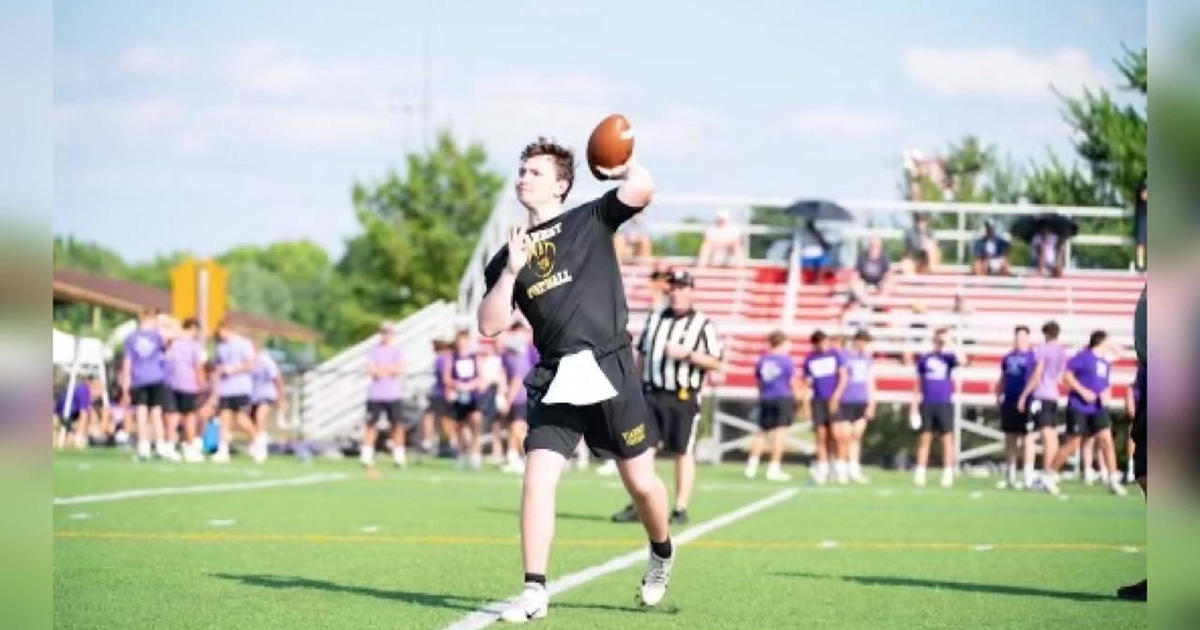 But as CBS2’s Christine Sloan reported Thursday, he has a lot of people rooting for him.

Aaron Van Trease is listed in stable condition at Robert Wood Johnson University Hospital. The 18-year-old senior got hit in the head during a routine defensive play and right now has no use of his lower body. His parents are by his side and remaining strong. They spoke to CBS2 earlier Thursday.

“Aaron is doing very well. Each day he has taken little steps forward, you know, to get himself to rehab and to regain strength his legs,” Debra Van Trease said.

His parents are hopeful.

Aaron has received a big boost from the NFL. Former players and current broadcasters Tiki Barber and Greg Olson were among those to reach out on social media to wish him well.

“You’re going to be on your feet in no time,” Barber said.

“On behalf of myself and the entire Gronkowski family, we are hoping praying for you and your family and wishing you a speedy recovery,” former NFL tight end Rob Gronkowski said.

Aaron’s dad said his son’s eyes lit up when he saw the video.

“He was elated,” Rich Van Trease said. “It really, really made his day. It was wonderful for those guys to take the time to do that for my son.”

Support is coming from their community of Manasquan, as well, for Aaron, who is not only a superb athlete but also a National Honor Society member. Coaches have been wearing t-shirts with his initials and friends have so far raised $140,000 for his care.

“The outpouring of support from all over has been overwhelming,” Debra Van Trease said. “He has been such a pleasure to raise over these 18 years and, you know, it breaks our heart to see him like this right now, but he will … he will come through.”

Former Rutgers football play Eric LeGrande, who was paralyzed after suffering an injury, has also reached out. Aaron’s parents said his words give them hope.

The CBS New York team is a group of experienced journalists who bring you the content on CBSNewYork.com.

Supercontinent Amasia may form in about 300 million years