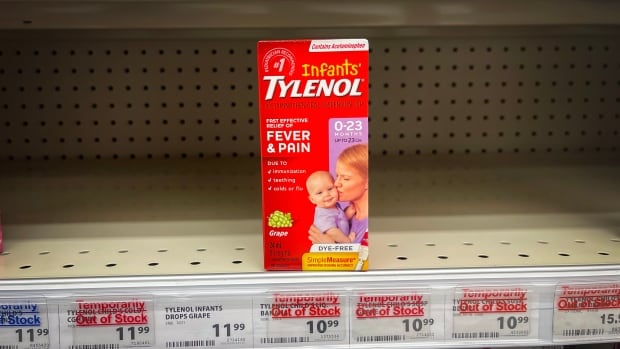 
Toronto’s SickKids Hospital is advising parents of changes to access to some over-the-counter fever and pain medicine for children, due to a nationwide supply shortage of Advil and Tylenol.

In a letter sent to parents and caregivers on Monday, SickKids warned parents that they will now require a prescription to get the liquid form of Tylenol or Advil from a pharmacy. It cannot be sold over the counter because it has to be repackaged from large bottles into smaller bottles by the pharmacist, SickKids said.

“Pharmacies across Canada are dealing with supply shortages of liquid forms of common fever and pain medicines, acetaminophen and ibuprofen,” the letter reads.

The hospital said the information provided to parents “will help manage the situation until supplies return to normal levels.”

Here are some solutions the hospital is suggesting

SickKids assured parents if a child is staying overnight at its hospital they will receive the medication they require for pain or fever.

However, if a child visits the hospital and requires a liquid form of pain or fever medication when they go home, parents are required to ask their health-care provider for a prescription in order to get it from a pharmacy.

The hospital says parents should consider purchasing other forms of acetaminophen or ibuprofen for their child. Those options include:

The hospital is recommendinng parents discuss proper dosing with a pharmacist or health-care provider if using one of these methods.

Kyro Maseh, owner of Lawlor Pharmacy, said his pharmacy has been experiencing a shortage of liquid Tylenol for several months.

“It’s not the first time … Tylenol liquid has disappeared, the only one available is the prescription form,” Maseh told CBC Radio’s Metro Morning on Tuesday.

Metro Morning7:20Shortages of over-the-counter pain and cold medicine have parents and pharmacists concerned

Kyro Maseh is with Lawlor Pharmacy, an independent pharmacy on Kingston Road in Toronto.

Maseh said while his pharmacy still has liquid supply of Advil, the lack of Tylenol supply has made it more difficult for clients.

“It’s definitely very frustrating for a lot of parents. From our end we try to mitigate it as much as possible,” he said.

“It’s already hard enough getting a medication for a child — I know that first hand. For you to not even find that medication, it becomes even more difficult.”

Vote to unionize Scottsboro Starbucks is coming up