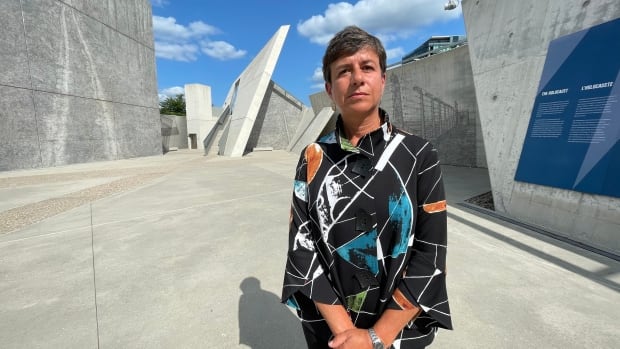 National Holocaust Monument ‘desecrated’ by use as photo and video backdrop


Members of the Jewish community say more needs to be done to educate the public about the Holocaust as a national memorial continues to be used as a backdrop in photo shoots, fashion campaigns and music videos.

The National Holocaust Monument in Ottawa, inaugurated in 2017, is located in the city’s downtown on the corner of Wellington and Booth streets.

The monument is meant to ensure “the lessons of the Holocaust, as well as the remarkable contribution Holocaust survivors have made to Canada, remain within the national consciousness for generations to come,” according to the National Capital Commission’s website, which is responsible for maintaining it.

The Holocaust is one of the worst genocides in human history, with more than six million Jews murdered during the Second World War.

The monument’s design features tall, sombre, concrete slabs with several murals inside depicting scenes of the Holocaust. There are also signs inside with facts about what happened. Large signs on either side of the site’s entrances read “National Holocaust Monument.”

Despite this, numerous people have flocked to the site to use it as a backdrop for photos and videos that have nothing to do with honouring victims and survivors. Several people have tagged themselves on Instagram, posing at the monument.

Local clothing company V Kentay recently faced criticism both on and offline for doing just that.

A video it posted to its social media platforms and website last year — which has been getting attention recently — features a model wearing pieces of a new swimsuit collection, posing around the monument. At least two other videos from the company had been filmed there.

“To know that this place has been desecrated, that their memory has been desecrated, and that a place of sombre reflection and education was used in a fashion shoot, not for the first time, is incredibly frustrating and disheartening,” said Andrea Freedman, president and CEO of the Jewish Federation of Ottawa.

While the space itself is public with no official rules in place about photography and videography, Freedman said people should understand its intended use.

She welcomes people to take pictures for themselves and to even post photos or selfies with the monument online. However, that should always be done respectfully with the intention of educating people about the Holocaust.

“It has come to our attention that V Kentay has offended the Jewish and Ottawa community,” wrote Genus in an email statement.

“From a creative perspective, the artistry of the memorial seemed to be a perfect fit for what my team and I were looking for aesthetically for that particular campaign,” she wrote.

“I erred to consider any political or emotional implications this decision could have caused. I offer my deepest apologies and regret making this decision. I made an honest and immature mistake as a new business owner.”

The videos have since been removed from the company’s website and social media platforms.

However, other members of the Jewish community said it serves as a good reminder about the need for education about the Holocaust.

Since the monument was unveiled five years ago, Mina Cohn, chair of the Centre for Holocaust Education and Scholarship (CHES), said she’s seen a number of photographers and videographers at the site, shooting Instagram ads, fashion campaigns and music videos.

“It’s very upsetting that it’s reoccurring and it’s not the first time that it’s happened,” she said.

Judy Young, another member of CHES and a Holocaust survivor herself, said she’s not interested in seeing those people punished but that more needs to be done to inform the public.

“I think there ought to be more information, not just on the monument itself, but information out about what the significance of this place is,” she said, whether that be the NCC, the federal Department of Heritage, or the CHES as a community organization.