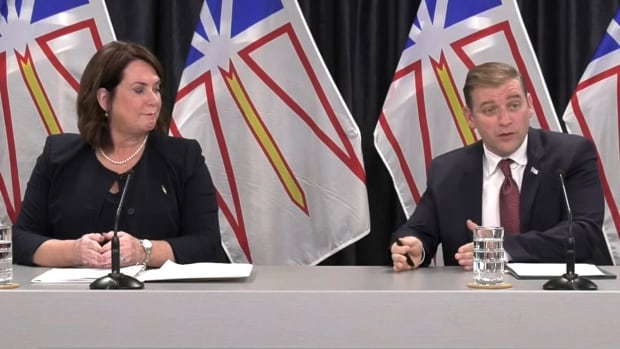 N.L. government writing cheques of up to $500 for cost-of-living relief


Most Newfoundlanders and Labradorians can expect a $500 cheque this fall, following the provincial government’s announcement Wednesday morning of a one-time cost-of-living payment.

“This is our effort to help right now, when people need it the most,” said Premier Andrew Furey during a news conference at Confederation Building in St. John’s.

There will be no applications necessary to receive the cheques. People who haven’t filed their 2021 tax returns will receive a cheque if they file before the end of the year.

Rather than offering some form of tax rebates, Furey said, his government wanted to leave the spending to people’s discretion.

“The cost of living is a current and real emergency for many people in our province,” he said.

“We know the needs of every household in our province are different, and this cost-of-living cheque gives everyone the flexibility to put some money where they need it most, whether that’s groceries or rent, home heating or gas.”

Finance Minister Siobhan Coady says cheques can go out as soon as the plan passes the House of Assembly, and expects money should be people’s pockets by Christmas.

The government estimates the payments will cost the province about $194 million.

In April the provincial government projected a budget deficit of $351 million, but Coady said the payments have been made possible by higher than expected revenues largely due to the price of oil being higher that projected in the budget.

The announcement was welcomed by people who spoke to CBC News in downtown St. John’s.

“As a recent graduate and trying to break into the workforce and all that kind of stuff, it’s incredibly difficult,” said Hillary Winter.

“Trying to buy a house is, like, essentially out of the question,” she said. “Even groceries cost so much.… Everything feels like it’s way more than it was even five years ago, and it’s becoming a huge barrier.”

Taylor Baker-Tucker said the payment will be a nice boost to help with her rising rent.

“I live downtown, so obviously rent is a little bit higher in downtown,” she said. “It’s awesome to have a little bit of extra money to go toward it.”

Progressive Conservative finance critic Tony Wakeham commended the province for the move and said it’s something the opposition has been calling for for over a year.

But it should have come sooner, he said, and he has questions about the future of other temporary solutions, like the recent 10 per cent increase to the provincial income supplement.

“I think there’s still lots of things that need to be addressed,” he said. “$500 per person will not solve all the problems.… It’s a step, but it’s only one step.”

Wakeham also questioned the timing of the announcement, coming on the first day of the fall session of the provincial legislature.

Jim Dinn, the interim leader of the provincial New Democrats, called the announcement “another one-off.” He said he wants to see more from the provincial government to address the cost of living for the long term.

“This amount might, might, cover some the amount of rent increase that some people are facing. They still got to put food on the table, buy necessities, pay heat and light,” he said.

“It’s got to be forward-thinking, proactive and long term.”