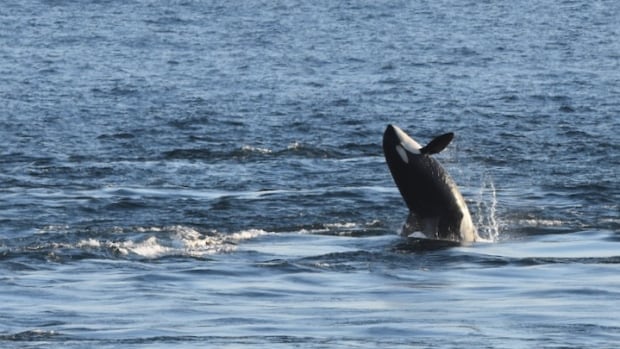 
A growing mystery around some of B.C.’s most endangered killer whales may have been solved, but experts say changes in the animals’ behaviour still have them concerned.

The southern resident orca group known as J pod is usually seen in the waters between the southern tip of Vancouver Island and the United States on a near-daily basis between April and September.

But for 108 days there were no sightings of the endangered pod, until Monika Wieland-Shields, founder of the Orca Behaviour Institute in Washington State, captured them on video July 27 in Haro Strait.

“It was pretty remarkable to not have them here for so long, especially in what was considered to be the peak season to see them,” she said.

Southern resident killer whales, of which just 74 animals remain in three pods, have been closely studied since 1975.

Unlike the transient orcas that feed on mammals, the southern residents eat fish. Chinook is their preferred species.

This makes them especially sensitive to any decline in salmon stocks along the South Coast of B.C. — especially in a summer when heat and drought have made this year’s salmon run anything but predictable.

Only 12 hours after J pod was spotted, they vanished once more.

“They’ve gone back to we don’t know where,” said Andrew Trites, director of the University of B.C.’s marine mammal research unit.

Trites said the change in behaviour may be because of new leadership in J pod, after the 2016 death of the former matriarch nicknamed Granny.

Within each pod, families form into sub-pods centred around older females, usually grandmothers or great-grandmothers. Both male and female offspring remain in close association with their mothers for life, according to the Centre for Whale Research.

“She led the other killer whales here, but with her death, the daughters then take over. They appear to have chosen something different. We don’t know exactly what that is, except they’re not sticking to the old plan,” Trites said.

Whale researchers up and down the coast are seeing unusual events this summer.

Lance Barrett-Lennard, director of the marine mammal research program at Oceanwise says although there’s concern about J pod, the transient killer whales, which hunt seals and sea lions rather than salmon, are doing very well.

He also said sightings of extremely rare sei whales and right whales in B.C. waters could be a good sign.

“These are two species that were completely absent from our coast for generations of human time, so it’s definitely encouraging we’re seeing them again,” Barrett-Lennard said.

He and other researchers are anxious to study images taken by drone of the wandering J pod whales and see whether they are getting enough of the salmon they depend on.

Countries pressing ahead with booster shot plans despite WHO plea