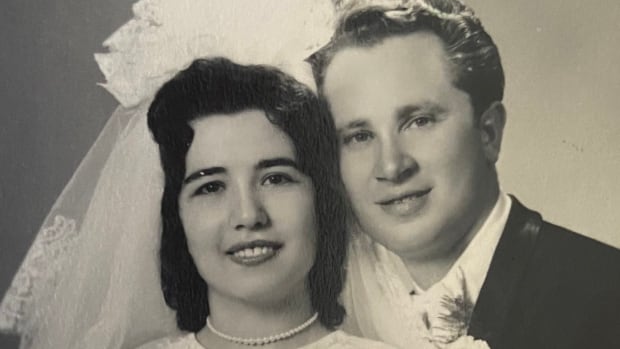 
This First Person article is the experience of Rita Simonetta who was born and raised in Toronto by Italian immigrant parents. For more information about CBC’s First Person stories, please see the FAQ.

Eight months after my father died, I saw a bundle of letters sitting atop my mother’s coffee table. They were tied with a silk, pink ribbon thanks to my mother’s flair for embellishment. And they were addressed to her in my father’s neat, methodical script.

My mother had mentioned in passing a few times that my father had written letters to her decades ago. She referred to them as the “love letters written when he was young” — as if it were the name of a newly discovered planet.

I couldn’t imagine my no-nonsense father ever writing anything akin to love letters. I also felt uncomfortable invading his privacy now that he was no longer around to shield it. But my 82-year-old mother, now a widow, knew how to get her way.

“Would you like me to read them to you?” she asked with a hint of a smile.

The letters were written in 1967 over the course of a month when my father travelled to Italy to care for his beloved, ailing mother. He left his wife and his firstborn child behind in Toronto — the city my parents called home after immigrating to Canada from Italy in 1956.

Growing up, my father was my hero and protector, but he was also a man of few words. Part of a generation of immigrant men who sacrificed and worked hard for a better life. His thick, callused hands seemed to have formed from cement — the result of decades-long work involving sawing, cutting, measuring, and laying flooring as a carpenter and construction worker.

So as I sat back while my mother read his letters to me, I thought, “Who is this guy?” My father used endearing terms I had never heard him utter. He referred to my mother as “my dearest,” and “my companion” who, along with his caro piccolo (sweet little boy), were always in his thoughts. In each letter he enclosed a Canadian one-dollar bill for his son and declared, “You and your mother are my life.” He continually expressed how much he missed his family and asserted to his wife, “Now that I am away from you, I know and understand what you and my son mean to me.”

I was born in 1974, almost a decade after these letters were written. As children we assume we know everything about our parents. Sometimes we don’t see them as anything but as parents. But, sometimes, we find out that they were and are people with various facets — as well as a past we were not privy to.

When he penned the letters, my father was in his early 30s and full of hope for the future. Long before regrets and old age took their toll. Long before the optimism of romance clashed with the ensuing years and two wilful personalities.

My father was proud and stubborn, and he married a woman who was his equal in that regard. During their 58-year marriage, their dynamic often led to conflict. They fought over repeated grievances; other times over mere trivialities. It was not uncommon for them to spend an entire year without speaking a single word to one another.

So it was bittersweet to hear my father’s youthful sentiments read aloud by my elderly mother with a wistful tone. I knew she was thinking about what could have been — and what had been once upon a time.

After she finished reading the letters, I held them in my hands and examined them like they were fossils. I was positively impressed that although the papers were unlined, my father wrote in straight lines. For a man who I knew as economical with his thoughts, he had filled the front and back of several pages.

These letters are only part of their correspondence: my mother wrote back to my father. One day she will read those letters to me, she’s assured me. And just as with my father, they might help me discover another dimension of a parent I never knew before.

Do you have a compelling personal story that can bring understanding or help others? We want to hear from you. Here’s more info on how to pitch to us.