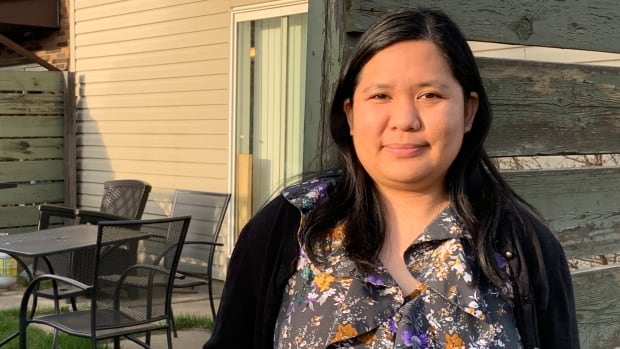 Moving targets: Every change of address is a sign of my changing goals


This First Person article is from Giselle General, a Filipina Canadian who married a born-and-raised Edmontonian and lives with him in their fully paid off home.  Her story is part of The Henday Project, a CBC Edmonton initiative focused on the suburbs. For more information about CBC’s First Person stories, please see the FAQ.

“$1,000 of our monthly mortgage payments goes toward interest?!” I cursed in English, Tagalog and Ilocano as my husband and I reviewed our mortgage statement.

I’ve been told that people move to a new home at least five times in their life as their goals change. Turns out, it’s true.

I immigrated from the Philippines and came to Edmonton in 2008 when I was 17. I first lived in The Hamptons, a neighbourhood on Edmonton’s far west edge. It was a six-bedroom, split-level house where I had my own bedroom; there was another for my brother when he immigrated a few years later.

At first there were six of us, then there were 10 — aunts, uncles, cousins, all sharing the rent, the parking spaces and the common expenses. It helped all of us get settled in this new city.

But transit service was minimal, and it took a long time to get around. Even taxi drivers were perplexed when asked to take us to this unfamiliar territory. “There are street numbers above 200?”

“Yup! Just head west. Once you go beyond the Henday, I’ll tell you the rest.”

My then-boyfriend, a born-and-raised Edmontonian from the west side, bought his first place after we started dating: a two-bedroom condo in Lewis Estates. In 2013, it became the second place I lived in Edmonton when I moved there with my teenage brother in tow.

In 2015, we had new goals in mind. My boyfriend was thinking that a bigger house with lots of roommates would help us save for retirement more quickly. For me, I wanted a quicker commute to my downtown job.

He nudged me to consider Rio Terrace, the mature neighbourhood along Edmonton’s river valley where he grew up. My research involved a transit map, where I traced the frequent bus routes and highlighted areas nearby.

Our next home, a 1969 bi-level, had space for two to three roommates, including my brother. It was a lovely home, much more spacious than the condo and the roommates were covering half of our mortgage. It was walkable to many places and I felt connected to the neighbourhood by volunteering for the community league.

Stress, a pandemic and transit upheaval

Then, the pandemic happened. My husband was burning out at his job which was high-paying but also high-stress. In April 2021, the bus routes were changed. In the fall, I lost in my candidacy for city councillor.  It was time again to re-evaluate our future, including our careers, retirement and housing.

We realized if we pooled some savings and sold this house, we could buy a smaller home in cash. This time, I used Google Maps to check for houses with good bus routes on the west end.

We found a 1970s three-bedroom townhouse in West Meadowlark Park that met our needs.  “You’re chasing the #4 bus!” laughed my friend when I told her the address.

As moving day approached, we eagerly reminded ourselves that we’ll be truly debt-free. We’d found our Goldilocks moment — a home that is just right and that will help us have a life that aligns with our values.

We are both simple and minimalistic, organized and frugal and desire financial independence. We just changed the definition of it. Instead of retiring early, we’ll have no debt, which means flexibility to take risks and have a relaxed life now.

We have more space to ourselves compared to our previous homes — even separate offices. My husband is thrilled to not have a large yard to maintain; I was thrilled to see our sidewalks cleaned off a few hours after a snowfall.

We’ve walked to West Edmonton Mall, the Italian Centre and T & T to get cooking staples. There are numerous neighbourhood business plazas and community centres easily reachable by foot or by bus.

According to our budgeting software, being mortgage-free cuts our living costs by 50 per cent.

My husband still asks me, “Is this downsizing a downgrade for you?”

“Heck no! It’s just right for us. Besides, home is wherever I’m with you.”

Do you have a compelling personal story that can bring understanding or help others? We want to hear from you. Here’s more info on how to pitch to us.

The ABCs of finance: How this Ontario teacher is preparing her students for the real…