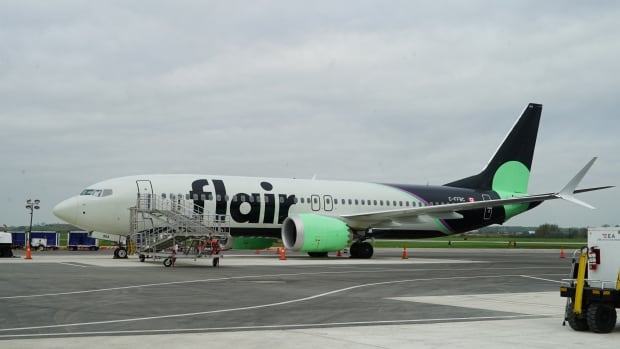 
RCMP say they are investigating after a passenger on a Flair Airlines flight bound for Vancouver Friday night reported a “possible threat.”

Richmond RCMP — the detachment with jurisdiction over Vancouver International Airport (YVR) — said in a statement Saturday that a passenger on Flight 2799 from Edmonton received a threatening message on their phone and immediately informed authorities.

A YVR spokesperson said in a statement that the plane, which arrived at 11:44 p.m. PST on Friday, remained on the taxiway until 1 a.m. Saturday while Mounties investigated. Police then cleared the plane to proceed to its gate. Passengers were not allowed to leave the plane until 2:15 a.m.

CBC News has reached out to Richmond RCMP to find out the exact nature of the threat. No one has been arrested in the incident, but RCMP spokesperson Cpl. Dennis Hwang says their investigation is “active and ongoing.”

“At the request of the Flair Airlines crew, members of the RCMP boarded [the] Flair Airlines flight,” a Flair spokesperson said in an email. “The passengers and crew deplaned following a brief investigation of suspicious activity in flight by a passenger.”

Under the Criminal Code, anyone caught uttering threats could be sentenced to jail time. Mounties say other sections of the code may also apply in this case.

“The safety of the flight crew, passengers, and the public will always be of paramount concern for us,” said Hwang in a statement.