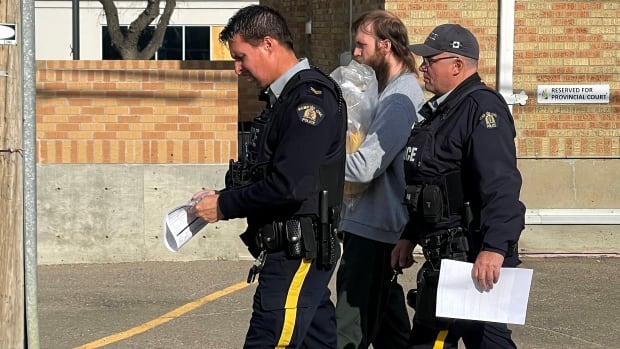 
A Saskatchewan Mountie was recently spotted wearing a symbol that has been associated with white nationalist movements while escorting an inmate who had just been sentenced for hate speech.

The officer displayed a “thin blue line” patch on the left site of his hat Thursday as he transferred Travis Patron back to jail from Court of King’s Bench in Estevan.

Patron, who formed the Canadian Nationalist Party in 2019 and led it in the federal election, was sentenced to one year in jail for hate speech against Jews. His far-right party was deregistered by Elections Canada this year, but it had previously pushed for a white ethnonational state dominated by Canadians of European descent.

The symbol of a horizontal blue bar across a monochrome Canadian flag has been co-opted by some white nationalist movements, while others see it as a way for police to honour fallen officers.

The RCMP banned it from uniforms in 2020.

“The ‘thin blue line’ is not a symbol the RCMP can endorse for official use and can be hurtful to segments of our community, conveying an ‘us versus them’ mentality,”‘ the Saskatchewan RCMP said in a statement.

Citing privacy concerns, the RCMP wouldn’t disclose the identity of the officer who wore the patch after The Canadian Press provided photos of him leaving the courthouse with it on his hat. RCMP also declined to provide a statement on his behalf.

“The photos bring forth a good opportunity for senior management, including the Saskatchewan RCMP sergeant major, to re-educate individuals on the RCMP’s uniform and dress manual and the implications the ‘thin blue line’ may have to segments of the communities we serve,” the RCMP said.

This is the second time this month the national police agency has reminded its officers not to wear the symbol.

Nova Scotia RCMP emailed staff earlier this month saying the patch was prohibited. It came after pictures surfaced online showing a member with the patch on the front of his uniform at a Freedom Fighters rally in Nictaux, N.S.

“The symbol is purposely ambiguous,” said Barbara Perry, director of the Centre for Hate, Bias and Extremism at Ontario Tech University.

“It has been sort of owned and claimed by white supremacists to reflect their views and the solidarity police have in those views. But more broadly, I think most officers don’t actually see that,” Perry said.

Many officers in Canada would be saddened to learn other groups have misappropriated the “thin blue line” flag, said the Saskatoon Board of Police Commissioners in a report it released in May before it banned its officers from wearing it.

“It can represent a society that is quite dystopian, and for some people, it can be divisive between the police and the communities we serve,” said the report.

The symbols have also been ordered off officers’ uniforms in Edmonton, Victoria, Ottawa, Toronto and Saint John.

In the United States, the symbol has been spotted at Black Lives Matter rallies and was on flags during the insurrection of the U.S. Capitol on Jan. 6, 2021.

Some police services have called the symbol racist.

“It is clear that the history and controversy surrounding this symbol, specifically its racist and extremist origins, is not in line with the protective and community-based services officers in Charlottetown aim to deliver,” the city’s police service said in a statement in July after one of its officers wore the symbol at a Pride event.

Perry said it’s difficult to know what the Saskatchewan officer was trying to communicate by wearing the symbol.

“Nonetheless, it’s still that representation of ‘us versus them.’ It’s distancing themselves from the people they’re meant to be serving and that in itself is problematic.”