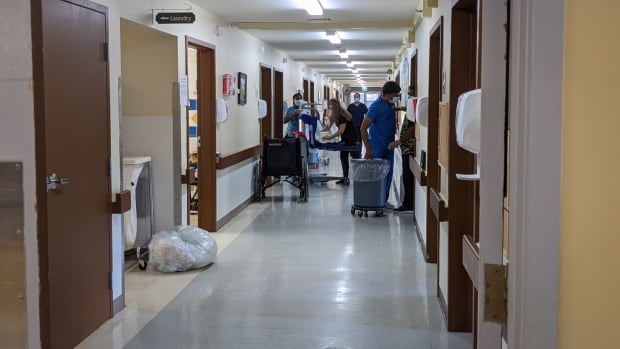 More than 1 in 5 residents in long-term care given antipsychotics without a diagnosis, data shows


When Laura Pinto moved her father to a Windsor, Ont., nursing home in 2017, she says he deteriorated from someone who had dementia and memory issues into a “zombie.”

The change was the result of a cocktail of drugs, according to Pinto, that included Haldol and Seroquel — antipsychotic medications traditionally prescribed to control symptoms like hallucinations or delusions, and the behaviours that result from them.

Her father received the medication off-label — for issues not specifically recommended by Health Canada — for more than six months. He is described as engaging in “prevalent exit-seeking behaviour” — wandering around trying to find a way out of the home — in a medical report supplied to CBC News by Pinto. However, he’d never been diagnosed with psychosis, meaning a doctor had never determined he had schizophrenia or any of the psychiatric conditions that highly sedative antipsychotics are meant to treat.

Robert Pinto was just one of tens of thousands of residents in Canadian long-term care homes without a psychosis diagnosis that have been prescribed antipsychotics — a number that has been increasing since the pandemic began, according to data from Canadian Institute for Health Information (CIHI).

The medication is intended to sedate, and is used off-label to combat a variety of behaviours, from wandering to insomnia.

“Antipsychotics have been referred to as chemical restraints,” said Tamara Daly, the director of York University’s Centre for Aging Research and Education.

Those numbers had previously been steadily decreasing. In 2019-2020, just over 20 per cent of long-term care residents were receiving antipsychotics off-label, the result of increased awareness around the issue, which had many homes using the medications more judiciously.

But the numbers have since been on an upward trajectory. In 2020-21, 22 per cent of residents were receiving antipsychotic medications while having no clinical indication of their necessity, according to CIHI. Preliminary statistics for 2021-22 show that this trend has continued, reaching 23.9 per cent.

“When we see an excessive amount of prescribing for antipsychotics, where there’s no clinical reason or disease state to be prescribing it, that would be a flag,” she said. “It’s often an indicator that people in the home are being managed chemically.”

The COVID-19 pandemic created a litany of issues for long-term care. Among them, questions about how to properly quarantine and manage individuals who don’t or can’t comprehend the impact that their behaviours can have on the spread of infection, or strain they cause on an already resource-strapped system.

Ninety per cent of those living in long-term care facilities deal with some sort of cognitive impairment, according to Dr. Samir Sinha, director of geriatrics at Sinai Health in Toronto.

These residents have significant difficulties or are completely unable to advocate for themselves, Sinha said.

“This data can be quite powerful in giving them a voice,” he said.

CIHI has been publishing data on the “potentially inappropriate” use of antipsychotics in long-term care since 2015. The data for 2021-22 was provided to CBC News ahead of schedule, according to CIHI, with the understanding that fewer homes reported due to COVID-19 difficulties, and that fulsome data-quality checks have not been completed.

Their last official release, showing statistics for 2020-21, includes more than 1,300 homes spanning eight provinces and one territory. Submitting statistics to CIHI is voluntary, and not every home participates, but the data includes a strong majority of facilities in the nation. Absent are statistics for P.E.I., Quebec, Nova Scotia, the Northwest Territories and Nunavut.

Many of these jurisdictions do, however, track antipsychotic use in some way.

Quebec, for instance, reports that 40 to 60 per cent of long-term care residents over the age of 65 take antipsychotics without having been diagnosed with psychosis, or received additional doses for a reason unrelated to their diagnosis.

CIHI also includes the caveat that their data captures “potentially inappropriate” instances, as some experts say there can be situations where it is warranted to give antipsychotics off-label.

“There is obviously debate at the margins about what is the appropriate use of antipsychotics,” said Isobel Mackenzie, who leads the Office of the Seniors Advocate in British Columbia. “It will depend on the health-care practitioner you speak to, and the individual situation.”

While there are questions about when and where these medications are appropriate, there is little disagreement that the current levels of use are higher than they should be.

“When we’re funding these environments to provide a certain level of care,” said Sinha. “We should expect that they should be providing that level of care first, rather than taking the easy route that might actually potentially cause more harm than good.”

Some provinces have fared worse than others in their attempts to lower the off-label prescribing of antipsychotics and, in some cases, telegraphed their issues long before COVID-19 exacerbated chronic issues present in the long-term care sector.

Facilities in Saskatchewan and Alberta, for instance, have both been steadily increasing their rates of use since 2017-18.

Alberta, which has for years had the lowest average use rate in Canada, gained nearly three percentage points between 2018-19 and 2020-21. For the last two reported years, it was in lockstep with Ontario, a province it previously was comfortably below.

While no data is available for Saskatchewan’s 2019-20 year, it, too, ended 2020-21 three percentage points higher than it had been just three years prior.

British Columbia has for years far exceeded the national average for long-term care and finished 2020-21 at 26 per cent. Of the 275 clinics in B.C. for which CIHI has data, 90 of them were providing antipsychotics without proper diagnosis to 30 per cent or more of their patients. Nearly 20 in that group were at a rate over 40 per cent, with the two highest above 60 per cent.

“When we chose to focus on this, we drove the numbers down,” Mackenzie said. “But our focus — our singular focus on that — shifted.”

“I don’t think anybody means to cause harm’

There is a long list of behaviours for which a long-term care resident could be prescribed an antipsychotic medication off-label, including for wandering, shouting, hoarding or even difficulty sleeping, according to Healthcare Excellence Canada (HEC), a non-profit primarily funded by Health Canada.

However, HEC, which spearheaded initiatives aimed at reducing antipsychotic use in a number of provinces, holds that sedation only masks the issue.

“The symptoms may appear to respond if the [antipsychotic] sedates the patient, but will return when tolerance to the sedation is reached,” reads a handout they developed for educating medical professionals.

“I don’t think anybody means to cause harm,” Sinha said, speaking about medical professionals who find themselves considering prescribing antipsychotics off-label.

“But we have to appreciate that if this was your parent, is this actually what you would be doing, especially when this solution could cause harm?”

The extra time and effort it can take to manage an individual in long-term care with difficult behaviours highlights an issue for the sector that has been growing for decades: changing demographics. The number of people in Canada over age 85 has doubled since 2001, according to Statistics Canada, and older people often have more complex medical needs.

Twenty years ago, staff would be dealing with residents who had some frailties and needed a small amount of assistance, Daly said. “Now, the needs are so great for every single person and we haven’t adjusted our staffing to reflect those complexities.”

One general manager of a long-term care facility in New Brunswick told CBC News that when his facility opened 36 years ago, “residents [were] coming to the nursing home with a car. And, you know, now they arrive in [an] ambulance.”

WATCH | Why are seniors being over-prescribed?

Seniors being over prescribed

Health-care workers, patient groups and governments are striving to cut inappropriate prescriptions for seniors by 50 per cent by 2020

In the fall of 2020, the Liberal government pledged to work with provinces and territories to create national standards of care for long-term care and to provide extra supports.

In a statement to CBC News, Health Canada highlighted a $1-billion transfer the federal government made to provinces and territories at that time to “protect people living and working in long-term care.” They also pointed to an additional $3 billion, slated to be made available over the next five years, meant “to ensure standards for long-term care are applied and permanent changes are made.”

But the section of the 2021 budget that provides details about the proposed funding makes no mention of antipsychotics or over-prescribing.

Shortly before he died in 2019, Robert Pinto, who lived in a long-term care facility in Windsor, was sent to hospital with a respiratory infection. Once his antipsychotic medication was cut back there, “he was very different,” said his daughter, Laura.

He still had dementia, but his appetite returned, as did his ability to recall certain memories and to enjoy poetry.

“He was able to sing songs from his youth, that sort of thing,” she said. “All of that had disappeared when he was heavily sedated.

“You didn’t see that quality of life.”