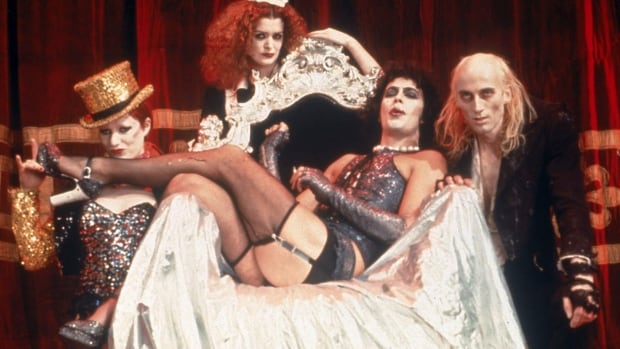 
It’s a staple of Montreal’s Halloween celebrations but this year, the city’s beloved Rocky Horror Picture Show Ball is cancelled — and it’s not due to COVID-19.

The show won’t go on, over what’s being described as the exploitation of “the free labour of LGBTQ2S+ folks,” after many cast members learned the longtime producer of the show had been earning money from the event, while the actors volunteered their time.

“We believed the show to be something that it was not,” said Zev Miller, a cast member for a decade.

A cast meeting held September 2021 brought forward other concerns and ultimately led to the 2022 show being cancelled.

Now some former cast members are calling for a boycott of further Ball events under the current management.

A cult classic with a twist

It bombed at the box office in 1975 but has since reached cult classic status: The Rocky Horror Picture Show is a musical romp.

Add a cast performing in front of the screen and the crowd dressed up in costumes, yelling and throwing toast and you have the Rocky Horror Picture Show Ball (not to be confused with the theatre production put on by MainLine Theatre.)

Montreal’s yearly event draws large crowds over several nights around Halloween and has been described as one of the largest balls in North America.

But after decades of performances, things came to a head last year, when cast members became aware that Philippe Spurrell, the longtime producer of the show, was making money off the show.

Spurrell, who has been the producer since 1998, refused to give an interview but sent a statement which did not address the salary question.

However, in an email sent to the cast last year, obtained by CBC, Spurrell defended himself, saying he never hid that he “earned part of my living from the event,” noting that he assumed that information was shared internally throughout the years.

He would not disclose just how much profit he made from the show.

“Let me assure you that, after making the calculation of my time and financial reward, my ‘hourly wage’ is equivalent to what the average construction worker earns hourly,” he wrote to the cast.

In his statement to CBC, Spurrell said this year’s cancellation was due to a number of reasons, including “discord between certain shadow cast members and the shadow cast wanting a more democratic management structure with less hierarchy.”

For Miller, who joined the show a decade ago, that was unacceptable. As a non-binary trans person — who uses the pronoun they — Miller said Rocky provided an important place for them and they were led to believe the show did not make a profit.

“Rocky being this queer platform or this place for queer exploration, as a 17-year-old queer kid, was a really appealing place to be,” Miller said.

“That he could make a salary to me is beyond unbelievable. It’s incredibly exploitative.”

WATCH | Go behind the scenes at a Rocky Horror Picture Show rehearsal:

“Most of the cast had been under the impression that this was a community theatre group that barely broke even,” Dragonas said.

“This was particularly insulting because we rehearsed and performed for free, took days off work to participate, paid for our own costumes, were forced to beg for tips for our cast party, weren’t insured or compensated for injuries and were constantly told that things couldn’t be reimbursed by the show because the budget was super tight.”

The most recent director of the show, Erin Fagen, concedes there were problems with both the organization of the event and the transparency surrounding it.

“I think that there were always some major cracks in the foundation of what our show was built upon,” she said.

“We kept putting Band-Aids on those cracks to put on a production.”

Last year, the decision was made not to put on a 2022 show and to work toward fixing those cracks.

Spurrell wrote to the cast announcing he would be leaving the production after helping to continue to secure the rights of broadcasting the movie.

Many cast members said it was a step in the right direction.

In the end though, Spurrell will remain.

“I actually believe that Phil is going to move forward with us,” Fagen said, noting it was a question of continuing to obtain the rights to play the movies.

She hopes the event can be back next year, under a more transparent and clear direction.

That’s not good enough for some who were previously in the cast.

“That show will continue to gain profit into the pockets of this man who has deceitfully exploited queer, trans and performers of colour for over a decade,” Miller said.