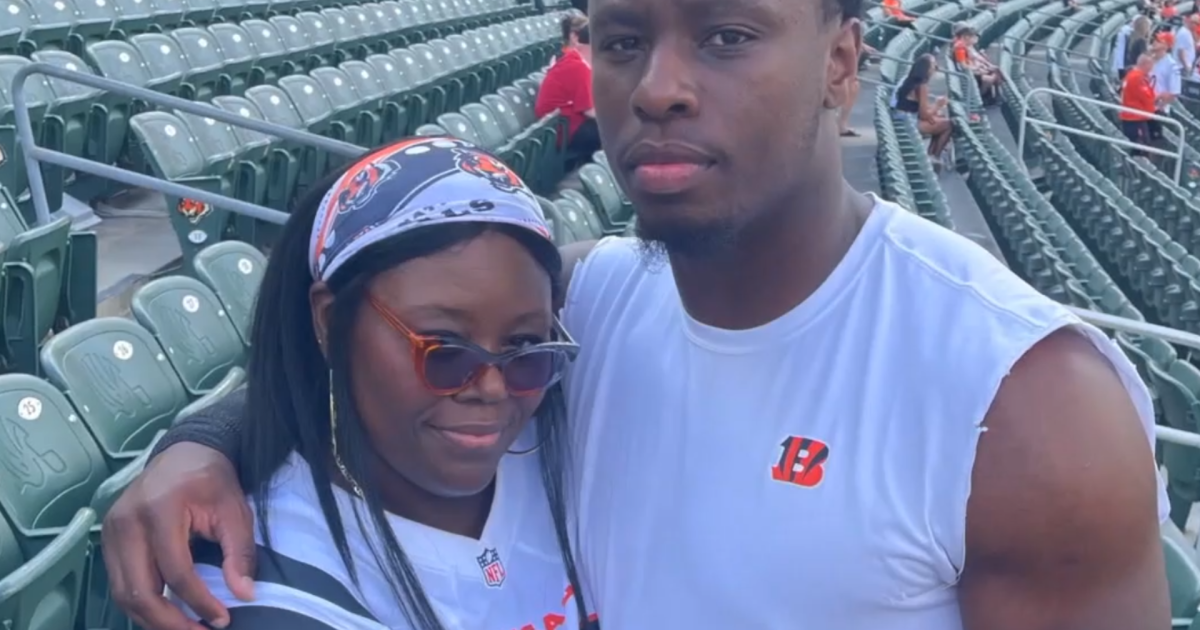 
CINCINNATI — Most moms gush about their kids. Jennifer Gunter, mother to Bengals rookie defensive end Jeff Gunter, is no different.

“He was the best kid,” Gunter said. “He graduated high school with a 4.5 GPA and from the time he was 5 years old, he knew he wanted to go to the NFL.”

How her son talks about his mother is a little more exceptional.

“I don’t think I would be here without her,” Jeff Gunter said. “She pushed me when I didn’t think I could do it myself. She was always fighting to keep on and keep grinding.”

Jeff wasn’t a big kid, but he had a big dream of making it to the NFL. Gunter did whatever she could to help him get there — including keeping the fact that she was suffering from cancer from him.

In February of this year, Gunter was diagnosed with Large B Cell Lymphoma.

“I had three blood clots in my lungs,” Gunter said. “And they found that I had a mass that went from the top of my sternum to the bottom of my diaphragm.”

She endured six rounds of chemotherapy and 17 radiation treatments. And never in that time told her son. For some of that time, he was away at Coastal Carolina playing football and preparing for the draft. Then, after being drafted by the Bengals in the seventh round, Jeff moved away to start training.

Gunter said she knew if she told him about the cancer battle, “he will stop what he’s doing. He will come home.” She said she didn’t want her son to lose his focus.

And her son, who calls himself Batman and his mom Robin “because we are superheroes together. And we’re gonna get through anything in life,” admits he would have given up his dream of the NFL to be with his mom.

“She’s right,” Jeff Gunter said. “I would have gone home if she would have told me.”

While in training camp, Jeff finally confronted his mom and she could no longer keep the truth from him. But, she told him, she was through her treatment. She would be there for his first preseason game in an NFL jersey.

For Jeff, who wears No. 93, it was a gift to have his mother there cheering for him and witnessing his dream come true.

“This is her dream just as much as it is mine,” Jeff Gunter said. “I’m glad to share it together.”

Still, he wasn’t sure he would make the team. So right before the last preseason game, when final cuts were coming, Jeff said he was in a meeting with the other rookies. They talked about how they might never all be together again and Jeff said he thought of his mom — of all her sacrifice for him and “their” dream. So he sent his mom this series of text messages.

“I just told her, ‘Hey, I don’t think this will be the last one, but if it is, I just want to say thank you for bringing me here, like, being a part of it pushed me farther than I thought I could go, just for being there for me,'” Jeff Gunter said. “And I said, ‘We got one more show guaranteed together, and I’m gonna enjoy every second of it.’ And I just wanted to let her know, like, everything you do is appreciated. And if this is the last one, let it be the best one.”

Jeff Gunter admits he wants to see his mom or hear her voice before every game. He needs to. They embrace, they say a few words to each other and he takes the field in his No. 93 jersey while she takes her seat in the stand in her No. 93 jersey.

Her cancer is managed. She’s doing well. Her son made the team and realized his dream. “Batman” is on the field and “Robin” comes to virtually every game to watch — mother and son sharing superhero-sized love for one another.