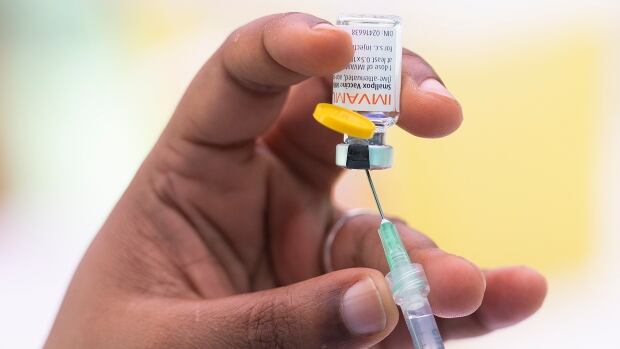 
Top health officials say they are trying to limit the spread of the monkeypox virus while also preventing stigma against those most affected — particularly gay, bisexual and other men who have sex with men — but their messaging may be a part of the problem, according to some advocates.

More than 21,000 people, in over 70 countries, have contracted the virus, which causes painful sores and blisters among other symptoms. An estimated 98 per cent of confirmed cases are in men who have sex with men.

This week, the head of the World Health Organization (WHO), Tedros Adhanom Ghebreyesus, warned stigma “can be as dangerous as any virus and can fuel the outbreak.” At the same time, he urged men who have sex with men to reduce their number of sexual partners or to reconsider having new sexual partners “for the moment.”

The Public Health Agency of Canada (PHAC), which has reported at least 745 cases since the first two cases were detected in late May, also urged men who have sex with men to limit sexual partners, especially casual acquaintances.

“I think when we try to tell people ‘Stop doing this. Stop doing that,’ it doesn’t really work,” Devan Nambiar of the Gay Men’s Sexual Health Alliance in Toronto told CBC News. “It hasn’t worked in any infection.”

It is important to make people aware of the risk factors so they can make informed decisions, and to be compassionate and concise in the messaging, he said, but not to stigmatise people for their sexual activity and behaviour – something gay men, in particular, have endured since the early years of the HIV/AIDS pandemic when the illness was widely considered a “gay disease.”

Lessons learned from that era have been applied to public health care today, but there are criticisms that history is repeating itself with the handling of the monkeypox outbreak.

Some advocates attending the International AIDS Conference (AIDS 2022) in Montreal from July 29 – Aug. 2 say health officials need to prevent the perception that a viral threat, like HIV/AIDS or monkeypox, only affects one portion of the population.

“[We] lived that with the HIV epidemic. We certainly saw that with COVID-19. Let’s not do it with monkeypox, right?” said Linda-Gail Bekker, deputy director of the Desmond Tutu HIV Centre at the University of Cape Town’s Institute of Infectious Disease and Molecular Medicine in South Africa and a past president of the International AIDS Society, which organized the AIDS 2022 gathering.

The conference returns to Montreal for the first time since 1989, a time when access was limited to drugs that could prolong the lives of people infected with HIV. The majority of those dying from AIDS at that time were gay, bisexual and other men who have sex with men, transgender women, as well as injection drug users.

As monkeypox cases spread worldwide, overwhelmingly among men who have sex with men, there is growing concern that public health messages targeting that community have missed the mark.

The monkeypox virus, however, is not a sexually transmitted infection like HIV, the virus that causes AIDS; it’s transmitted through close personal contact with someone who is infected, but also through direct contact with materials that have touched the bodily fluids or sores of an infected person, such as bed sheets or clothing.

Bekker believes that without proper communication and engagement with affected groups — whether it concerns HIV/AIDS or monkeypox — there is a risk of discrimination that may lead to people not seeking or being able to access the services they need.

Gay men take health into their own hands

Nambiar, who will also be attending the AIDS 2022 conference which begins Friday, said gay and bisexual men have long been their own health-care advocates, having to “figure a lot of things out for ourselves” because of “indifference” to the LGBTQ community.

“We have led the work in many things actually, in terms of getting self checks, taking [on] advocacy, taking autonomy in terms of our well-being, fighting for our rights,” he told CBC News.

With monkeypox, he said, gay and bisexual men have been speaking up loudly since early on, calling for paid leave so they can properly quarantine, and to demand access to testing and vaccines.

He said it’s an individual decision to get vaccinated to protect against monkeypox, something about 27,000 eligible people have done so far in Canada, according to PHAC.

Some public health authorities have set up pop-up vaccination clinics at locations frequented by men who have sex with men, including gay bars, bathhouses and cruising areas. The response to monkeypox has been “pretty decent” in Canada, Nambiar said, though he can’t say the same for other countries.

In the U.S., which now has the highest number of recorded cases of monkeypox, the response to the outbreak has been criticized. One AIDS advocate compared the U.S. government’s initial response to monkeypox to their handling of the COVID-19 pandemic, when the country led the world in deaths and less than 70 per cent of the population is fully vaccinated.

The Current20:50Dr. Anthony Fauci on the lessons learned from COVID-19, HIV/AIDS and monkeypox

We talk to Dr. Anthony Fauci about the COVID-19 pandemic, the lessons he learned from the fight against HIV/AIDS, and what the world needs to do to get rising monkeypox cases under control.

As fears grow over monkeypox, and with COVID-19 case numbers again rising, health professionals gathering in Montreal worry about whether the world will be able to meet the UN’s 2030 target to end HIV/AIDS as a global health concern.

There were an estimated 38.4 million people living with HIV/AIDS globally in 2021, with approximately 1.5 million new HIV infections last year. The United Nations said that is a million cases higher than global targets and a sign of “faltering progress.”

This week, at the launch of a new UNAIDS report titled In Danger, UNAIDS Executive Director Winnie Byanyima warned “the response to the AIDS pandemic has been derailed by global crises,” including the war in Ukraine and international economic instability.

“The actions needed to end AIDS are also key for overcoming other pandemics,” she said.

Over the four days of the AIDS 2022 conference, there will be a push to “counter apathy” in combating HIV/AIDS globally and a call “to re-engage and follow the science.”

“Some of this is going on the offensive,” said Bekker, noting there is an additional challenge with the polarization around science that has emerged in the COVID-19 pandemic.

Nambiar said some of that apathy towards HIV/AIDS comes from being “inundated with viruses,” with the mutated variants and subvariants of COVID-19, and now monkeypox.

But he said one of the important lessons that has been learned over the years, that certainly applies today, is that a successful response to a public health emergency requires cooperation between governments, public health workers and community organizations. That didn’t happen immediately with HIV/AIDS, but he sees it developing now in response to monkeypox.

Though there have been remarkable achievements in the last four decades to prevent the transmission of HIV and allow people to live with the infections as a chronic illness, Bekker wants to remind people that doesn’t mean the HIV/AIDS pandemic is over.

“I would say we’ve got the hardest mile to come,” she told CBC News. “We really do need to gird our loins, pull ourselves together as a community and say, ‘What can we do to reach that last mile?'”

Supreme Court set to rule on condom use and consent