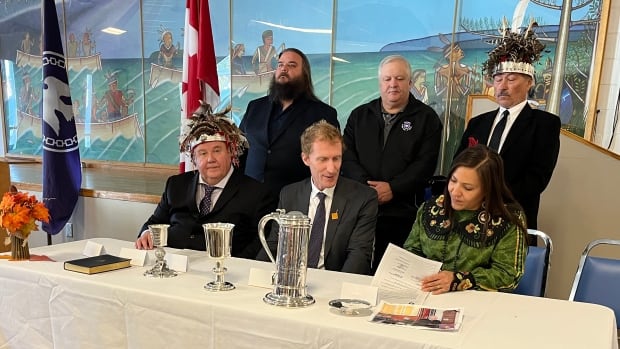 
Tyendinaga Mohawk Territory is now, officially, getting some land back.

At a ceremonial signing on Monday morning, Crown-Indigenous Relations Minister Marc Miller agreed to hand over a 120-hectare plot of land to the Mohawks of the Bay of Quinte (MBQ) band council, along with roughly $31 million in compensation.

The deal’s formal conclusion settles part of a longstanding and at-times acrimonious land dispute about 200 kilometres east of Toronto, but it only covers about a third of the area under claim.

“I think there has to be improvements to the additions-to-reserve policy,” said MBQ Chief Don Maracle.

Maracle said the band has offered a financial settlement package to the adjacent town of Deseronto, but couldn’t offer a timeline for the resolution of the rest of the claim or details on the offer.

“If somebody wants to sell their land, they’ll let us know.”

Miller was also unable to offer a firm timeline when the rest of the claim might be settled, or when the community will take control of the 120 hectares. It must be put through the additions-to-reserve program that Miller called “morbid” and “broken” and sometimes takes years.

“The whole process itself is one that is vested in the Indian Act,” he said.

“We’ve been working with communities to make sure that we’re not within the strict parameters of the Indian Act, because it is a racist document.”

‘A slap in the face’

The disputed land known as the Culbertson Tract includes 448 separate parcels of land and covers most of Deseronto, according to federal briefing documents. Third parties and private property holders occupy much of it, meaning it won’t be easy to resolve the outstanding claim.

Tyendinaga, meanwhile, remains divided on the issue. Some members oppose transferring the land to the council, a creation of the Indian Act whose legitimacy, along with the federal government’s colonial land claims policies, they refuse to recognize.

“I see this as nothing but a scam, a ripoff,” said Mario Baptiste, a Tyendinaga member who was among the first ones on the ground as activists began reclaiming land beginning with an aggregate rock quarry in 2007, stopping work to this day.

“These people were trying to jail us, these very people who are being rewarded.”

Baptiste pointed to low voter turnout in the ratification and accused the band council of leaving out traditional government supporters. He said the land should be returned directly to the people of the Haudenosaunee Confederacy instead.

“I’m from this community. All these suits and dressed-up people in here, none of them were in that quarry. Not one of them,” he said.

From allies to confrontation

In 1793, Deserontyon and some 20 Mohawk families moved to the north shore of Lake Ontario on the Bay of Quinte, about 70 kilometres west of present-day Kingston, in the wake of the American Revolutionary War. There, the Crown granted the Haudenosaunee Confederacy, of the which the Mohawk Nation is one of six members, about 37,500 hectares, “for the sole use and behoof of them and their Heirs for ever freely and clearly.”

Tyendinaga, a 10,000 member community, now possesses about a fifth of that.

The MBQ filed a specific claim — a type of land claim that addresses allegations of land theft or treaty violations — over the Culbertson Tract in 1995, but the claim wasn’t accepted for negotiation until 2003.

But by then, community members, led by activist Shawn Brant, were tired of waiting patiently. They started acting.

In what Brant would describe as a “rotational economic disruption campaign,” activists began re-occupying territory and blockading infrastructure beginning in 2006 and winding down in 2008. Along with a quarry now being returned, a housing development was occupied and stopped, while train tracks and Highway 401 were intermittently blocked.

The direct action tactics sparked internal feuds with the band council and its backers, confrontations with locals, and included standoffs and raids by Ontario Provincial Police riot squads.

Under federal specific claims policy, Ottawa has typically refused to return land, offering only cash compensation to First Nations communities who must buy land back. The return of 120 hectares is a rare thing made possible by what Ottawa calls a separate agreement, whose details remain confidential, with a “willing seller,” local farmholder Terry Kimmett.

“It’s really just been living in a dangerous environment because there’s been no policing,” she said.

“We have had crops destroyed; the quarry is no longer operating. It’s just been a huge financial loss, and it’s been dangerous for us at times living in a major land conflict.”

Despite being one of few private landowners willing to return land to a local First Nations community, Nancy Kimmett has no kind words for the federal government’s specific claims policy, which has wrapped up both Tyendinaga and the adjacent town of Deseronto for 15 years.

It took multiple lawsuits to push the parties to sit down and talk. Terry Kimmett sued the Ontario government in 2012 for $20 million, and the case remains open after it was ordered to trial in 2015, according to the Ontario court registry.

“I also wouldn’t advise anybody to engage in being a willing seller because it’s a very long, drawn out, problematic process.”

Look up! You may get to see the northern lights tonight