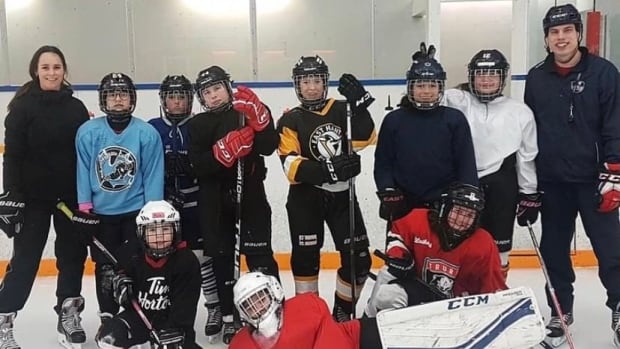 
Ryan Francis, a 27-year-old Mi’kmaw man, is one of three finalists for the NHL’s Willie O’Ree Community Hero Award for his work with the Nova Scotia-based Indigenous Girls Hockey Program.

The program, which operates in Truro, Eskasoni First Nation and Membertou First Nation, was launched in 2020 as a way to break barriers so Indigenous girls could see themselves on the ice.

Francis is a co-founder and works behind the scenes ensuring Mi’kmaw communities feel heard and have the resources to support their athletes.

“I have a responsibility to do this because of how the community has supported me through my sports journey,” said Francis, who is a member of Acadia First Nation.

The Willie O’Ree award is presented to an individual that has made a significant positive change to their community, culture or society through the sport of hockey.

The winner will be determined by fan voting and weighted votes by Willie O’Ree, the NHL’s first Black hockey player, the NHL and by sponsor MassMutual, according to a press release from the NHL. Fans can vote until April 17.

Francis grew up off reserve in Cole Harbour, N.S., known as the birthplace of NHL star Sidney Crosby. Francis started playing hockey at the age of six and played until he was 20, including two years in the American Collegiate Hockey Association.

He always felt the backing of the Mi’kmaw Nation and would often find financial support from Acadia First Nation, a community with six reserves and land holdings throughout the southwest region of Nova Scotia.

Francis says in working with the Indigenous Girls Hockey Program, he consults with communities such as Eskasoni and Membertou First Nations to hear what they need to develop Mi’kmaw talent.

He then goes to partners like Hockey Nova Scotia, Hockey Canada and other sports institutions to let them know exactly what supports the girls need, like equipment and resources.

So, far 190 athletes have participated in the Indigenous Girls Hockey Program.

Although Francis isn’t comfortable with the spotlight the award nomination has brought, he’s hopeful a brighter light is shone on Mi’kmaw athletes, and that all sports become more inclusive.

Erin Denny is a Mi’kmaw hockey player who was coached by Francis during her time with Team Atlantic. Denny says Francis is a great coach and a selfless, humble person who often puts others first.

“He is always trying to give back to the community,” said Denny, adding she couldn’t think of anyone more deserving of the award.

Francis asked Denny to help coach the young girls in the Indigenous Girls Hockey Program, which she says instills a lot of confidence in the girls.

“If I had this Indigenous Girls Hockey Program when I was younger, I definitely would have felt more comfortable and I would have had more fun,” said Denny.

She sees the program as a valuable step in capacity-building for women’s hockey in Nova Scotia. It can help the athletes navigate the different skills camps, spring teams and other opportunities they can apply for.

Ken Bagnell, the CEO of Canadian Sport Centre Atlantic, worked with Francis on different projects over the past eight years, and says Francis is dedicated and tireless in helping remove barriers for Indigenous people in sport.

He feels the success of the Indigenous Girls Hockey Program is a testament to Francis’s efforts.

“It shows that anything can happen if you have the drive to make things happen, and Ryan has that drive,” said Bagnell.

Bagnell says the whole sports community of Nova Scotia is proud of him.

Sydney to enjoy rain reprieve – but not for long