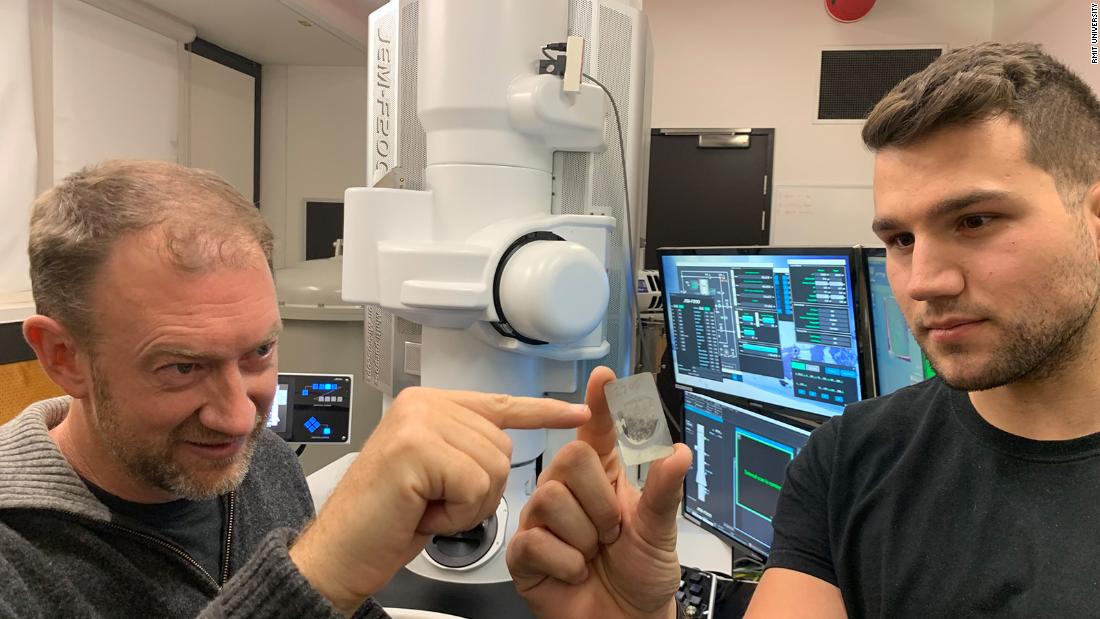 The stone, called lonsdaleite, has a hardness and strength that exceeds that of a regular diamond. The rare mineral arrived here by way of a meteorite, new research has suggested.

The revelation started to unfold when geologist Andy Tomkins, a professor at Monash University in Australia, was out in the field categorizing meteorites. He came across a strange “bended” kind of diamond in a space rock in Northwest Africa, said study coauthor Alan Salek, a doctoral student and researcher at RMIT University in Australia.

Tomkins theorized the meteorite that held the lonsdaleite came from the mantle of a dwarf planet that existed about 4.5 billion years, Salek said.

“The dwarf planet was then catastrophically struck by an asteroid, releasing pressure and leading to the formation of these really strange diamonds,” he added.

With its cutting-edge methods and possibilities for the future, the discovery is exciting, said Paul Asimow, a professor of geology and geochemistry at the California Institute of Technology. Asimow was not involved in the study.

“It really takes advantage of a number of recent developments in microscopy to do what they did as well as they did it,” Asimow said.

The team was able to analyze the meteorite with the help of electron microscopy and advanced synchrotron techniques, which built maps of the space object’s components, including lonsdaleite, diamond and graphite, according to the study.

Diamonds and lonsdaleite can form in three ways. It can be through high pressure and temperature over a long period of time, which is how diamonds form on the Earth’s surface; the shock of a hypervelocity collision of a meteor; or the release of vapors from broken-up graphite that would attach to a small diamond fragment and build upon it, Asimow said.

The method that creates the mineral can influence its size, he added. Researchers proposed in this study that the third method formed the larger sample that they had found.

“Nature has thus provided us with a process to try and replicate in industry,” Tomkins said in a news release. “We think that lonsdaleite could be used to make tiny, ultra-hard machine parts if we can develop an industrial process that promotes replacement of pre-shaped graphite parts by lonsdaleite.”

What is it exactly?

Long before this discovery, scientists have debated the existence of lonsdaleite, Asimow said.

“It seems like a strange claim that we have a name for a thing, and we all agree what it is,” he added, “and yet there are claims in the community that it’s not a real mineral, it’s not a real crystal, that you could have a macroscopic scale.”

Scientists first identified bits of the mineral in 1967, but they were minute — about 1 to 2 nanometers, which is 1,000 times smaller than what was found in the most recent discovery, Salek said.

Finding a bigger sample has shown that lonsdaleite is not just an anomaly from other diamonds, Asimow said.

Regular diamonds, such as the ones you see in fine jewelry, are made out of carbon and have a cubic atomic structure, Salek said. As the hardest material known up until now, they are also used in manufacturing.

Lonsdaleite is also made of carbon, but it has an unusual hexagonal structure instead, he added.

Researchers have come up with models for the structure of lonsdaleite before, and they theorized the hexagonal structure could make it up to 58% harder than regular diamonds, Salek said. This hardness could make the rare space diamond a valuable resource for industrial applications if scientists can find a way to use the new method of production to create minerals that are big enough.

What does it mean for us?

Now that scientists know about this mineral, the discovery raises the question of whether they can replicate it.

Tools such as saw blades, drill bits and mining sites need to be durably hard and wear resistant, so a ready supply of lonsdaleite could make them perform even better, Salek said. And now with a credible scientific theory as to how these larger deposits formed, a rough blueprint exists to make lonsdaleite in a lab.

From this discovery, we can also learn more about the interactions of the universe, said Phil Sutton, a senior lecturer in astrophysics at the University of Lincoln in the United Kingdom. Sutton was not involved in the research.

In uncovering the story of where we come from and how we evolved, he added, it’s important to know that materials were exchanged between environments — even across solar systems.

Scientists named lonsdaleite after crystallographer Dame Kathleen Lonsdale, who in 1945 became one of the first women elected as a fellow to the Royal Society of London.

Dryden, Ont., was all set to host a weekend drag event. Then a performer’s name prompted a police response