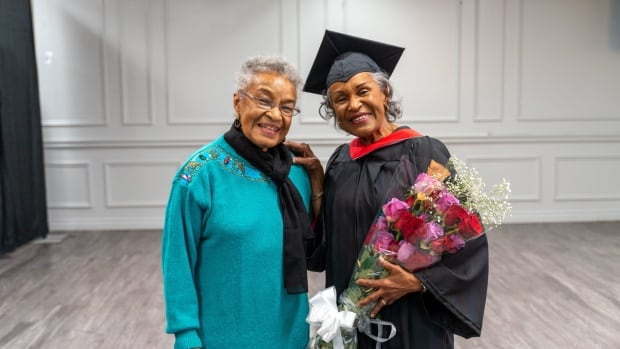 And last Thursday, it was finally her turn.

To the tune of thunderous applause and a standing ovation, the 85-year-old got her chance to walk onstage and receive her bachelor of arts in religious studies at York, which also happens to be where her granddaughter went to university.

“Oh, it was the joy of my life,” said Anglin, a Jamaican-born Canadian.

Anglin graduated from high school in Jamaica more than half a century ago. She was going to continue her education several years ago but had to shelve that plan when her husband of 52 years fell ill.

The resident of Markham, just north of Toronto, says she learned to live independently after her husband died in 2014 before venturing on her path toward higher education. She started with a bridging program before embarking on her degree, and learned how to navigate online learning when the COVID-19 pandemic hit in March 2020.

It was all in the footsteps of Lindo, who did it first at the age of 79.

“Getting my degree was wonderful. I feel that same excitement when I see my sister getting hers,” said Lindo, a Scarborough resident.

“And I know that this is just the beginning for us oldies. We’re ready. We’re ready to rock.”

Anglin says getting her degree has allowed her to learn more about herself, expand her knowledge across different subjects, and it’s given her a newfound confidence to express herself academically. In fact, the degree was just the first step in her journey — she says she already started an anthropology course this fall.

“York is still there and I am still here wanting to learn.”

She hopes other seniors on the fence about returning to school because of their age also take the plunge.