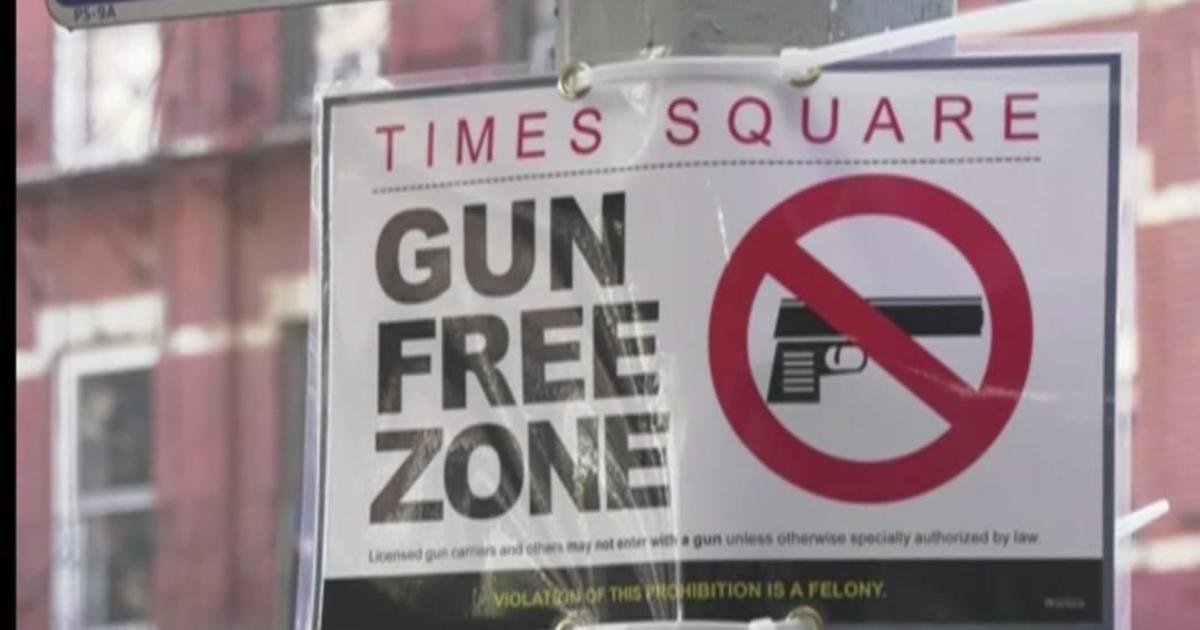 
NEW YORK — Mayor Eric Adams is defying a federal judge and is once again making Times Square a gun-free zone.

He signed a bill on Tuesday making it illegal to carry concealed weapons a wide swath of Times Square. Adams made the move despite a federal judge ruling last week that a gun ban like that is unconstitutional.

The city’s new ban is expected to remain in effect as the polarizing case goes through the appeals process, CBS2’s Marcia Kramer reported.

It goes without saying that Times Square is a people magnet. Adams says about 475,000 pass through the Crossroads of the World on an average day, and on Tuesday he tried to explain why allowing guns in the area is a very bad idea.

“I own three guns. I believe in the right to be a responsible gun owner. This is not an assault on gun owners. This is an assault on making bad decisions that can impact the lives of innocent people,” Adams said.

With passion and precision, the mayor tried to explain why a federal judge was wrong in declaring it was unconstitutional to ban guns in Times Square, and why he was signing a bill to make the area a gun-free zone. The former police captain said that if it was legal there might be as many as 1,000 armed people at any one time in Times Square.

“A gun shot goes off, all of those legal gun owners now take out their guns, don’t know who the bad guy is, who the good guy is. Now you have a thousand people with guns out. There’s no sign on your forehead saying, ‘I’m the good guy,’ ‘I’m the bad guy.’ It’s difficult for trained law enforcement officers to make the split-second decision of who legally is carrying a gun, so how is the average public going to make that determination?” Adams said.

The move comes as the constitutionality of the state law is making its way through the courts. Last week, Syracuse Federal Judge Glenn Suddaby struck down several parts of the law dealing with gun licensing. He also said the state could not ban guns from public places like buses and subways, and from sensitive places like Times Square.

The federal ruling is being appealed by state Attorney General Letitia James.

Meanwhile, the group Gun Owners of America says it will continue to fight.

“We will continue to fight back, until those in Albany recognize that their citizens’ rights shall not be infringed!” tweeted Erich Pratt, the group’s senior vice president.

So far this year, the Manhattan DA has brought 400 gun cases, a 20 percent increase over last year. It’s unclear how long the court challenges of the state law will take. So, for now, the city is taking this action to keep guns out of Times Square.

Marcia Kramer joined CBS2 in 1990 as an investigative and political reporter. Prior to CBS2, she was the City Hall bureau chief at the New York Daily News.