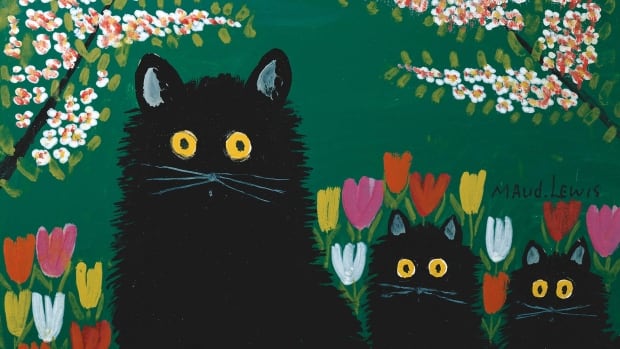 The Current23:24Fakers cashing in on popularity of Maud Lewis paintings

“You could tell that the soiling on it, that somebody had shaved a pencil on their finger and then rubbed [it] in,” said Muncaster, owner of Zwicker’s Art Gallery.

“Old dirt doesn’t look like that,” he told The Current.

Lewis, who died in 1970, enjoyed some recognition in her later years. But her vividly colourful paintings have gained greater international recognition more recently, with London’s prominent Whitechapel Gallery featuring her work alongside Picasso and Andy Warhol last spring.

As that fame has increased, so have the prices her work fetches at auction: a painting found in a thrift store sold for $45,000 in May 2017, a month after the Canadian release of a movie about the artist’s life.

But as price tags have increased, so have concerns about forgeries.

Lewis painted animals and people in rural scenes with bold colours and simple, blocky shapes. Some art experts told The Current that her first forger is believed to have been her husband, Everett, who is alleged to have painted fakes and sold them under her name after she died. (Sixteen years after they paid $5,000 for a Maud Lewis painting, a Halifax couple were devastated last year to learn it was likely a fake.)

Alan Deacon, a retired teacher who lives in Wolfville, bought his first Lewis painting from the artist herself years ago. He’s spent more than 50 years collecting and studying her paintings, and is now considered an expert in the artist’s work.

He insists her simple style is not as easy to copy as people might think — but he was tight-lipped on how he spots the telltale signs of a forgery.

“I don’t want to go into it much. Otherwise, I’m just giving the fakers exactly what they want, so I’d rather not say.”

At Zwicker’s, Muncaster said about one-third of the purported Lewis paintings he sees are fakes. In that recent case, he contacted the owner, explained his concerns, and arranged to send it back.

“Somebody had paid $7,500 for this one and they thought it was a real bargain,” he said.

“I don’t claim to be an expert, but, you know, I have a little more experience than the next person [and] I wouldn’t touch the thing with a bargepole.”

Questions about paintings in premier’s office

While speaking to experts on background for this story, The Current learned that there are even questions about two Maud Lewis paintings hanging in Nova Scotia Premier Tim Houston’s office.

The paintings, titled Boat and Sled, are on loan to the office through the Nova Scotia Art Bank Program, an initiative run by Arts Nova Scotia, a provincial government agency. They were purchased by provincial authorities in 1982.

The Current alerted Arts Nova Scotia to concerns about the paintings, and asked to bring an expert to view them in person. (When shown photographs, experts that The Current spoke to on background said at least one of them was very suspicious.)

Arts Nova Scotia said the paintings would be authenticated by the organization this fall, but declined The Current’s request to be involved.

Lewis was born in 1903. After marrying Everett in 1938, they lived in a small one-room house outside Digby, N.S. Despite debilitating rheumatoid arthritis that affected her hands, she painted her vivid scenes on wood panels, old wallpaper and even beach shells, using leftover house and boat paint. She sold her paintings for just a few dollars on the side of the road by her house, every surface of which she covered with bright flowers, birds and butterflies.

Fred Trask knew Maud and Everett Lewis. The Nova Scotia folk artist lives in Dartmouth, N.S., and is respected in his own right, but his name comes up again and again in conversations with experts around fakes of Lewis’s paintings, allegations of forgery that he denies.

“I’m not the faker of Maud Lewis,” he told The Current.

“There will be people that says I have. Maybe it’s one I bought that was already fake, that I sold. I will admit, maybe I did run into one that was fake already,” he said.

Trask said he’s heard of other forgers operating over the years, including Maud’s husband Everett before his death in 1979, and the practice could have been widespread.

“I think realist artists were also faking Maud, but they’d probably do one, get a big price and then stop. So it’s hard to fathom out who did what, where and when,” he said.

John Risley, who formerly ran Clearwater Seafoods, owns one of the world’s largest private collections of Lewis paintings, and regularly loans out some of his 300 works for public display.

Her paintings hang along the staircase of his Halifax home— so he sees them first thing in the morning and last thing at night — and he told The Current he enjoys their exuberance and colourful details, like fruit blossoms on trees that shouldn’t have any.

“She didn’t let realism get in the way, right? It was always about imagination and colour and [trying] to make the painting come alive and making it dance in your mind,” he said.

His collection includes Christmas cards drawn in pen and ink, originally sold by Lewis for 10 cents, and now fetching thousands of dollars.

That price increase has attracted new buyers to the art world, including Chad Brown in Halifax, who saved up and invested $14,000 in a Lewis painting of oxen and tulips a few years back.

He told The Current that at the time he thought it was a huge amount of money, but later decided “just for giggles, I’m just going to post it and see what I could make off of it.”

“I thought, ‘Well, jeez, there’s a bigger demand than I thought,’ and then from there, it just kind of snowballed, one after another.”

WATCH | A 1965 profile of Maud Lewis at work in her Nova Scotia home:

Brown remembers that first sale made around $10,000 profit. He used to manage a tavern, but in the past three years he’s made a living buying and selling Lewis paintings, flipping about 55 so far.

He said he’s very cautious about forgeries, relying on expert authentication and even travelling internationally to view the paintings up close before he completes a purchase. He always asks where a seller got a painting, and vague stories raise red flags.

But Brown loved that very first Lewis painting so much that he had trouble letting it go. Filled with regret, he contacted the buyer and arranged to trade it for another Lewis.

“I had so much regret because it was my first one, and it was beautiful. And what did I do when I got it? I resold it again,” he said.

“The market is so hot, I said, ‘I can’t justify keeping this much money up on a wall,'” he said.