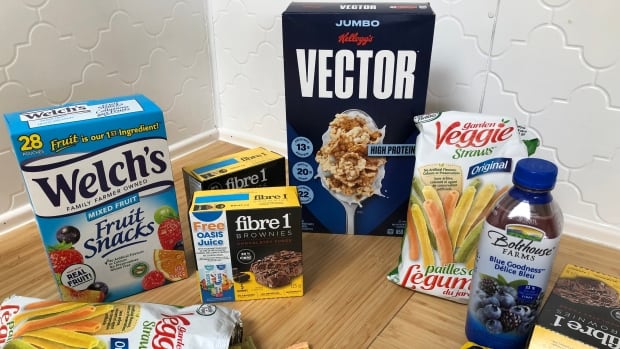 
Their packaging promises big healthy benefits — high fibre, high protein, real fruit and more — but a CBC Marketplace investigation reveals what’s really inside five popular foods whose labels may make them seem healthier than they are.

“A ‘health halo’ is basically the perception that a food is better than it says it is, with very little evidence to back that up,” said Toronto registered dietitian Stefania Palmeri.

“When I see products like this it is frustrating as a dietitian because I can see how consumers fall prey to that.”

While most of the labels meet government labelling requirements, Palmeri and childhood obesity expert and endocrinologist Dr. Robert Lustig agree the following products don’t deliver on packaging promises. They question if Canada’s labelling rules do enough to protect consumers against potentially misleading labels.

CBC Marketplace takes a closer look at five popular foods whose labels make healthy claims that may be too good to be true.

The most misleading, say these nutrition experts, is the bold “high protein” claim on the front of Kellogg’s Vector meal replacement — found in the cereal aisle.

In bold lettering, the box claims “high protein” with “13 g of protein.” But a close look at the nutritional information on the side panel shows the product has less than half of that — 5.7 grams per serving.

Consumers only get the full protein claimed on the package if they add 200 millilitres of skim milk — meaning the majority of the protein doesn’t come from Vector itself.

“Calling cereal ‘high in protein’ but only when served with milk is silly,” Palmeri said. “Almost like advertising bread as high in protein but only if combined with peanut butter.”

Vector has a tiny disclaimer that says skim milk needs to be added to achieve the protein claim.

Because it calls itself a meal replacement, not a cereal, Health Canada’s labelling rules allow it.

The product’s marketing often targets active people who want to boost their protein intake, like Swimming Canada athlete Kate Hulford, who eats Vector as a snack without milk because she’s lactose intolerant.

She was surprised when Marketplace revealed to her she wasn’t getting the full 13 grams of protein per serving advertised on the front of the box.

In a statement, Kellogg’s stated that Vector’s label is “factual and transparent.” The company went on to say that it has gone above and beyond Canadian food label requirements by adding the protein content information with and without milk on the side of the box.

‘Vegetables mostly in name only’

The website for Sensible Portions’ Garden Veggie Straws says “the combination of garden grown potatoes, ripe vegetables, and no artificial flavours provides a better-for-you snack.” But don’t let that fool you into thinking this is a healthy choice, say dietary experts.

“When I talk to people about snack foods, they often mistake this as a healthier salty snack compared to a potato chip,” she said, “but it’s even more highly processed and it’s nutrient poor.”

‘Nothing but a candy,’ says doctor

Welch’s Mixed Fruit Snacks features images of fruit on the box, and bold lettering that advertises “fruit is our first ingredient” and “made with real fruit.”

But experts point to the ingredients listed that show the product is mostly fruit purée, a method of processing fruit that can eliminate much of what makes it healthy.

“This is nothing but a candy, and should be advertised as such,” said Dr. Robert Lustig, an endocrinologist and professor emeritus of pediatrics at the University of California, noting there’s 10 grams of sugar per serving.

Small print on the side of the box reads: “Not intended to replace fresh fruit in the diet.”

Welch’s has been in the news before for U.S. lawsuits over its “real fruit” and nutritional claims, but those lawsuits were either dismissed or settled.

The company wrote Marketplace that it stands by its label and “all brand communication,” and its customers “understand” the snack is not intended to replace fresh fruit in the diet.

The package for Bolthouse Blue Goodness beverage features a lot of antioxidant- and fibre-rich blueberries and blackberries on the front of the bottle, but the dietary experts say don’t be fooled.

The bottle says that 250 millilitres has “21% daily value fibre,” but experts say much of the fibre isn’t coming from the berries on the packaging, but from a chicory root fibre supplement called inulin.

“I think some people may perceive that all that fibre is coming from the beautiful berries on the label,” said Toronto registered dietitian Leslie Beck, “and in that sense it is misleading.”

“It’s a bit of a trick to make people think that by adding inulin to jack up the fibre content of fruit juice, makes that juice as nutritious as whole fruit,” Beck went on, noting that Health Canada now wants Canadians to limit fruit juices in their diet.

As of 2019, the Canada Food Guide considers juice a “sugary drink” and recommends Canadians replace sugary drinks with water. The consumption of sugary drinks, the guide says, is associated with the increased risk of obesity, type 2 diabetes and dental decay.

Add to that, the product claims it has “7½ servings of fruit” per bottle, but Marketplace found Health Canada no longer allows that type of claim. The Canada Food Guide no longer classifies juice as a “serving of fruit.”

After Marketplace asked Bolthouse about this, the company said the label will change next year.

As for the added inulin, the company wrote that it is for fibre benefits, and the juice from concentrate keeps the product affordable.

Fibre brownies ‘too good to be true?’ asks dietitian

Marketplace also looked at Fibre 1 Chocolatey Fudge Brownies, where the packaging says it provides five grams, or 20 per cent of daily fibre.

According to Health Canada, women need 25 grams of fibre per day and men need 38 grams per day.

Much of the fibre in this product comes from inulin, or chicory root fibre, which has some digestive benefits but can also cause discomfort, particularly to those with gastrointestinal issues, said Palmeri.

Deni Ogunrinde has Irritable Bowel Syndrome (IBS-C), a condition that can cause repeated abdominal pain, constipation, or both, so she watches everything she eats.

When her doctors said she needed more fibre, the Toronto woman tried different products, including some Fibre 1 foods. She said she was in so much abdominal pain she now completely avoids any products with inulin.

“This is a type of fibre that not only wouldn’t help me, but would actually make my symptoms worse,” Ogunrinde said.

General Mills, which owns Fibre 1, didn’t respond directly to Ogunrinde’s response to inulin. The company wrote that it follows Health Canada’s Food and Drug Regulations for all labelling and fibre claims, and clarified that some of the added fibre is coming from sugarcane, as well as inulin.

Dr. Lustig believes it will take “an outcry from the public” before Health Canada, the agency in charge of developing food labels, changes the rules.

Both Health Canada and the Canadian Food Inspection Agency (CFIA) declined interviews or to comment because “the questions are focused on product compliance.”

The CFIA, the agency in charge of enforcing food label regulations, wrote that consumers who believe a food product is not compliant or think a food label is misleading can use the following link to make a complaint.

The CFIA says it will review reports of non-compliance and take appropriate action when necessary.

Palmeri offered this advice to consumers: