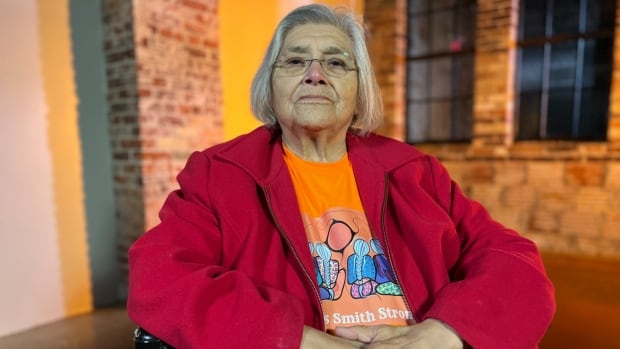 Maria Linklater first started caring for children when she herself was still a child.

Decades later, after raising her own children and more than 350 foster kids, the Nehiyaw (Cree) woman continues to stand up for future generations.

The 80-year-old is known in Saskatoon and beyond as a fighter for children in care and for Indigenous families.

Linklater was born at Thunderchild First Nation in Saskatchewan and was raised there by her grandmother.

She was one of eight sisters in the family. She said helping each other was a big part of their early childhoods.

“It takes a whole community to raise a child,” said Linklater.

“Those were the days where it was so nice. You could just trust people. You left your doors open.… And if you need a babysitter, we’d babysit.”

Linklater was forced to go to residential school when she was about seven years old, she said.

The young girl from Thunderchild hated the institution. She was not allowed to speak her language, nēhiyawēwin, but she did it anyway.

“I’d get a licking for it, but I’d still speak it,” said Linklater.

As she had at home, Linklater started looking after the little ones.

“We’d get a licking all the time, and you were just [treated like] a worthless human being.”

The fight for her sister’s children

Eventually Linklater got out of the school and married.

But the pain from the time in the school didn’t disappear, for Linklater or for other survivors.

“We were all not well at all. We were just hurting.”

Some tried to kill the pain with alcohol, she added. One of them was her sister, whose children were taken away.

The family couldn’t afford a lawyer, and nobody came forward to provide legal advice or help, said Linklater.

When the children went up for adoption, she was heartbroken.

After a long fight, Linklater was able to bring one of the children — the youngest girl — back to the family.

“She was special needs,” said Linkater. “She was 11 months old when I got her, [a] tiny little baby.”

The others were adopted in the United States, said Linklater.

This was the beginning of Linklater’s lifelong dedication to children in care.

She knew there were other people hurting, with nobody to stand up for them, she said.

Linklater was ready to fight.

The Morning Edition – Sask6:13Maria Linklater has spent a lifetime advocating for Indigenous children in care

Maria Linklater first started caring for children when she herself was still a child. Decades later, after raising her own children and more than 350 foster kids, the Nehiyaw (Cree) woman continues to stand up for future generations.

Linklater’s niece was far from the only child she ended up taking into her home. In addition to their own and other family kids, Linklater and her late husband, Walter, would take care of more than 350 foster children, she said.

She mentions one of them, now a white-haired man with his own grandchildren, who still comes to visit her.

“I was only nine years older than him, and I was parenting him,” Linklater remembered.

“I raised him for a whole year, and I didn’t get paid or anything. I didn’t want to get paid.”

Parenting wasn’t always easy. The intergenerational trauma of residential school and colonization left its mark, and not only on Linklater.

Culture and spirituality, especially ceremonies, have helped Linklater throughout her life, and she continues to pass them on to the next generations.

Teaching the next generations to fight for children

Linklater’s journey to advocate for Indigenous children in care isn’t over.

More than half of all kids in foster care Canada-wide last year were Indigenous, despite representing only 7.7 per cent of children 14 and under in the country, according to the latest census data. The number of Indigenous children in foster care remains almost unchanged since 2016.

“We get hurt every time a child gets taken away,” said Linklater. “The child doesn’t even have to belong to us. We see the mother cry.”

Now Linklater teaches other women to be strong and to fight for children.

One of them is Shannon Kay.

The mother of seven is originally from Kawacatoose First Nation in Saskatchewan, but has been living in Saskatoon since she was 13 years old.

Kay started working with Linklater about four years ago when she had to fight for her adopted children, she said.

“It was very important [to have Linklater by my side],” said Kay. “She taught me how to advocate for myself and for other women and children.”

Now Kay is following in Linklater’s footsteps and providing support to mothers, helping to keep children at home with their families.

She wants to make sure parents know their rights, and seek advocates and legal advice before signing any papers, she said.

But Linklater is more than a mentor for the young woman. Kay calls Linklater her adopted mom, while her children see the 80-year-old as their grandmother.

“We started working with her to help my adopted daughter, and throughout the years she adopted me as her daughter,” said Kay about Linklater.

The federal government says on its website that it wants to reduce the number of Indigenous children in care. New legislation is in place to help with the process and to improve child and family services.

Linklater says there might now be a golden opportunity to bring Indigenous children home, but she still doesn’t trust governments or their agencies.

“They lied to us so much,” she said. “There’s so much hurt and pain and no trust. And once you violate trust, you’re gone forever, nobody’s ever gonna trust you.”

Linklater said more resources are needed to provide counselling for the children who have been stuck in the foster care system.

She is also advocating for strong leadership.

“If you don’t have kindness and honesty, and you don’t love yourself, you’re not going to make a good leader.”

In Saskatoon, Linklater is well-known as a cultural leader, mentor and knowledge keeper.

During the 2022 Tony Cote Games in Saskatoon, for example, Linklater provided “teepee teachings” to the young athletes in the cultural village.

She and her late husband have served as elders with the Saskatoon Police Service since the 1990s, providing advice and knowledge, according to police.

Despite her years of service, Linklater knows that her work isn’t done.

This week, she is looking forward to National Day for Truth and Reconciliation and Orange Shirt Day, which both take place on Friday.

“Every child matters,” she said.

“The grandparents wear orange, the grandpas wear orange. Everybody wears orange, even the babies. And it brings healing to my mind, because I was in a residential school. I knew some kids that died and they weren’t supposed to die.”