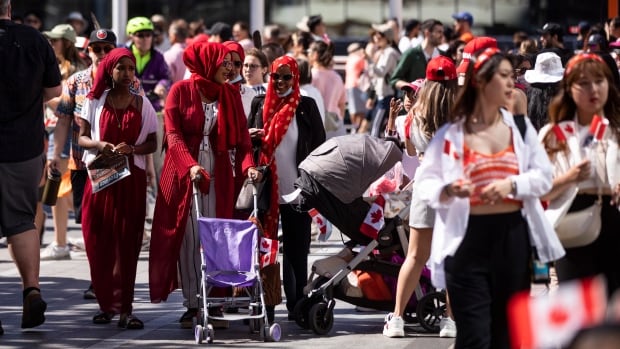 
A majority of Metro Vancouver residents now identify as a visible minority, according to terminology used by Statistics Canada in the 2021 census.

New data from the census released Wednesday shows that 54 per cent of the people in the region identified as a visible minority, up from 49 per cent in 2016.

According to Statistics Canada, the largest non-white ethnic groups in Metro Vancouver are Chinese (comprising 19.6 per cent of the population), South Asian (14.2 per cent) and Filipino (5.5 per cent).

“I just think it talks to how our community is changing,” said Andy Yan, director of Simon Fraser University’s City Program.

“Older ways of viewing Metro Vancouver — not just Vancouver and Richmond, but places like Surrey and Langley — are ones that need to change with the times, and this is just one marker.”

The municipality with the highest proportion of people identifying as a visible minority was Richmond at 80.3 per cent, followed by Burnaby, Surrey, Coquitlam and then Vancouver at 54.5 per cent.

The data came in the sixth of seven releases from Statistics Canada on the 2021 census, and focused on the “portrait of citizenship and immigration,” mobility and migration, and “ethnocultural and religious composition of the population.”

When it came to religion, 52 per cent of B.C. residents said they did not follow any, the highest number of any province.

The final release of data will come on Nov. 30, containing information on education, careers and modes of getting to work.

Yan said with most of the census data now released, it would be interesting to see the analysis in the months ahead.

“It’s one way through which we see the implications of social and economic inclusion,” he said.

“The census really provides a measure to start the conversation, instead of ending it.”

Webb telescope shares a peek inside the early universe