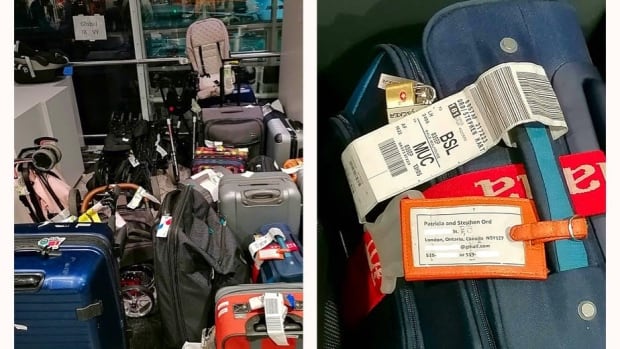 
Stephen Ord of London, Ont., was one step ahead when his luggage was misplaced while he was taking a Lufthansa flight from Paris to Basel, Switzerland, this month.

Ord had thrown a GPS tracker into his luggage.

Now, he and his wife are thanking a stranger, the tiny technology — and a bit of luck — for saving their belongings.

At the beginning of September, Ord and his wife drove to Toronto’s Pearson International Airport for their flight to Europe, where they were to board a cruise on the Rhine River, but their flight was rerouted through Munich.

When the couple finally arrived in Basel, there were no bags.

“I had one of those Apple locates in my luggage,” said Ord. “I told the lady in Basel, ‘Our luggage is still in Munich. It is at Terminal 1,’ and she said, ‘No, our system will tell us where it is.’ They weren’t interested in the tracker.”

Then, by some amazing coincidence, this email landed in Ord’s inbox:

My name is Mandy and I arrived just at Munich Airport. While waiting for my own luggage I noticed all the ones standing aside. I saw your one with the email address at the tag.

So if you lost your luggage… It is in Munich.

If it’s not yours I’m sorry for disturbing.

I attached you a picture.

“I came back from a work trip in Barcelona, Spain, and flew back to Munich, and I was waiting for my luggage at the belt,” Mandy Philip, who lives in Germany, told CBC London.

“There was a massive amount of bags standing around,” Philip said. “There’s one with a big name tag and the email address on top of it. Because I was waiting so long and we had a lot of stories that bags got lost in Germany … I just thought, ‘I’m gonna write them.'”

Shortly after Ord received the email, he showed it to employees at Lufthansa Airlines and this time, they listened, he said. It wasn’t long before he noticed the tracker in his bags starting to move.

“It went from Terminal 1 to Terminal 2, then it went from Munich to Zurich, and then in Zurich it was picked up by a courier,” said Ord.

The couple got their bags three days later.

CBC has reached out to Lufthansa for comment Thursday but hadn’t heard back at time of publication.

“Most airlines use traditional search methods and are ill equipped to deal with passengers who can say where their baggage is,” said Air Passenger Rights founder and president Gabor Lukacs.

Lukacs also worries that if more passengers start using GPS trackers, the responsibility of managing a bag’s location may soon fall to the passenger, not the airline.

“The airline is liable for damages caused by delay of a passenger’s baggage, up to about $2,300 per passenger,” he added.

“If the passenger tells the airline that, ‘Hey, my baggage is at location X,’ and the airline still does nothing to return it, it could be wilful misconduct, and the airline could be liable for even a higher amount,” said Lukacs.