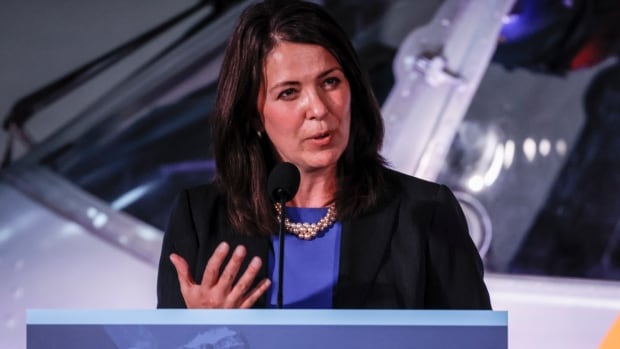 
This column is an opinion from Graham Thomson, an award-winning journalist who has covered Alberta politics for more than 30 years. For more information about CBC’s Opinion section, please see the FAQ.

Get used to it. That appears to be where we’re headed after watching the first official leadership debate Wednesday evening in Alberta’s United Conservative Party race to replace Premier Jason Kenney.

There might be seven people on the track but Smith seems to be the only one with a steering wheel — and she’s leading everybody in circles with no off ramp.

She is setting the agenda and the rest are eating her dust.

This doesn’t necessarily mean she will win the race that will grind along until Oct. 6, but the debate laid bare, in very subtle ways, how the race is shaping up.

Pretty much every candidate attacked Smith at some point — because they see her as the front-runner that must be stopped.

In response, Smith took shots at her opponents but in her closing remarks made a point of praising all of them individually — because she sees herself as the front-runner who might need to rely on some of them for support in the final vote on Oct. 6.

The UCP leadership race to replace Jason Kenney as party leader — and also premier — is a complicated affair that largely runs beneath the surface as the seven candidates compete to sign up new members while trying to sway existing members.

It is not, like general elections, a first-past-the-post system where the person with the most votes, compared to the others, wins.

In the UCP race, the winner must have a majority. That’s why the party is using a preferential ballot system where members rank each candidate from their first choice to their last choice on the ballot.

That’s why candidates who see themselves as front-runners won’t attack those perceived to be also-rans for fear of alienating their supporters.

It’s why, for example, during the debate nobody was needling MLA Leela Aheer whose logical, decent, science-based campaign is not exactly setting the province abuzz. They might need her later.

The most heated moments of the debate occurred between the ones who see themselves as having the greatest chance of winning and who won’t need each other’s supporters for votes.

Smith and former finance minister Toews mixed it up over many issues including a provincial sales tax.

“There’s only one person again on this stage that I’m aware of that has talked about implementing a PST and raising taxes on Albertans by $5 billion,” said Toews pointing his finger figuratively at Smith.

Former Wildrose leader Brian Jean got into a similar scuffle with Toews but it was a sidebar. The spotlight was on tussles involving Smith.

Smith and Toews suspect they might very well be in a slugging match for the victory on the evening of Oct. 6, and thus don’t care if they alienate each other’s supporters.

But even if those two are indeed the top dogs, the race might go sideways, as it did in 2006. Ed Stelmach, who was in third place, catapulted ahead to win the Progressive Conservative leadership race on a preferential ballot as the two clear front-runners, Jim Dinning and Ted Morton, pounded each other into the ground.

That’s why former transportation minister Rajan Sawhney and former children’s services minister Rebecca Schulz are happy to position themselves in third spot, hoping that the two front-runners trip each other up on the homestretch and allow them to “pull a Stelmach” (my words).

They didn’t attack each other during the debate because they are fishing in the same “mainstream Conservative” stream and might rely on each other’s supporters later.

Instead, they directed their vitriol at Smith, with Sawhney repeatedly ripping into Smith’s “risky and hot-headed ideas” that includes the sovereignty act and Smith’s recent comments suggesting cancer patients had “complete” control over the disease and thus implying they were to blame for their own illness.

If Smith is setting herself up as the anti-establishment candidate, Sawhney is positioning herself as the anti-Smith candidate. Sawhney doesn’t care if she alienates all of Smith’s supporters because Sawhney is hoping to grab headlines while hoovering up support from UCP members who see Smith as a threat, not just to their party but the province.

In 2006, Stelmach’s other ace in the hole was targeting specific Albertans to join the party and vote for him. He wooed rural voters in northeastern Alberta, many of them descendants of Ukrainian immigrants like himself.

Therein lies another path to victory: out-hustle everybody else to recruit new members and/or convince existing members to support your campaign.

It is a difficult, almost impossible, target to hit with seven candidates, but Smith is targeting a motivated group: Albertans who are anti-maskers, anti-vaxxers, anti-Trudeau, and pro-Alberta Sovereignty Act.

And it seems to be working.

For weeks, she has been the only candidate routinely drawing large crowds and creating headlines.

Another factor to consider: will we have all seven candidates until the bitter end? Or will some begin to drop out and throw their support behind another candidate?

Interestingly, Independent MLA Todd Loewen was the one candidate who didn’t go after Smith. He instead targeted Toews.

I’m not saying that Loewen, who moves in lockstep with Smith on many issues, was acting as a proxy for her by attacking Toews or that he will, at some point before the vote, drop out and throw his support to Smith.

But watching Wednesday night’s debate and doing the political math, the thought did cross my mind.

Supreme Court set to rule on condom use and consent