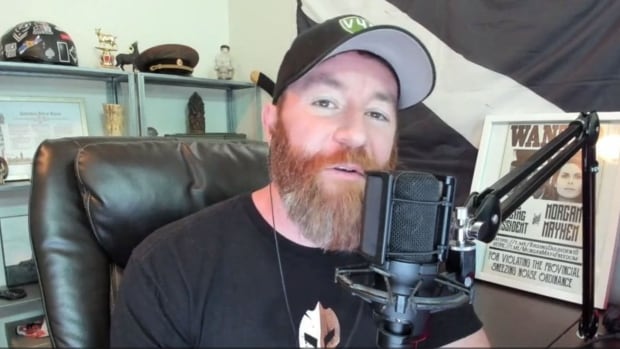 
A Saskatoon judge denied bail to the leader of the controversial Diagolon movement Friday.

Jeremy MacKenzie, 26, is facing multiple gun-related charges stemming from an incident last November near Viscount, Sask., which is about 75 kilometres southeast of Saskatoon.

The allegations include assault, pointing a firearm, mischief and careless use of a restricted weapon.

Mackenzie was arrested last week at his home in Cole Harbour, N.S., on a Canada-wide warrant and remains in custody.

The reasons for keeping MacKenzie behind bars cannot be reported because of a court-ordered publication ban.

The Saskatoon courtroom was filled to about 75 per cent capacity. MacKenzie sat in the prisoner’s box wearing a grey sweatshirt.

There was a heavier-than-usual police presence outside the courthouse. CBC counted five police SUVs in the immediate area, and four deputies were posted inside courtroom. Police confirmed the officers were there for MacKenzie’s hearing.

Diagolon, the organization MacKenzie leads, was identified in a House of Commons report as an ideologically motivated and violent extremist organization.

There are also connections between Diagolon and extremists who were arrested at the Coutts, Alta., border crossing during the February convoy protest.

Hand sanitizer may have contributed to 3-alarm fire in Fort Worth, officials say