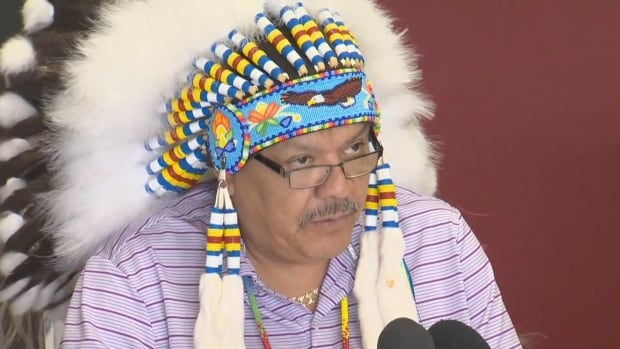 
The Assembly of Manitoba Chiefs and several other plaintiffs have filed a lawsuit seeking $1 billion from the Manitoba government and the Attorney General of Canada on behalf of First Nations children, families and communities impacted by the child welfare system.

AMC’s First Nations family advocate filed a statement of claim with Court of King’s Bench Thursday seeking the damages for those affected between 1992 and present day.

Cornell McLean, deputy grand chief of the assembly, said in addition to $1 billion in compensation, the proposed class-action lawsuit calls for properly funded resources for First Nations children and an end to “discriminatory practices that result in the apprehension for so many First Nation children.”

“Before colonization it would be unthinkable to remove a child from their family, nation, lands and culture,” McLean said during a Thursday news conference.

“The lawsuit is necessary to hold governments accountable for the harm they have caused for decades.”

The lawsuit comes three months after the federal government reached a $20-billion settlement in principle with the Assembly of First Nations and other plaintiffs following two class-action cases.

The cases related to First Nations children removed from their homes on-reserve between 1991 and this spring, among other issues related to Canada’s discriminatory child welfare system.

Cora Morgan, First Nations family advocate with AMC, said that agreement only accounts for about 40 per cent of First Nations children in Manitoba who have gone through the federal child welfare system.

The new lawsuit looks at the other 60 per cent of children, their families and nations, that wouldn’t be covered in that other compensation process — and specifically pertains to youth apprehended off-reserve.

During the news conference, Amber Laplante, a mother from Little Saskatchewan First Nation in Manitoba’s Interlake and one of the plaintiffs in the lawsuit, said the system exposed her to “violence and trauma” and failed her and her daughter.

“Just as I experienced, throughout my daughter’s life, the system has failed to make sure she is cared for or given the opportunity to thrive,” she said.

“I am bringing this claim because First Nations youth that were vulnerable like I was need support that the system can never provide.”

Roberta Godin, another plaintiff, shared similar sentiments, saying no child should grow up apart from their family.

‘The separation caused us great harm’

Plaintiff Roberta Godin fights through tears while detailing the impact of Manitoba’s child welfare system on her family.

“Instead of supporting us in our time of need, the system just simply took my children and my grandchildren away,” she said.

“I had to fight with all my strength for many years to be reunited with my children. I was successful but the separation caused us great harm.”

Misipawistik Cree Nation Chief Heidi Cook, a member of the AMC’s Women’s Council and also a plaintiff, said the goal of the lawsuit is to hold the provincial and federal governments accountable for harms caused by the child welfare system.

“When our children are removed, our nation is robbed of its future leaders and advocates, and these connections may never be restored. We cannot rebuild our nations if our children continue to be taken,” said Cook.

“The child welfare crisis should bring shame on Manitoba and Canada and cannot be allowed to continue to harm our people.”

There are roughly 9,100 children and youth currently in Manitoba’s child welfare system, according to Manitoba Families’ latest annual report.

AMC says 80 per cent of those children are First Nations. Many of them are apprehended off-reserve, including 75 per cent in care in the south of the province, according to AMC.

“When you think about the extraordinary numbers … attach the parents to that and you attach the grandparents, and the aunties and uncles — it’s felt by thousands of our people,” said Morgan.

She said her office has managed to reunite or prevent the apprehension of over 4,300 children, though she says “there’s so much damage that we cannot undo.” That damage includes homelessness, incarceration, mental health challenges and other issues “most Canadians aren’t faced with,” she said.

“I think that it’s important in this age of reconciliation that people understand that today in our child welfare system that there are thousands of children that have been taken from their parents,” she said. “There has to be better ways.”

Families Minister Rochelle Squires said she couldn’t speak specifically about the lawsuit, but said the provincial government is working to reform a child welfare system that must be fixed.

The number of children in CFS care has dropped by about 700 from 2021, when there were 9,850 children and youth in care.

Squires said that is an improvement but remains too high.

The Assembly of Manitoba Chiefs and several other plaintiffs have filed a lawsuit seeking $1 billion from the Manitoba government and the Attorney General of Canada on behalf of First Nations children, families and communities impacted by the child welfare system.