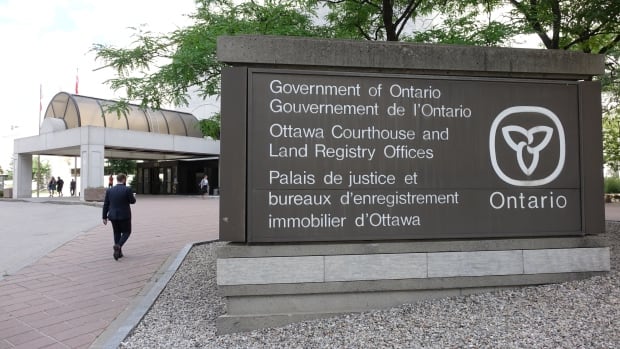 Law in the time of COVID: How the pandemic radically reoriented Ontario’s justice system


When Erin Townley had to testify against the man who nearly killed her, she took solace in the fact the COVID-19 pandemic meant she could do it from her own home.

In 2018, Townley had been riding with a group of cyclists around Lake Ontario, raising money for pancreatic cancer, when the driver of a grey Nissan veered onto the highway shoulder and slammed into them.

Townley was struck so hard she lost consciousness. When she woke up, she was cradling her fractured forearm.

Another rider, Jeff Vervaeke, wasn’t so lucky. He bounced off the Nissan’s windshield, flew into the air, and was found a short distance away, lying in a pool of blood and gasping for air.

He was rushed to a Kingston, Ont., hospital, but died five days later.

“It was easier to do that when I was sitting in my dining room, and had my animals around me [as] a source of comfort and support.”

In the time between the fatal crash and the ensuing trial, COVID-19 forced Ontario’s justice system — and others around the world — into uncharted, occasionally choppy online waters.

As in-person matters ground to a halt, courts and tribunals were outfitted for virtual hearings. Ontario Attorney General Doug Downey rolled out a quick $1.3 million for laptops, virtual private networks (VPNs) and other technology.

Behind the scenes, exhibits and other court files were being digitized, a huge shift for a system that relied on paper copies for just about everything.  As Downey said in April 2020, the limitations imposed by COVID-19 had “modernized the justice system 25 years in 25 days.”

“It was initially a pretty jarring transition,” said Michael Spratt, a criminal defence lawyer in Ottawa.

“The courts were … forced to move from the 1980s or 1990s right up to modern-day standards basically overnight. Prior to the pandemic most things, if not everything, was done in person.”

But gradually the wrinkles smoothed out, Spratt said, and some advantages became apparent — like the fact certain witnesses, such as experts, could be patched in remotely instead of potentially being flown in great distances at substantial cost.

Defence counsel can more easily represent clients in “far-flung” areas, Spratt said, while simple matters like pleading guilty for a probation violation can be done remotely.

But Spratt said the digitization of court documents has been perhaps the most substantive change, allowing cases to proceed without “razing a small forest.”

“It’s unfortunate it required a global pandemic to get rid of the fax machine and move to email. But nonetheless it’s happened, and that’s a positive thing.”

With any shift of this magnitude, though, there have been stumbles — some amusing, others less so.

For Cornwall, Ont., family and criminal lawyer Neha Chugh, her “worst day” in virtual court came when her toddler barged into the nursery she’d outfitted as a makeshift office.

“Everyone on the Zoom call is watching and laughing, because they all can see him. So I stand up to remove him — and I’m wearing a blazer on top and pyjama shorts and fuzzy socks on the bottom,” said Chugh. “It was quite a spectacle.”

Another time, she was making “very serious submissions on a very serious motion” when she realized her shirt wasn’t exactly arrayed the way it was supposed to be.

Despite those wardrobe malfunctions, Chugh champions the online transition and the fact it’s made court more accessible for her clients, many of whom are spread out across eastern Ontario.

But even something like a simple shirt mix-up belies a potential problem: virtual hearings can lack the “solemnity” of those in person.

“That’s what worries me,” Chugh said. “People wait a long time for their day in court. And if it’s not everything they expected it to be in terms of the seriousness, it can be a letdown.”

That solemnity hasn’t always been apparent to viewers beaming in for proceedings, either. Since the online transition, judges have had to remind people streaming court matters without clear consent is prohibited, including during the recent bail hearings for the leaders of the Ottawa convoy occupation.

Broadcasting hearings can be a grievous violation of a person’s right to privacy, said Toronto-based defence lawyer Jessyca Greenwood, particularly when the case involves sexual assault.

But the fact it’s happening at all shows the limits of video conferencing technology like Zoom, which caps how many viewers can log on at once, Greenwood notes. And with online court, physical barriers like the size of a courtroom or one’s distance from the courthouse should, in theory, be a thing of the past.

“I understand why it ended up being broadcast, because there were capacity limits and more people wanted to see it than were were able to,” said Greenwood, who sits on the executive for the Criminal Lawyers’ Association, the country’s largest criminal law organization.

“It’s something that we’re going to have to deal with, as the use of technology expands.”

While that expansion has gradually been rolling out, both Greenwood and Spratt still worry about marginalized, vulnerable clients who can’t spend hours on a Zoom call or who live a privacy-challenged life in a shelter or group home.

There have been cases over the past two years, Greenwood said, where people have run out of minutes on their phone and disconnect before a judge can speak to them — with potentially severe consequences.

“If a person doesn’t make their appearance the court can issue a bench warrant for them, which means they get arrested,” said Greenwood.

“We need to think about … not just all the ways lawyers can benefit from this, but how [we] actually make it accessible for clients.”

There are “simple solutions,” she adds, like private iPad stations at courthouses where clients can use Zoom to access their hearings.

I’m pretty biased, just because of my own experience. [But] I think online court works great.– Erin Townley

It’s possible those are on the way: in February, the attorney general’s office set aside $65 million for things like courthouse computer upgrades, new audio-visual technology and staff training.

That announcement followed an earlier pledge in November 2021 to create an “end-to-end digital system” that would move all sorts of routine legal practices online, from scheduling hearings and filing documents to paying fees and accessing court decisions.

As for Townley, herself an Alberta-based family lawyer, taking the virtual witness box in the dangerous driving trial — instead of booking two weeks off work and flying out to Ontario — has sold her on the benefits of online justice.

“I’m pretty biased, just because of my own experience. [But] I think online court works great,” she said. “From a selfish viewpoint, I loved it.”

Federal budget will be a ‘back to basics’ document responding to the chaos in Europe, sources say