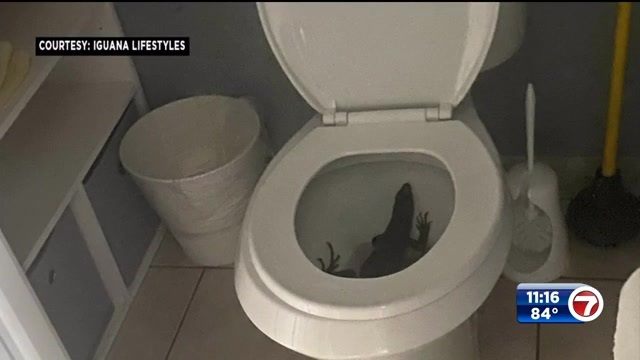 
HOLLYWOOD, FLA. (WSVN) – A trip to the bathroom led to a late night scare for a Hollywood woman who opened the door to find an unwelcome guest in her toilet.

Michelle Reynolds said she had some Saturday night company of the reptilian variety at her home on Sheridan Street.

She said it all started when she decided to fix herself a late night snack.

“I came down last night at 10:30 to make my little treat, as I normally do, and I put it in the microwave and skipped on over to the bathroom and opened the door and did a quick turnaround, ’cause I saw this thing in there, quickly shut the door,” she said.

Splashing around inside the toilet was an iguana.

“Oh, my God, there’s an iguana in the toilet!” said Reynolds.

Reynolds knew her guest wasn’t going just find its way out, so she opted to get some help.

She called Harold Rondan of Iguana Lifestyles to help show the critter the door.

“I just ran in with this pig stick that I have. It’s a little clamp,” he said. “I was able to grab it and pull it right out.”

“This is the second one this week already,” he said.

On Sunday, he showed up at Reynolds’ home and fished out what he said was a Mexican spiny-tailed iguana.

“He was really big,” Reynolds said in cellphone video as Rondan walked out of the bathroom with the iguana.

The homeowner said her toilet is now safe again for sitting.

“He took up most of the toilet bowl,” she said. “I just kind froze. I went upstairs going, ‘There’s an iguana in the toilet,’” she said.

Reynolds said she suspects the iguana might have gotten in though a vent or the sewer.

Uvalde shooting: Investigative report into shooting could be released within 10 days

‘Revolutionary’ plan to save Aussie icon