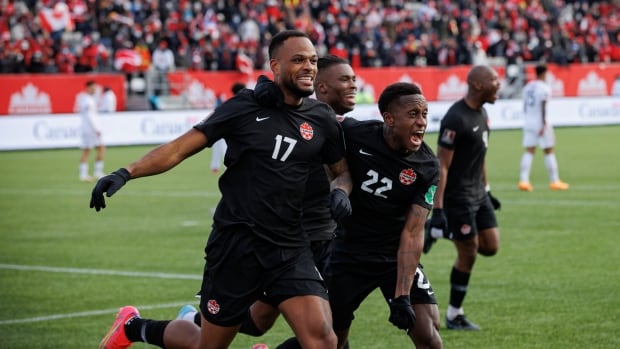 
Cyle Larin scored early and Sam Adekugbe added a late goal as the Canadian men’s soccer team defeated the U.S. 2-0 on Sunday in Hamilton, Ont., to solidify their place atop their CONCACAF World Cup qualifying group as the only unbeaten team.

Canada leads the eight-team qualifying standings with a 6-0-4 record and is on course to secure its first World Cup berth since 1986 — despite missing superstar Alphonso Davies due to myocarditis.

Canada has just four more matches to go in the final qualifying round. The top three teams automatically qualify for the 2022 FIFA World Cup in Qatar.

Larin is LETHAL ?<br><br>Canada takes the early lead in Hamilton thanks to a goal from Cyle Larin <a href=”https://t.co/kMDMDZFGdc”>pic.twitter.com/kMDMDZFGdc</a>

Cyle Larin gave Canada the lead just over seven minutes into the game when he put a well-placed strike past American goalkeeper Matt Turner after receiving a perfect pass from Jonathan David.

It was the Brampton, Ont., native’s 23rd goal for the national side — passing Dwayne De Rosario as the top Canadian men’s goal-scorer in history.