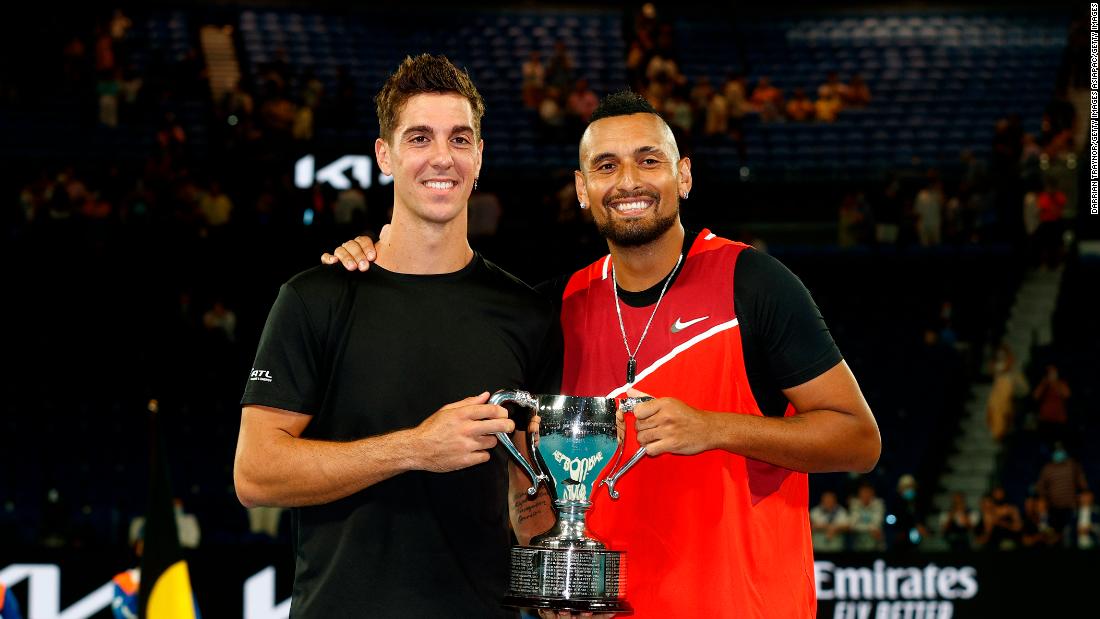 
Kyrgios and Kokkinakis, nicknamed the “Special Ks” as juniors, entertained the crowd at the Rod Laver Arena with a 7-5 6-4 victory under the lights.

They are the first wildcard team to win the Australian Open men’s doubles title in the professional era.

“What a week! It was a super tough match but a great week all around,” said Kokkinakis, who claimed his first ATP title at Adelaide before the Australian Open.

“Nick, I love you brother. Man, I can honestly say we did not expect to even come close to this, but with the help of you guys (the crowd) all week, it was unbelievable. The coverage we got and the support for us, we could not ask for anything more.”

A backhand from Kokkinakis sealed the first break of the match in the 11th game and the duo closed out the opening set on their service game as the fans imitated Cristiano Ronaldo’s famous “Siuuu!” goal celebration to cheer the duo.

READ: Nick Kyrgios and Thanasi Kokkinakis are taking the Australian Open by storm

The duo took a 4-3 lead in the second set after breaking to love before they had a match point denied by their opponents at 5-4.

The pair finally wrapped up the match on serve, with Kyrgios blasting two aces as they won the contest in 95 minutes, completing their fairytale run at Melbourne Park where they stunned top seeds Mate Pavic and Nikola Mektic of Croatia in the second round.

“This week has been a dream come true for me. I wouldn’t wanna do it with anyone else,” said Kyrgios “I am just super happy. I don’t even know how we are doing this, or what’s going on right now to be brutally honest.”

The pair, who thrilled fans throughout the tournament with their entertaining play, are the first all-Australian men’s doubles champions at the season’s opening slam since Todd Woodbridge and Mark Woodforde triumphed in 1997.

Goodlettsville family of 4 dead after father admits he ‘snapped’ | News