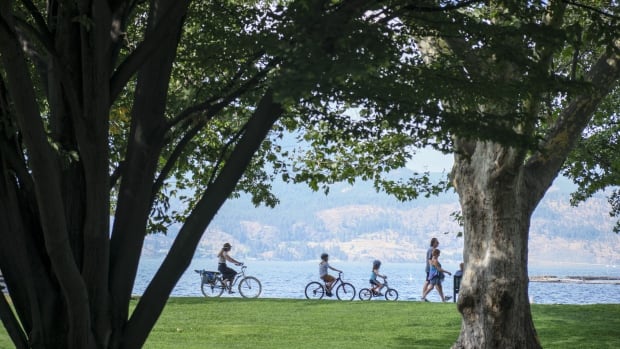 
A new study attempts to quantify what many parents likely already know: dismal activity levels for kids and youth fell even further during the pandemic, while screen time soared.

At the same time, kids succumbed to more sedentary screen time, earning an “F” in that category, billed as “a significant decrease” from the “D-plus” in 2020.

The report card’s 15th edition is based on data collected during the COVID-19 pandemic, a time that put a sudden halt to play dates, sports activities and gym classes for many kids.

For the third time in a row, the ParticipAction report card gave kids and youth an overall grade of “F,” which takes into account physical activity, screen time and sleep recommendations.

ParticipAction’s scientific director, Dr. Leigh Vanderloo, largely pegs the backslide to fallout from the sweeping infection control measures introduced in the spring of 2020.

But she also points to encouraging signs that many families discovered a fresh zeal for outdoor activities during the pandemic, suggesting that if outdoor enthusiasm continues while sports and physical education classes resume, grades could rise again.

“I do think this is going to serve as more of a blip,” Vanderloo said of how the data will be viewed alongside past and future report cards.

“There was this reinvigoration for spending time outdoors. We saw it with campsite registrations, park use — some of them were off the charts, they’ve never seen so much [demand among] people wanting to get outdoors,” she said. “Partly because there weren’t a lot of options, but still, hopefully that’ll continue.”

The public’s embrace of parks, trails and other outdoor spaces for family entertainment and exercise allowed this year’s grade for household support for physical activity to remain a C, while active transportation increased to a C– and active play improved to a D–, from F.

Greater difficulty may be found in reversing the spike in screen use, said Vanderloo, noting that school lockdowns forced kids onto laptops and computers to continue their education while physical-distancing rules drove up social media and screen-based entertainment in lieu of face-to-face friend time.

Add in the draw of TikTok and new, pandemic-era social media stars — not to mention the likelihood that parents, too, have increased screen time — and the challenge of untethering youth from their devices becomes especially tough, said Vanderloo.

Harm-reduction strategies likely won’t work now, she suggests, referring to the tactic as a “finger-wagging approach” that stresses the detrimental effects of screen use.

“I don’t think that’s beneficial,” said Vanderloo, believing people will continue to use screens more than they should.

A more effective strategy might be to enlist the entire family in assessing screen use and finding alternate activities to displace that sedentary time, she said.

“We know children are going to do it, we know that families are going to utilize screens as entertainment, to stay connected with loved ones or even to learn things,” she said.

“So how can we ensure that, while we are using screens, we’re trying to do it as healthily and responsibly as possible? Is it having discussions? Is it co-viewing with the children? Is it designating screen-free zones within the house, like maybe not at dinnertime and not in the bedroom?”

Opportunities to be active not equal

Also important is to examine social determinants of health, including income, education and geography to understand how they affect a healthy lifestyle, added Vanderloo.

It found increases in outdoor time were more likely for children in higher-income families, while car-free streets were generally found in areas that had fewer visible minority populations, as well as fewer households with children.

“It’s not easy to create that space when you’ve got more population density,” Banerji, who was not involved in the report, told CBC News.

Travelling to another part of the city where there are open spaces for physical activity is also difficult when people don’t have a car or can’t afford a bike, she said.

The report card is a synthesis of papers and national-level surveys, but data on marginalized groups is lacking, the study found, which stresses the need for researchers to fill the gap.

“If we don’t have a baseline, how do we help support and really identify what their needs are?” said Vanderloo. “If we’re planning to shift the needle, we need to know. I think I was taken aback just by how little we knew.”

Marginalized children and youth were already facing barriers to physical activity and recreation before the pandemic, Banerji said, such as the cost of sports equipment.

Programs that waive fees and lend out sports equipment are needed to help address that issue, as well as ensuring communities have public facilities where kids and youth can play, she said.