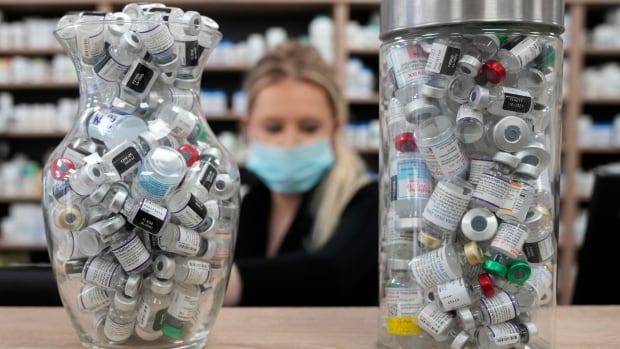 
Dozens of missing COVID-19 death records revealed by the New Brunswick government last week caused health officials to mislead themselves about when fatalities from last winter’s Omicron wave had peaked just as they were faced with critical decisions about when to loosen health protections.

On Friday at a hastily scheduled briefing, New Brunswick’s lead epidemiologist Mathieu Chalifoux revealed the discovery of 142 previously missed “death forms” that listed COVID-19 as a primary killer of 125 people that were previously not counted as victims of COVID-19.

The forms also revealed the virus was noted as being present at the time of death in 17 others.

“Counts during the Omicron wave did not accurately reflect.the situation as it unfolded,” said Chalifoux on Friday

The missing deaths spanned six months between December 2021 and May 2022 as the first wave of the COVID-19 Omicron variant was hitting the province.

More than half of the uncounted fatalities were from the months of February and March.  That’s when New Brunswick health officials were considering and then executing a plan to become the first Maritime province to end mandatory masking and other health protections, including in schools.

On Feb. 24, New Brunswick Premier Blaine Higgs and Chief Medical officer of Health Dr. Jennifer Russell held a news conference to announce dangers from Omicron had subsided enough to allow for an end of the province’s state of emergency and the mandatory wearing of masks in public on March 14.

And they insisted all the data they had in hand supported that decision.

“We got better through COVID in identifying the risks,” said Higgs.

But at the time, the deadliness of Omicron and the trajectory of when its killing had hit a peak in New Brunswick were both being misjudged by health officials because of the missing death records

Up until last week the province had reported Omicron deaths peaked in January at 83 and then declined 24 per cent in February to 63.

Instead, given definitions of what then constituted a COVID death in New Brunswick fatalities should have shown 91 in January had the records not been missing.  Those numbers then would have increased, not decreased in February to 100.

Additional missing deaths from March (31) and then April (26) continued to disguise Omicron’s deadliness and the rate that it was receding through the spring . By May the publicly reported data was so erroneous health officials declared just 14 deaths.  They now acknowledge it was actually 35 that month, 150 per cent higher.

On Friday Chalifoux appeared to blame a poorly executed transition of responsibilities for tracking and reporting deaths away from COVID case and contact management personnel in January for what happened.

In an email, department of health communications officer Adam Bowie noted decisions about lifting health protections in March were based on  “not only death rate” but included many other factors like infection and hospitalization rates, which were in decline.

“As such, we can state that had these deaths been recorded at that point in time, by themselves they would not have been sufficient to change our proposed actions or measures,” wrote Bowie.

Tara Moriarty, an associate professor and infectious disease researcher at the University of Toronto, has insisted since last spring New Brunswick had to be undercounting COVID deaths because the levels it has reported don’t match spikes showing up in its total provincial death count.

She is happy to hear about the discovery of unreported deaths but doubts the province is yet fully accounting for how many have been killed.

“If you underplay what’s going on, then you get exactly what we’re seeing, where people think it’s not serious,” said Moriarty in an interview this week.

“You can’t have it both ways. You can’t make people responsible for making good decisions and not tell them truthfully about what’s happening, including death.”

Last month in its latest estimates, Statistics Canada reported 8,387 people died in New Brunswick in the 12 months ended in June.  That’s 828 more than the previous year, an 11 per cent jump that was the second largest increase among provinces.

New Brunswick has now reported 464 COVID deaths during that year.  That’s still not enough to account for the overall increase in deaths in the province last year, according to Moriarty.

“We need to know why people are dying in unexpectedly high numbers. And if it’s not COVID, we absolutely have to know what it is,” she said.