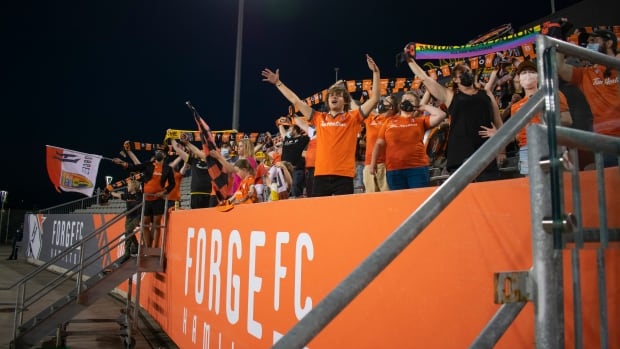 ‘Just like being home again:’ Hamilton sports fans returned to Tim Hortons Field and loved it


After 648 days, Kevin Anderson went to a family reunion. It was with family dressed in orange, black and yellow from head to toe.

The reunion took place under bright lights at Hamilton’s Tim Hortons Field where most were chanting at the top of their lungs.

They were all part of his second family, the Barton Street Battalion.

Forge FC, of the Canadian Premier League, played its first home game with fans in attendance since the pandemic shuttered sports.

“Although it feels a little bit weird because no one’s been out in a crowd … we’re so happy to be back together,'” Anderson said Wednesday night.

“We haven’t sang these songs together in over a year and as soon as somebody starts a chant, we’re all back in it again. It’s like muscle memory.”

The home game marks a monumental moment for sports fans during the pandemic and is a signal life is starting to feel more like it did before COVID-19.

The Hamilton Tiger-Cats are travelling out of province to play the Canadian Football League season opener against the Winnipeg Blue Bombers — the team that beat the Ti-Cats for the Grey Cup — on Thursday at 8:30 p.m. ET.

Also Thursday, the Hamilton Honey Badgers of the Canadian Elite Basketball League are wrapping up the regular season against the Niagara River Lions at the FirstOntario Centre at 7 p.m. ET.

‘We’re getting to the end of the tunnel’

Forge FC fans drove from all around to watch the team play York United on Wednesday and cheer on the home team.

Mario Rodriguez, 37, came from St. Catharines, Ont., and brought his three sons to the stands.

“It feels amazing, it’s nice to get out of the house,” he said. “It’s been tough for the past two years … just work and home.”

Alicia Rosati and her boyfriend Roan Baxter drove from Guelph, Ont. Rosati and Baxter spent the past year following the team on social media.

“It’s nice to be around people and talking to strangers again and be able to have something in common like the game and just connect with people,” Rosati, 25, said.

Kiersten Chapman, 17, sat with her family from Hamilton and said being in the arena felt like “we’re getting to the end of the tunnel.”

Forge played a competitive first half against York United as people banged on drums, waved scarves and flags, and chanted.

In the 54th-minute, York United’s Alvaro Rivero scored to give the visitors the lead. Forge FC’s best chance came in the 40th minute when York goalkeeper Nathan Ingham dove to his right to save a penalty kick from Forge attacking midfielder Tristan Borges.

While his favourite team lost, Anderson still considered the night a win for fans.