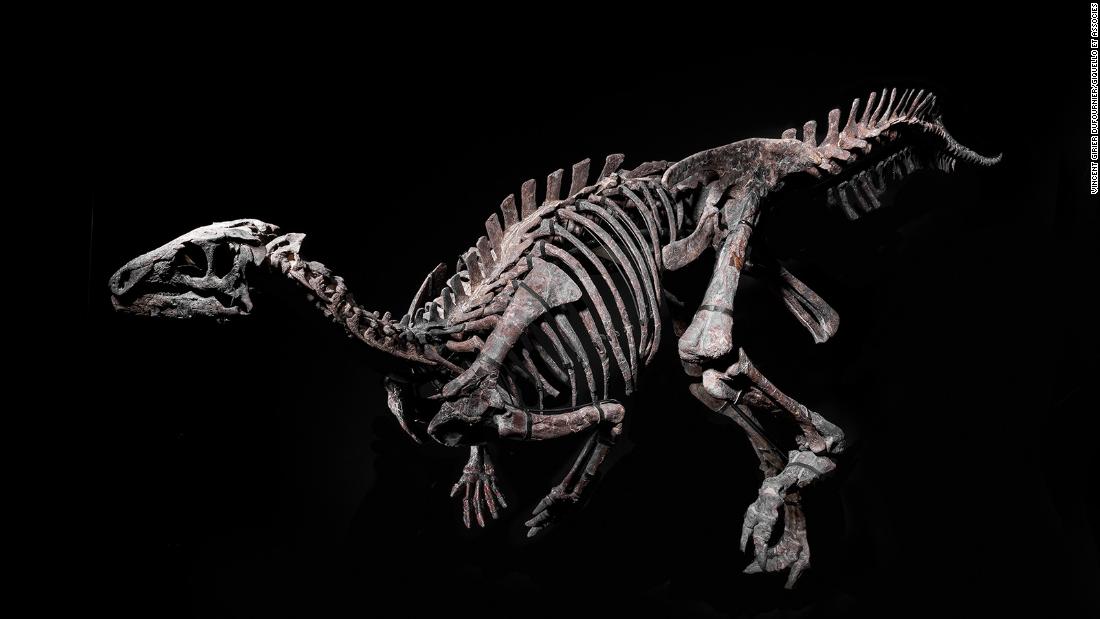 Jurassic dinosaur fossil will go up for auction in Paris

Sign up for CNN’s Wonder Theory science newsletter. Explore the universe with news on fascinating discoveries, scientific advancements and more.

A 150 million-year-old dinosaur skeleton will go up for auction in Paris next month.

Workers discovered the ancient skeleton by accident in 2019 while doing road construction on private land in a quarry along Skull Creek in Moffat County, Colorado, according to Iacopo Briano, the paleontology expert curating the fossil’s sale for the Parisian auction house Giquello & Associés. The site is not far from the Dinosaur National Monument and the small town of Dinosaur, he said.

The iguanodon fossil is one of the latest dinosaur skeletons to go up for auction. Credit: Vincent Girier Dufournier/Giquello et Associes

“Luckily enough, a team of commercial paleontologists — people whose business is investing time, money and energy in digging fossil remains — have been able to recover the remains” that were later purchased by Flavio Bacchia, the founder of Zoic, Briano said. Zoic, based in Trieste, Italy, provides tools and technology for the discovery and preparation of ancient life forms and paleontological specimens.

An iguanodon — a herbivorous species named for its teeth, which are similar to those of modern iguanas — Zephyr is small by dinosaur standards at roughly 10.7 feet (325 centimeters) long, 2.5 feet (75 centimeters) wide and 4.3 feet (130 centimeters) tall. Briano had been “looking for such a small-sized specimen” as the auction house had “so many clients and collectors asking for ‘a dinosaur that can fit my living room,'” he said.

The dinosaur will go up for sale at the Hôtel Drouot, an auction venue in Paris, at 3 p.m. local time on October 20 after three days of public exhibition, Briano said. Natural history enthusiasts will also have the opportunity to bid on 12 to 15 other fossils, including a just over 13-foot (4-meter-long) giant predatory fish discovered in Kansas that lived during the Cretaceous period, a nest of dinosaur eggs from France, and mammoth tusks, he added.

“Let’s say if we do our job properly, we’ll be able to attract enough potential buyers to have small bidding war in the room,” Briano said.

Some scientists have considered auction or private ownership of dinosaur skeletons like Zephyr to be problematic, while others also acknowledge that museum collecting has historically included acquisitions from commercial sources.

One rare find — the ancient skeleton of a Gorgosaurus, which is just over 9 feet (2.8 meters) tall and 22 feet (6.7 meters) long — sold for more than $6 million at a Sotheby’s New York Natural History auction in July. About 77 million years old, the Gorgosaurus species is related to the deadly Tyrannosaurus rex, but faster and with a stronger bite force, according to Sotheby’s. The fossil was discovered on private land in the Judith River Formation in Montana’s Choteau County and was the only one of its kind offered for private ownership, as all other known Gorgosaurus specimens are in museum collections.
“In my own opinion, there are only cons,” P. David Polly, a professor and chair of the department of Earth and atmospheric sciences at Indiana University Bloomington, told CNN in July. “While certainly there is no law in the US that supports this for fossils that come off private land, it’s easy for me as a scientist to argue that that fossil is important to all of us, and really ought to be going into a public repository where it can be studied — where the public at large can learn from it and enjoy it.”

Fossils on private lands in the United States belong to individuals who can do with them what they choose, whereas fossils on public lands are regulated by the federal government and essentially belong to the government or “the people, if you will,” Polly said.

Top image: Pictured is the iguanodon fossil to be auctioned soon.

Man killed by kangaroo he kept as pet