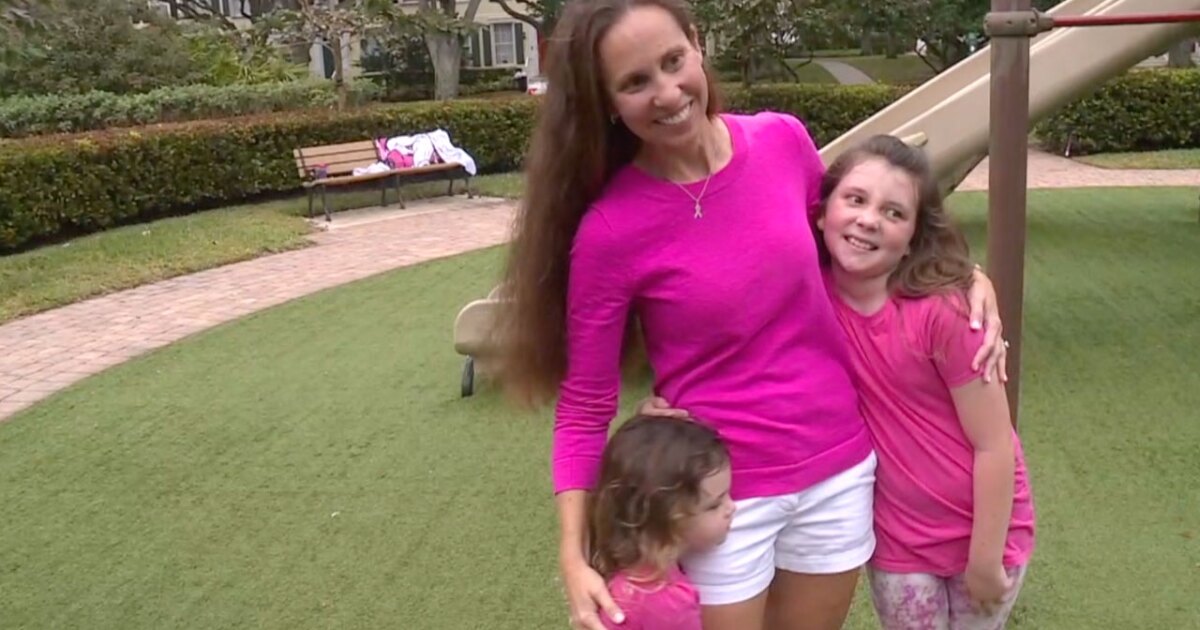 Yes, breast cancer survivors, their families and friends will be decked out in pink, but it’s the stories they’ll tell, the laughter and the tears that will make this annual Susan G. Komen event so meaningful.

A Palm Beach County woman, who will be walking with her family, is hoping to inspire other women who are in the fight for their lives.

You can always find Jupiter resident Jessica Patykula and her 8- and 4-year-old daughters wearing pink.

“Yes ma’am. We are very big on pink,” Patykula said. “I wear pink most days, and my girls’ favorite color is pink.”

But it’s more than a pretty hue. She wears pink with a purpose.

“I was diagnosed with breast cancer on Jan. 25, 2019, while I was still nursing my youngest, Ashton. A lump was found and I went in for a mammogram, ultrasound,’ Patykula said. “A biopsy confirmed stage one-to-two breast cancer. There is nothing that prepares you for a moment like that. It’s gut-wrenching. It just hits you straight right down to your core. Those thoughts race through your head, the future is uncertain, what’s going to happen to me. But then it shifts quickly. You feel like you’re in slow motion, but you’re not. You are actually really going quite quickly through the process.”

Within two months, Patykula had a double mastectomy with reconstruction.

A longtime supporter and volunteer of the Susan G. Komen organization, she soon found herself surrounded by the love of others going through the same thing.

“They came over and bought me flowers, food and whatever else. Gifts for the girls. They’re amazing,” Patykula said.

At the 2020 Race for the Cure, her’s race t-shirts changed from white to pink. Solid pink, signifies survivor.

“For me, it’s empowering to put on that solid pink shirt because it shows how far you’ve come. You feel like you’re among this sisterhood of men and women, who didn’t choose this, but here we are now and we’re in this together,” Patykula said.

She was named a “Warrior in Pink” in 2021 and was the top individual fundraiser. Life was good. Then, three months later, Jessica found another lump.

“That was confirmed cancer as well. So, I underwent a scar revision and risk-reducing hysterectomy and then 34 radiation sessions. So, it’s been a long road,” Patykula said.

She is now healthy and strong. An avid runner, she recently completed the Palm Beach and Disney half marathons.

“I’m very proud of her because she worked very hard to be here with me,” her daughter Leighton Patykula said.

The Jupiter mother offers this advice for women battling cancer.

“It’s the hard things in life that teach you the greatest lessons. The easy stuff, the stuff that’s handed to you, doesn’t teach you things. It’s the stuff you have to fight for and dig deep for. It really gives you an appreciation for life,” she said.

The 2022 More Than Pink walk is a hybrid event. Some supporters will participate in the walk along Flagler Drive in West Palm Beach, while others will choose to walk in their own neighborhoods.